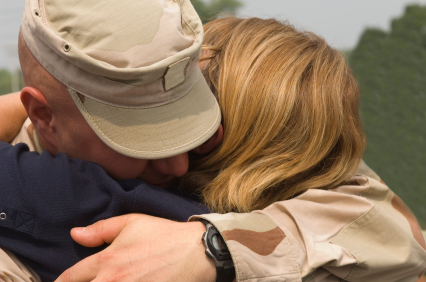 Soldiers are not the only ones who bear the pains of war. Although the soldiers’ spouses do not carry heavy weapons across foreign terrain or fly combat helicopters, they cope with another difficulty — parting with their loved ones as they serve their country from afar.

Sociologist Phillip Fucella, a visiting assistant professor at Oberlin College, discussed the mentalities of military wives dealing with the absence of their husbands in a lecture called “We Have Done Our Part” Monday, Nov. 26. His findings explored how wives living in different contexts — in military communities rather than amongst civilians — view the effects of war as a sacrifice.

“The reason I wanted to ask these questions was out of an interest in pursuing questions derived from social theory and the current state of sociological research,” Fucella said.

Although Fucella was able to successfully conduct over 50 interviews with military wives, he faced questions as to why he chose the spouses as subjects instead of asking the soldiers themselves if they viewed their job as a sacrifice. Fucella chose to interview spouses because soldiers are not allowed to speak candidly about their experiences in the war without the approval of their commanding officers. He also wanted to know if the wives felt they were sacrificing their husbands for the good of the nation.

“Talking to those who love them was what I was going for,” Fucella said. “I think the contest between an individual and society is not as strong as this other contest … between two lovers and society.”

Before he launched into the crux of his findings, Fucella laid the groundwork for his study by discussing why many sociologists had an interest in sacrifice. He explained that the idea of society itself was born from the idea of one person giving himself or herself for the good of the group. This contributes to the sense that communities are more than just a sum of their individual parts.

“Sacrifice, the willingness to give … oneself, sometimes entirely, is proof that there are phenomena that exist on some other register or level than the individual,” Fucella said.

“I tried to keep the units as similar as possible so they could be comparable,” Fucella said.

Although Fucella was sure to keep the subjects of his interviews similar, the results he found between the Army aviation wives and the National Guard aviation wives were very different.

He said that army wives who lived on bases revealed that they understood the hardship of war in terms of commitment to marriage. This is partly because of social fatigue, which results from being in a community where everyone is hammered with the same values, like duty and sacrifice. Because they are constantly reminded that they are making a sacrifice and because many other women have spouses who are also deployed, Army wives who live on bases tend not to think about their families’ military hardships in those ways. Instead, they think of their hardship as the more unique unit of their marriage and focus on commitment to their spouse.

“Regular Army wives react by emphasizing commitment to their marriage, to a relatively smaller social entity,” Fucella said. “They see the hardships and suffering of military marriage is sacrificed for their marital union, not for the nation.”

On the other hand, National Guard wives, who live among civilians, view their military hardship more as a sacrifice to the nation. The primary reason for this difference is that they recognize that they stand out from the people in their community. Outside of military bases, it is relatively uncommon to have a deployed spouse.

“They are constantly reminded about what they’re doing and how special and distinct it is,” Fucella said.

Among the audience members was adjunct professor of mathematics Philip DeCamp, a retired Army Colonel who served two combat tours in Iraq. He stressed the importance of understanding the mentalities of members in other branches of the Army, such as the differences between aviation soldiers and those who serve on the ground.

Another audience member who displayed enthusiasm was Mark Onley ’16. The son of a soldier, Onley appreciated the different sentiments discussed in the lecture. He related to Fucella’s explanation of the feelings of sacrifice certain spouses and families experience when they part with a family member in the military.

“Whenever my dad had to go, it wasn’t viewed as us offering him up. It was an extension of our unit being placed somewhere else, so we were all undergoing that experience together,” Onley said.

DeCamp, too, appreciated how Fucella examined the effects of the war on spouses and families as well as the soldiers themselves. Fucella stressed the strength of the strong the consequences of having a spouse or parent in the military. As a former soldier, DeCamp related to these consequences.

“The Army doesn’t reenlist soldiers, it reenlists families. We see that on the post when [we] walk in,” DeCamp said.