Home Opinions Why having the world at our fingertips will harm our ability to... 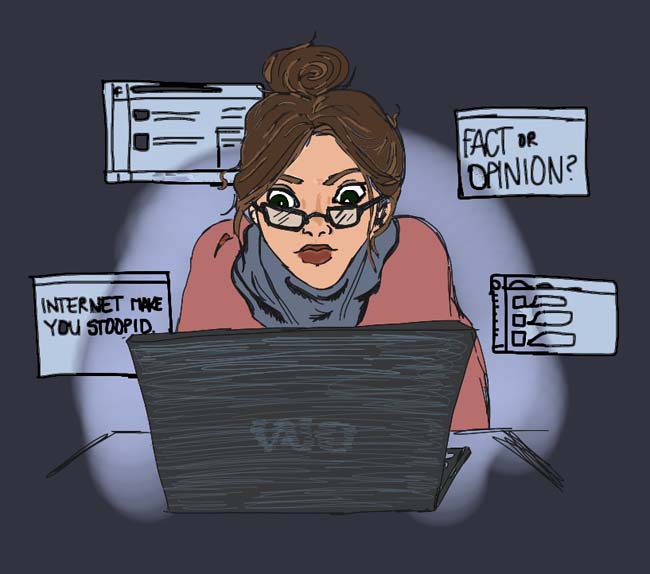 Let’s talk about something that is close to all of our hearts. For most of us, I mean “close” in the literal sense. We rarely go anywhere without it: The Internet.

Although the Internet is something we’re becoming increasingly attached to (or should I say, dependent upon) every day, most of us are grappling with vague feelings of nostalgia and even shame that have arisen from its constant use.

The advantages of easy access to the Internet’s wealth of information are obvious. But what about all of the things that we’re losing intellectually while we’re gaining access to the global encyclopedia/diary that is the Internet?

Our ability to wonder is fading away. With the exception of the ocean’s depths and the unknown stretches of the universe, there is very little left to wonder about. Any piece of information, trivial or momentous, is available to us within seconds. Think about the mechanisms in our brains that are melting into metaphorical mush as a result.

As humans, we tend to rise to the level of performance that is demanded of us. The problem is that very little is asked of us in terms of day-to-day problem solving and long-term memory, so these skills (not to mention arithmetic and spelling) are slipping away.

Our generation specifically faces another problem: as a result of social media and easy access to online publications, we are flooded constantly by information, where facts mingle with opinions and complete falsities.

What’s more, the Internet has given users a platform to voice their opinions to a large audience. The computer monitor creates a protective screen behind which people (informed or not) are more willing to state their thoughts with increased volume and confidence than ever before.

During college, we should be developing our own opinions about the world, but that’s harder to do so when one is flooded with assured — even aggressive — input from both sides. I’m looking at you, over-the-top 2012 election Facebook posters.

Regardless of the topic, we can now type something and send it into the cyber world so easily that many hardly think before speaking their minds. On the other hand, our exposure to so much input has created in us the preference for skimming a lot of writing instead of taking the time to carefully read and consider a few sources.

Our increased access to information is, ironically, causing us to take in less.

In the end, this is little more than a rant, because the Internet has become its own entity — one that is molded by society and that society molds right back. It will be interesting to see where it takes us from here.