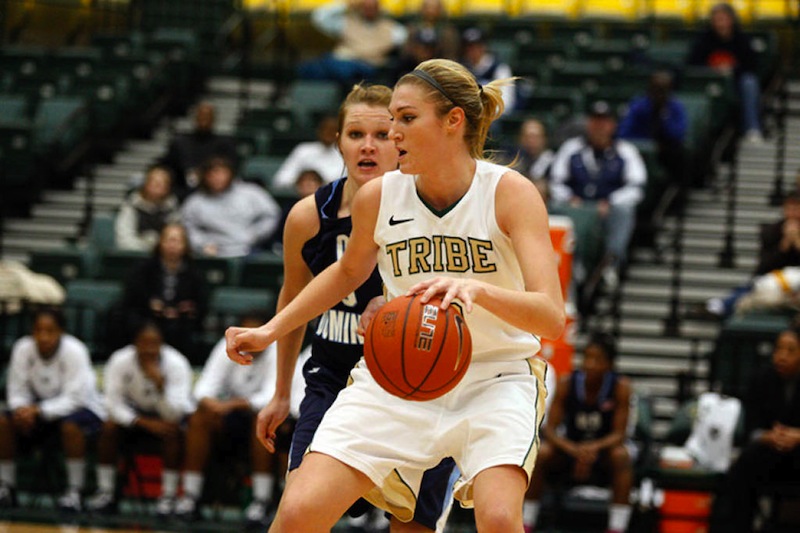 Now at 2-13 overall, the College is still seaching for its first conference win of the year to go along with its four CAA losses.

The Dukes wasted no time taking control of the contest, scoring the first eight points and taking a double-digit lead on a Tarik Hislop jumper with 13 minutes, 11 seconds to play in the half.

Head coach Debbie Taylor took a timeout, but things only got worse for the Tribe from there. On its next possession, sophomore forward KaitlynMathieu coughed it up and JMU’s Jasmine Gill converted a layup on the other end to put the Dukes up 23-10.

The only standout performance for the College was that of senior forward Emily Correal. Correal — who became just the 16th player in school history to reach the 1,000-point mark back in December — was the only player to score in double-figures for the College, finishing with  21points on 8 of 19 shooting and 11 rebounds, another team-high.

After the Dukes took a 41-31 lead into halftime, the College cut the deficit to eight when sophomore guard Anna Kestler connected on a layup. But JMU began to pull away in earnest when Crystal Ross responded with a layup of her own, kicking off an 11-0 run. Finally, when sophomore guard Kyla Kerstetter broke the College’s five minute, 46 second scoringdrought, the Tribe was down 54-37.

Another area that JMU dominated was the glass. The Dukes outrebounded the Tribe 50-33 and pulled down 24 on the offensive glass. All the offensive rebounds ultimately turned into 16 second-chance points for JMU.

Turnovers also plagued the College all night as the Tribe turned it over 17 times and only forced 10 on the other end. The Dukes would finish with 21 points of turnovers to the Tribe’s six.

After Kerstetter stopped the bleeding temporarily, though, the Dukes didn’t let up, launching another 6-0 run that put them up 60-37 with 11:08 left. The College would never pull itself back within 20.

As the College returns home to play just its third game at Kaplan Arena in two months, the Tribe must ponder another sub-.500 year. Barring a fantastic finish in which the College takes 11 of its final 14 regular season, all four of the team’s seniors — two of whom are in their fifth years — will graduate without having finished above .500.

The team is even in danger of failing to crack the 10-win mark for the third straight year, despite Taylor saying she expected this team “to be the best team William and Mary has ever had on the women’s side.”

Of course, regular season records only matter for seeding in the conference tournament in March, and the College will get a chance to get comfortable at home for its next three games.

But that doesn’t mean the road ahead will necessarily be easier, as two of those three are against Drexel and Old Dominion, the first and third-place teams in the conference, respectively.