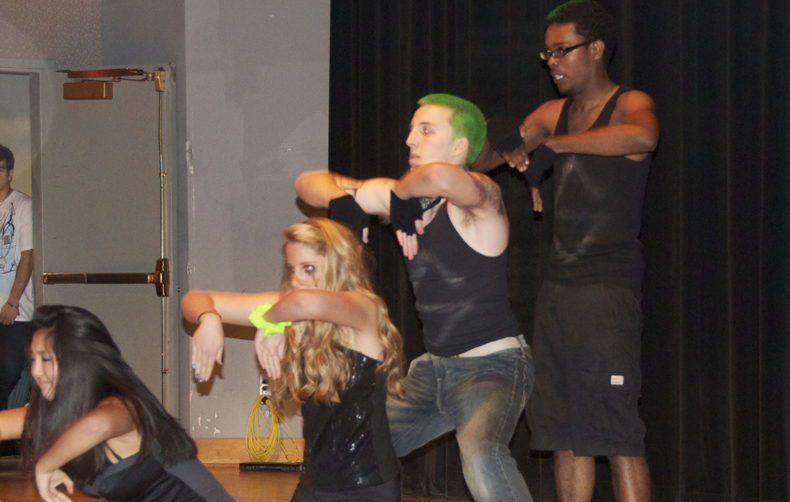 Victor Farrell ’14 only had one proper dance move in his pocket when he auditioned for Syndicate. Waiting to share a wiggle of his arm — more formally known as the wave — with the audience, Farrell walked onto the stage.

“I was talking to my friend about dance, and she was telling me about this group that she was going to try out for. I was like, ‘Okay, what the heck? I mean, I’m not going to make it, but why not go out and meet some dancers?’” Farrell said. “I more or less just goofed around and did the wave, and later I was told that the reason I got on was because I could shake my butt.”

Farrell has been dancing with the hip-hop organization since his freshman year. He currently serves as Syndicate secretary and has choreographed two pieces during his time with the group. He has no formal dance training.

“If you watch everyone’s dances, you see their style and their movement,” Farrell said. “When you go do their dance, they take a while to lay out the dance, and you get a feel for how they move. They keep correcting you, and you just kind of learn through practices.”

Syndicate is just one of many dance organizations at the College of William and Mary, and the only one with a focus on hip-hop. Pointe Blank, on the other hand, maintains an open mind when it comes to the specific styles of dance.

“We have a lot of variety in our group, and we encompass all styles,” Pointe Blank member Kelly Keating ’14 said. “Our biggest is kind of jazzy-type things, but we do have pointe and tap pieces.”

Keating began dancing with Pointe Blank in the spring of her freshman year. With little formal training aside from gymnastics growing up, like Farrell, she has also learned from participating in different choreographed pieces.

“Most people [in Pointe Blank] do have formal training,” Keating said. “Once you audition, everyone does a brief choreography showing their dances and then everyone preferences their dances. Then, the executive board tries to work within the space we have and pairs choreographers with dancers.”

Tracy Brinkerhoff ’14 began dancing when she was three, and joined the modern dance company Orchesis in her freshman year. Orchesis is not just a student organization — it is co-directed by dance department faculty Joan Gavaler, Leah Glenn and Denise Damon Wade, and members must enroll in a modern dance class for each semester they are in the company.

“I initially chose to audition because I wanted to continue my dance education in college,” Brinkerhoff said. “[In the group] I have found a close knit group of people who encourage, support and challenge each other to develop as artists, dancers, choreographers and people.”

“Each professor favors a different style or school of modern, and each student choreographer brings their own experience to the piece,” Brinkerhoff said. “The student choreography adds another dimension to the group by allowing students to take control of their own artistic venture under faculty supervision.”

Syndicate is organized much like Pointe Blank. Choreographers showcase dances at the beginning of the semester, and dancers then choose the dances in which they want to participate. Farrell choreographed his first dance with the help of an older group member.

“Whenever I would think of stuff, I would just do it, do it, do it, and it would look sweet but I wouldn’t remember it,” Farrell said. “She would be like ‘Just dance, just do something,’ and when I did a move that she thought looked cool, she would stop me. We both had the dance memorized by the end.”

Farrell and Keating both view their dance groups as a good stress reliever during the semester.

“Dance just makes me happy. I felt like it was just another way that I could stretch myself. I haven’t done it before, so I was like why not,” Farrell said. “I liked the challenge of learning all of the dances and being the person in the group that was like, ‘Oh, no one can do this — I will learn how to do it.’”

From end-of-semester performances, to performances for other organizations throughout the semester, to breaking out into dance at a party or just before an exam, Farrell enjoys the moves he has picked up dancing in the group.

“The ‘Stereo Hearts’ song is one of my favorite dances that I have learned,” Farrell said. “Last year, I would literally put my headphones in and do the dance and then go in and take my test.”