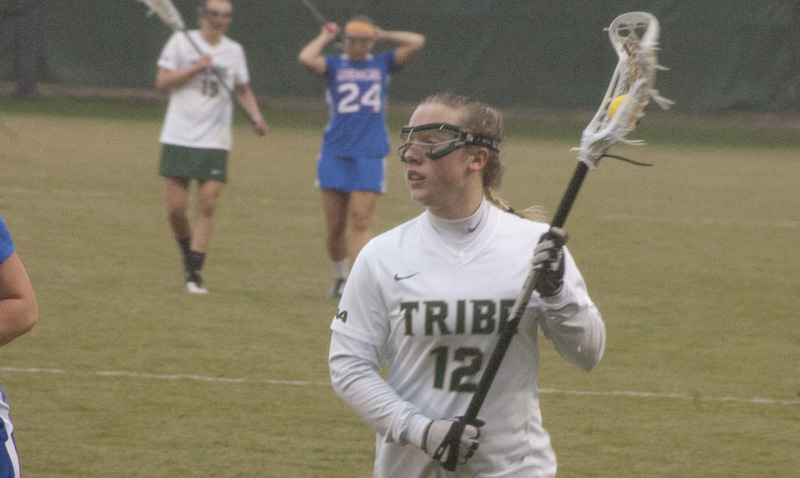 Throughout the last few years, William and Mary has continually scheduled one of the toughest non-conference slates in the country. Just three games into the 2013 season, the College is already in the throes of another challenging non-conference slate. After falling against No. 7 Duke Sunday, the College returned home Tuesday for an early afternoon matchup with No. 13 Ohio State.

The Buckeyes dominated the entire contest, thoroughly defeating the Tribe for a 21-8 victory at Martin Family Stadium. With the loss, the College falls to 1-2 on the season, 0-2 against ranked teams.

Ohio State (1-1) scored early and often, befuddling the Tribe on both sides of the ball. The Buckeyes scored a pair of quick goals in the first four minutes to jump out to a 2-0 lead. Senior attacker Kyrstin Mackrides cut the Ohio State lead to one with a goal at the 25:09 mark, but that would be as close as the Tribe would get all day.

Ohio State utilized a series of runs to slowly build a large advantage against the College. After taking a 2-1 lead, the Buckeyes went on runs of two, three, and four goals to end the half. The Tribe was able to intersperse a few goals inbetween the Ohio State scoring bursts, but Ohio State’s volume shooting propelled the visitors to a 12-5 halftime lead.

The Tribe had its chances offensively, but struggled in Ohio State’s half of the field. The Buckeye defenders consistently pressured the Tribe attackers, causing sloppy passes and turnovers. The Tribe committed a total of 18 turnovers, while the Buckeyes had just nine.

“We got the ball down there, we were just frantic,” Mackrides said. “Instead of communicating, we just threw the first thing we saw, and it ended up in a turnover.”

In spite of the squad’s offensive struggles, there were a few bright spots for the Tribe. Mackrides led the College attack with an incredibly efficient performance, scoring five goals on five shots.

“There’s never a dull moment for Ellen, even when she doesn’t execute the plan, she always comes back and makes up for that mistake,” Ireland said. “So, because of that, we were able to get some goals in the back of the net.”

The Buckeyes, meanwhile, consistently pressured the College defense and converted on their offensive opportunities. Ohio State outshot the Tribe by a whopping 37-12 margin, frustrating the Tribe defense.

“We had a specific gameplan [for our defense], and they didn’t execute it. … They just outshot us. They outplayed us,” Ireland said.

Ireland attempted to change the defensive tempo at halftime by swapping goalkeepers. Junior goalie Colleen Nofi recorded four saves and allowed 12 goals in the first half; freshman Meredith Crizer did not fare much better in the second, allowing nine goals and recording seven saves.

Despite the loss, the College found some positives against Ohio State and will be looking to improve going forward.

“Today’s game was an off game for us,” Shaffrey said. “There were times that we just broke down a little bit and lost some communication, but overall it was a learning experience for the entire team, from offense to defense. Now we know exactly what we have to work on, and we will work through it all.”