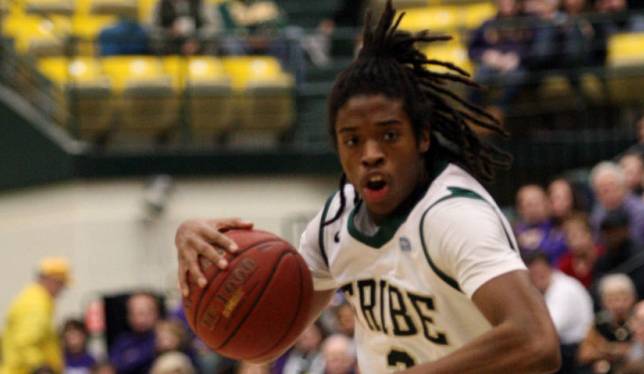 Junior guard Brandon Britt received the inbound pass, advanced it up the court and found sophomore guard Marcus Thornton, who had 12 seconds to equalize the game. Looking for an opening to exploit and hounded by a Dukes defender, Thornton danced around the three-point line before hoisting up an off-balance three ball that clanked off the right side of the rim to end the game.

“We drew up a handoff play for me to come off the ball-screen,” Thornton said. “They switched it and I saw the time running down so I didn’t want to set up for a two and miss. I shot a three and just missed it.”

Thornton’s missed buzzer-beater ended a game that  started as a potential blow-out win. The Tribe dominated the first half, playing excellent all-around basketball that was embodied in its 76 percent field goal shooting. Then, it all fell apart. As has happened so frequently this season, the College limped to the finish line, continually hemorrhaging its lead in the second half, culminating in the Dukes taking the lead and the game in the final minute.

“We just can’t find a way to finish,” head coach Tony Shaver said. “I really think it starts on the defensive end of the floor; we don’t get enough stops at key times.”

The course of the topsy-turvy game was reflected in the incongruous performance of the Tribe’s scoring star, Thornton, who had 19 points in the first half and one in the second. His shooting touch seemed nearly infallible during the initial 20 minutes of the game as he shot  7 for 8 from the field, including five from beyond the arc.    Thornton’s first half performance faded in the second, however, as he languished through  19 minutes of play with just one point and four shot attempts to show for it.

“They didn’t really play me differently,” Thornton said.  “I got a few open looks. I just missed ‘em and that was that.”

The veterans didn’t disappoint. Rum hit a quick three to kick off the game in style, while Howard scored an improbable contested layup on the next Tribe possession. After earning the Tribe a 5-0 lead, all of the seniors save for Rum were pulled from the game. Shaver saw the seniors’s play as inspiration for the Tribe’s first-half performance.

“Senior night [is] an interesting night,” Shaver said. “It was neat to see Doug and Pavloff and Goodloe play so well early. Plus Matt always plays his heart out.”

The Tribe went into halftime with a 47-31 advantage, all the momentum, and a clear chance to make their last game before the conference tournament a confidence-boosting romp of a conference foe.  James Madison’s head coach Matt Brady’s halftime adjustments changed all that.

The Dukes implemented a five-guard rotation for most of the second half and it paid major dividends defensively. The Tribe’s offensive rhythm broke down, scoring only four points through the first eight minutes of play as their ample lead slowly whittled away.  James Madison forced 13  second half Tribe turnovers, while giving up just two of their own.  Junior forward Tim Rustoven scored 12 of the College’s 20 points in the second half, less than half of its first  half total.

Dukes guard A.J. Davis was a constant strain on the Tribe defense all-game, putting up 36, points including five three-pointers. Several Tribe players tried to guard him, particularly Rum, but none found any success as Davis imposed his will on the College’s man marking defense.

After losing to James Madison twice in the regular season, the Tribe will meet the Dukes again next week in the first round of the conference tournament as the No. 6 seed.

“It’s a very exciting league and it’s a wide-open tournament,” Shaver said. “I think a lot of things could happen for us.”

The College tips off against James Madison at 8:30 p.m.  March 9 in Richmond, the final first-round game of the CAA conference championships.