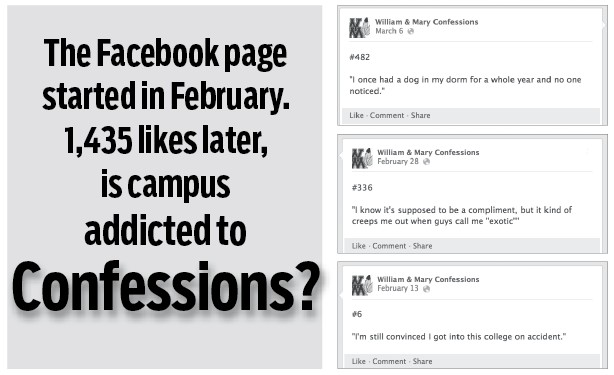 People at the College of William and Mary define the TWAMP as someone who is smart, somewhat nerdy and probably a little socially awkward. A look at the “William & Mary Confessions” Facebook page, however, makes it apparent that the typical College student may also be guarding a secret or two.

“William & Mary Confessions” has accumulated over 500 posts and over 1,000 followers since its creation in mid-February. Similar to “William and Mary Crushes” and “WM Compliments,” it allows users to post statements anonymously, sparking debate in the virtual world and the real world alike.

Consensus among students and faculty seems to be that these pages are a helpful way to express feelings that would otherwise go unspoken. For the student who created “William and Mary Crushes” — intended to be a light-hearted response to “William & Mary Confessions” — these channels of communication are important, even if they take place through a computer screen.

“I definitely think that in-person confrontations are always a lot better, but sometimes people just can’t, so I think this is an easy window out to just get things off your chest,” the student creator of “William and Mary Crushes” said.

“Self-disclosure really is about making relationships,” she said.

Schug qualified this claim by explaining the social penetration theory: When two people begin talking they exchange superficial information. As they begin to share deeper thoughts, their bond strengthens until the two people become close friends. Reciprocity — the dual exchange of information — is critical to this process.

“You’re holding this sensitive information kind of as a hostage almost, and that’s going to strengthen the bond and the relationship,” Schug said.

On the internet, however, the anonymous nature of the forum can undermine the potential for building a relationship. Although users are able to make comments on the posts, there is no sense of reciprocity when the confession is both anonymous and one-sided.

Still, Schug recognizes the page’s value as a potential stepping-stone on the way to feeling secure enough to divulge secrets in person.

“It’s still seeking relational validation but without the negative consequences of potentially putting yourself out there or maybe damaging your existing relationships,” she said.

The posts on the site range in seriousness. On one end of the spectrum, posts clearly written as jokes are scattered between complaints of everyday nuisances like frustrating roommates and overwhelming workloads. And on the other end are confessions of true trauma. Several users have written diary entry-length posts identifying themselves as sufferers of depression, abuse and rape.

Others have admitted to committing acts of violence or abuse. In one post that garnered significant campus-wide attention, the writer confessed to having sex with a girl who was intoxicated to the point where she blacked out and was unable to remember what had happened. A slew of comments both in defense and in condemnation of the writer followed on the page.

Visiting instructor of economics Mitchell Dudley, who was introduced to “William & Mary Confessions” through a student, sees posts like these as an opportunity to open up important dialogues on campus.

“[The post] spurred a very interesting conversation — conversations of what is rape in that context,” Dudley said. “Is the male morally obligated to breathalyze and drug test every person they’re going to end up hooking up with? … It created a really interesting dialogue for about 20 or 30 minutes about where socially … and legally we are and this sort of thing. So, in that sense, I got to know my friends a lot better as a result of this confession.”

Dudley’s experience suggests that the page may still offer opportunities to build relationships, even if the reciprocity Schug cites as integral is missing.

“If I’m one of the people posting confessions, it is a nice way of keeping people at arm’s length while exposing myself a little bit emotionally. So, in that way, it might diminish interpersonal relationships,” Dudley said. “Alternatively, if I’m a person reading it, it creates opportunities for conversations.”

In terms of the benefits of posting confessions, Dudley sees the site as a potential aid to mental health on campus.

“The stress level here is huge … I see some merit in just about any opportunity to release that stress in a fashion that is not self-destructive,” he said. “We have so much issue here with students at or near the point of suicide, and students seeking their de-stressor in the bottom of a liter of liquor. If going on and anonymously confessing to the stress in your life works, then fine.”

However, there is a question as to whether this method of stress relief is self-destructive. Schug said that evidence suggests self-disclosure does not always make the problem better. Conversely, expressing a confession can even make a person feel worse.

This is especially true when confessions are met with negative or demeaning comments. At times, these may serve to denounce an offensive post, but they may also be damaging to a poster who feels like his or her problem has been met with disdain or disregard.

Wade Hodson ’16, who reads “William & Mary Confessions,” credited commenters on generally treating posters with due respect, but he acknowledged that he has seen insensitive comments as well.

“The attitude that some people have toward some of these problems, even these problems that seem trivial — just to get over it, it’s not a big deal, or whatever — can be a really negative thing, especially with bigger issues because it invalidates the experiences, the actual feelings that people are having, and so that can be, I think, a really destructive attitude,” Hodson said.

For students who find themselves coping with any of these problems and looking for an outlet, Schug recommends they take advantage of the mental health services provided by the Counseling Center on campus.