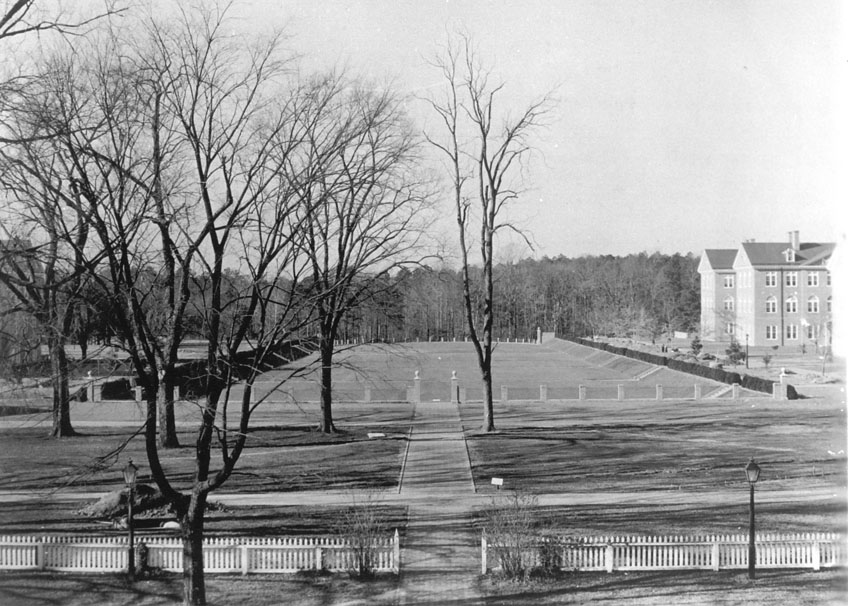 We all learn about the basic division between ancient, old and new campus on our admissions tour, but the growth of campus is a bit more nuanced than that.

The construction of the fraternity complex, the expansion to the Sadler Center and the recent acquisition of the Hospitality House testify to the ongoing evolution of the College of William and Mary’s campus.

Before Williamsburg was even the capital of Virginia, the Sir Christopher Wren building, then simply known as “the College” or “the Main Building,” was constructed. It served as a combined academic building, dormitory and servants quarters.

“It was probably one of the largest buildings in Virginia even going into the eighteenth century,” Senior Architectural Historian for Colonial Williamsburg Carl Lounsbury said. “It was a very large structure.”

The Wren building has survived several fires throughout its existence, the first being in 1705, just years after the school opened.

“You can actually still see traces of that fire on the building,” Lounsbury said. “Lead was used as a lining around the roof to help rain from getting in. The fire melted the lead, and you can see splotches of it on the bricks near the ground level.”

A second fire gutted the building in 1859. The building was rebuilt and briefly featured Italianate towers, only to be damaged again in the Civil War. In the 1930s, it was fully restored to resemble its appearance after the fire of 1705. It was also during this time that the building was officially named the Sir Christopher Wren building.

“During restoration, they came across references made in the 1700s to the design being after Sir Christopher Wren,” Lounsbury said. “But, despite all the hard work of historians there is no documentary evidence he designed the building.”

The Main Building remained the only substantial structure on campus until the Brafferton opened in 1723. The Brafferton initially housed the College’s Indian School, which was disbanded around the time of the Revolutionary War after being deemed a failed project.

Since then, the Brafferton has housed students, the Alumni Association, and the music department, among other things. In 1985, the Brafferton became the location of the President and Provost’s Office.

The President’s house, built in 1732, is the oldest official residence of a college president in the United States. Only Robert Saunders, president ‘46-‘48, didn’t use it as his residence. Many important guests have stayed in the house, including George Washington, Thomas Jefferson, John Marshall and various members of the British Royal Family.

“The President’s house has always been used to host and entertain,” College President Taylor Reveley said. “When you walk on the boards of the house, you’re walking on boards that have been trod by many distinguished guests. But be sure to wear socks or you’ll get splinters.”

Reveley said the house was elegantly decorated with period furniture and decorations.

“My initial reaction was ‘Do I want to live in a museum?’ but I rapidly discovered how comfortable the home is,” Reveley said.

At the beginning of the 20th century, an increase in matriculation and the admission of women caused a need for new classrooms and dormitories. Between the 1920s and 30s Tucker Hall, Ewell Hall, Tyler Hall, Washington Hall, James Blair Hall and several residence halls were constructed.

“They chose brick to replicate what they had on old campus,” Lounsbury said. “Even before Colonial Williamsburg got going, they wanted to preserve the style of the older buildings. These buildings are part of what they call the Colonial Revival.”

The Wren building was originally planned to replicate English universities like Oxford and Cambridge, where indoor space enclosed an outdoor quadrant, or quad, but the plan was never completed. The Sunken Garden was intended to resemble such an area.

“The Sunken Garden is the formal element that brings all the buildings together,” Lounsbury said.

The symmetry of the Garden however was not completed until the completion of McGlothlin Street Hall in 1995.

New Campus was built primarily between the 50s and 80s — during this time frame Phi Beta Kappa Hall, Millington Hall, Jones Hall and Earl Gregg Swem Library were all constructed in what used to be fields and forests.

Chancellor Professor of government Clay Clemens ‘80 explained that, because state funding for the projects was limited, these more modern-looking buildings weren’t built with aesthetics in mind.

Reveley agreed that New Campus lacks a degree of elegance.

“I was just walking on New Campus the other day and was once again struck by the architectural awfulness of those buildings,” Reveley said.

Although New Campus plays host to some of the College’s most famous — or infamous —  buildings, none incite more verbal abuse — or speculation of its structural stability — than Morton Hall.

Morton Hall has experienced many problems since it opened in 1972. It was constructed on a point of drainage for underground streams, causing regular flooding and erosion to the building’s foundation.

“At one point about 10 years ago, one wing began to sink into its own foundations,” Clemens said. “[Facilities management] discovered a gap of something in the order of six feet between the foundation and the ground. During the Christmas break of that year, they brought in trucks of concrete and pumped it into the foundation to prop up the wing.”

Despite the problems Morton has faced over the years, Clemens mentioned it was the first building on campus to have automatic toilets.

The College experienced a recent surge in construction and renovation. The Integrated Science Center, Alan B. Miller Hall, the Jamestown Residences and the School of Education building have all been completed in the past decade. Campus’s newest construction strives to retain the look and feel of the historic buildings while utilizing new technology.

Many buildings for example have received LEED certification from the U.S. Green Building Council.

“[Miller Hall] itself is brick on the outside, and there’s a concrete block envelope right inside of it to help with insulation. These measures [were] a pretty high cost up front, but it’s going to save us a lot of money down the line,” Andrea Sardone, chief marketing officer for the Mason School of Business, said.

Reveley named the completion of the Integrated Science Center — which will fill the open area by Landrum Drive — and the construction of the new Arts Complex as the projects he feels are most important to the College’s future development.

He also emphasized the importance of restoring and renovating existing facilities. Tyler Hall is currently under renovation.

“We have plenty of existing buildings to renovate and improve, so I don’t expect us to expand into the College woods anytime soon,” Reveley said. “Plus, the Druids are very protective of the trees.”