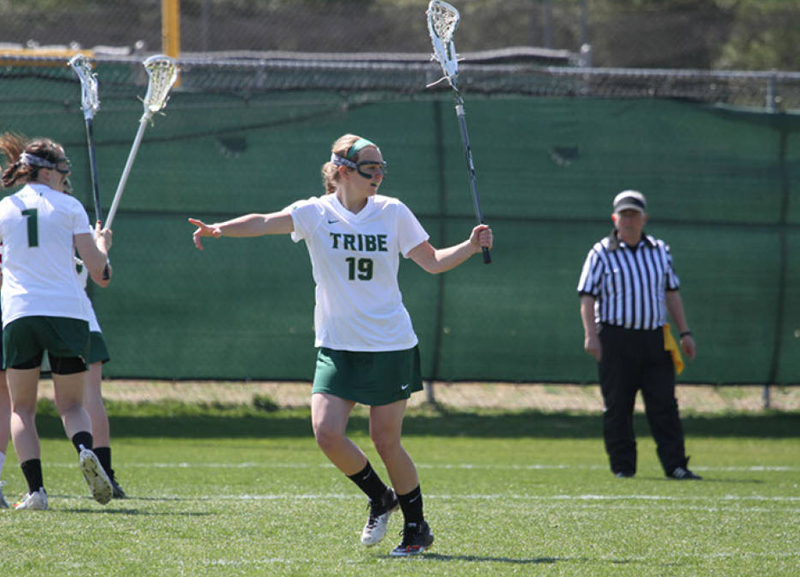 William and Mary’s season took an unexpected turn Saturday afternoon as the Tribe dropped another road game after establishing an early lead. Longwood (7-4) came back from a second-half deficit to top the College (3-7) 12-10.

The match started off quickly, as the Lancers controlled the opening draw and scored a minute later for the 1-0 lead. However, the College’s senior midfield Caitlin Murphy quickly responded with an on-target shot one minute later to tie the game.

The Tribe smothered the Lancers’ offense for the next 10 minutes, forcing five turnovers and holding Longwood scoreless.  During that period, goals from sophomore attacker Ellen Shaffrey and senior attacker Kyrstin Mackrides gave the College a 3-1 advantage with 18 minutes, 48 seconds remaining in the first half.

The Tribe failed to keep pressure on Longwood, and the Lancers scored on consecutive possessions to pull themselves into a 3-3 tie. Junior attacker Taelor Salmon scored a fourth goal for the Tribe just 10 seconds later, but the College’s lead wouldn’t last. The Lancers scored again to tie the score at 4-4 halfway through the first half.

The College dominated the rest of the first half, picking up two more goals from leading scorers Mackrides and Salmon, while holding Longwood scoreless for 16 minutes.  However, the Tribe squandered multiple scoring opportunities with errant shots and turnovers, failing to extend its 6-4 halftime lead.

Offensively, the Tribe out-shot the Lancers 13-11 in the opening half. The College recovered 10 ground balls to Longwood’s seven, but the Lancers won the face-off battle 6-5 to stay in the contest.  Holding a 6-4 advantage, the Tribe simply had to replicate its first half performance to hang on for the win.

But just like the first half, the Lancers needed only a minute to score; they connected on a free-position shot to cut the Tribe lead to 6-5.  After a wild five-minute stretch featuring multiple turnovers from both sides, the Tribe finally responded with a goal from junior midfielder Jenna Dougherty with just over 23 minutes left in the game.

From that point forward, the Lancers seized control of the game. Recovering a Murphy turnover, Longwood scored to cut the lead to 7-6.  After a failed Tribe shot the Lancers raced downfield and scored on the counterattack to tie the game halfway through the second period.

The Lancers recovered the next two draws and denied the Tribe a chance at an offensive possession, instead scoring on both possessions to take a 9-7 lead. As the Tribe scrambled to stop the bleeding on ensuing possessions, it surrendered two turnovers, which ruined any comeback opportunities. The Lancers added another goal — their sixth of the last seven scores — to grab a 10-7 lead with nine minutes remaining.

Though the game had largely slipped away, the Tribe attempted to rally in the last minutes. Salmon scored her third goal of the day to cut the deficit to 10-8, and Dougherty scored her second goal less than a minute later to cut Longwood’s lead to just one goal.

The threat was short-lived as Longwood scored the next two goals to take a 12-9 lead with three minutes left, ending any hope for a Tribe victory.

Although the College added a final goal, the Lancers prevailed 12-10.

The Lancers didn’t dominate any statistical category, barely out-shooting the Tribe and trailing in ground balls and draw controls. The key player for the Lancers was goalkeeper Christian Acker, who stopped ten shots to help stop the Tribe’s offense.

Salmon led the Tribe with three goals, continuing her stellar individual season. The College takes on Drexel at home Friday at 7 p.m.