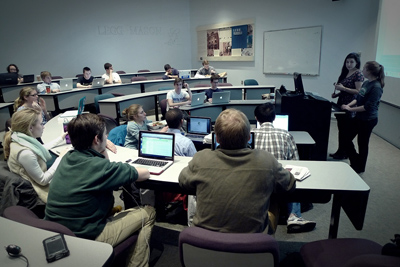 One clause of the Class Presidents Act incited an hour-long heated debate among members of the Student Assembly senate during the weekly meeting Tuesday.

The act, sponsored by Sen. Drew Wilke ’15, requires class presidents to attend all senate meetings and serve on two senate committees. The majority of the bill passed the senate with 20 in agreement and one abstention.

Debate centered on the bill’s third clause, which would allow class presidents to have committee votes on their appointed senate committees. Senators agreed to vote on the clause as a separate amendment to the bill. After debate, the amendment passed the senate, 18-3.

SA President Curt Mills ’13 expressed his support for Wilke’s effort to combat a perceived problem within the SA.

“He has had input from everyone who wanted input,” Mills said. “He’s volunteered his time to work with the new up-and-coming leadership of the Undergraduate Council to see what would work on — what we can all agree is a problem: that Undergrad[uate Council] did not have enough work to do.”

Sen. Colin Danly ’15 raised concerns about giving class presidents a committee vote, emphasizing how it might blur lines between the SA and the Council.

“Class presidents here are elected with the purpose of class president; then they’re moving into their committee,” Danly said. “The main point of my argument about why I don’t like it is that it’s starting to mix the branches. I like the part of this bill that keeps them informed and keeps them interested.”

“Yes, granted this is a bit of blending of the branches of the legislature, but who cares,” Mills said. “These are people who want to volunteer their time to make lives better for students, and this is a more effective way of doing it. Is this bill 100 percent perfect? Might it be somewhat problematic in other areas? Possibly. … But the net value of this bill is enormous. It’s what all the people who[m] it would affect want.”

Wilke noted that the committee vote was only a recommendation, not an actual vote in the senate.

“If they don’t have this, then they’re not having any input,” Bracaglia said.

After significant debate, Danly withdrew his objection, and the amendment went up for a vote.

“I withdraw my objection just because people are pissy and don’t really care,” Danly said.

Danly expressed his frustration that the bill was an ineffective way to address problems in the Council.

“I think notably that the Undergrad[uate Council] is institutionally poor. …  I think we need to change it, and I don’t think this is the right direction,” Danly said. “But senators did bring up a lot of valid points. … I want [the Council] to get more involved; that’s not the issue. It’s more of a constitutional-type, power-structure issue.”

The Lauren Potter Act, sponsored by senate Chair Kendall Lorenzen ’15, would allocate $2,600 from the Activities and Events Fund and $2,600 from the Student Activities Reserve to fund the visit of Lauren Potter, an actress on the show “Glee.” The event will be held at the Kimball Theater with an admission fee of $10. According to Lorenzen, all money raised from the event will be returned to the Student Activities Reserve. The act passed unanimously.

The Student Development Act, sponsored by Sen. Janine Yorimoto GSA Ph.D.. ’14, would allocate up to $3,884 to the Graduate Student Association to cover necessary funding for the Graduate Research Symposium and the colloquia. When graduate students protested the lack of funds given to the symposium and colloquia at a senate meeting March 22, Yorimoto worked with Lorenzen to propose a bill to obtain the remaining funds.

Mills responded to Yorimoto’s request for funding, stating that since the SA does not fund academic activities, he was uncertain whether the symposium and colloquia could receive funds from the SA.

“I know this was funded in years past, but I’m concerned this was a mistake,” Mills said. “If we fund academic things, we open ourselves up to all academic departments lobbying.”