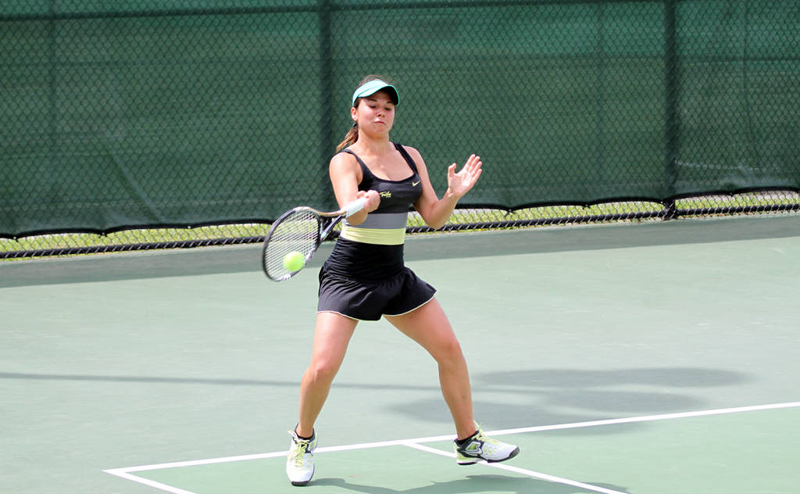 The Colonial Athletic Association conference tournament held at Millie West Tennis Center proved to be little more than a set-piece for an emphatic William and Mary triumph.

While not losing a match over the course of two days in either singles or doubles play, the College captured its 22nd CAA title with decisive 4-0 victories over Delaware and North Carolina-Wilmington. The win was the school’s 22nd in the tournament’s 29-year history.

Junior Maria Belaya led the charge at the No. 1 spot, vanquishing her opponents with little apparent trouble. The Tribe showed its depth of talent beyond Belaya, however, by the quality it demonstrated throughout the tournament.

As soon as play picked up Saturday morning, the top-seeded Tribe cultivated a near-constant stream of success.

The doubles wins against Delaware came in fast and persuasive. Belaya, the CAA Player of the Year, and freshman Leeza Nemchinov, the CAA Rookie of the Year, dispatched their opponents 8-2, while senior Anik Cepeda and junior Hope Johnson clinched the doubles tiebreaker with an 8-4 victory.

In the singles matches, Belaya put in a dominant performance against Danea Jonjic, surrendering just one game in the straight-set match. Junior Jeltje Loomans matched her teammate’s play with an equally emphatic victory over Olivia Helm in the No. 4 spot. Capping off the Tribe win so soon into the match, Johnson defeated Christina Harrington, 5-1, 5-1, to deliver the fourth point needed for a date in the championship round.

Sunday’s final was expected to be a more difficult test, given how tense the Tribe’s February 2 4-3 victory over UNCW was. The victim, however, proved to be the only real change between Saturday and Sunday’s matchups.

“We knew Wilmington was a gritty team,” Thomson said. “We had a close match with them [the] first time around, so we were prepared to have to fight hard and we did that.”

Building on the momentum gained from Saturday, the College steamrolled UNC 4-0 in the final. UNCW ceded the doubles points to the Tribe with little resistance as the pairs of Belaya and Nemchinov and Cepeda and Johnson again swept past their opponents with dominating wins.

“What stood out to me this weekend was our doubles play,” said Thomson. “We looked very determined and aggressive in the doubles matches.”

As in the semifinal matchup against Delaware, the Tribe’s dominance in doubles carried over seamlessly to the singles matches. Belaya finished her match against Angie Sekely with more than enough time to cheer on her teammates.  Displaying a superior command over the trajectory of her shots, Belaya controlled the pace of the game and kept Sekely on the defensive for most of the match.

Nemchinov joined her doubles partner on the sidelines after cleaning up the No. 2 spot against Christina Riley, 6-3, 6-2. With just one more point needed to clinch the crown, the Tribe players started to show some smiles amid their competitive glares. The Seahawks needed to win all of the final four singles matches to take the championship — a desperate, and swiftly dashed, hope.

Loomans claimed the decisive fourth point with a sounding defeat of Alyssa Ritchie 6-2 in the second set after a hard-fought 7-5 first set win. Once victory was announced, the Tribe’s three remaining competitors dropped their rackets and swarmed Loomans in exultation.

“It’s really hard to explain,” said Cepeda. “These girls are fantastic. They’re my best friends, so when you triumph with your best friends, it’s one of the best feelings there is.”

With its CAA title, the College automatically qualifies for the National Collegiate Athletic Association regionals, which are scheduled for May 10-13.