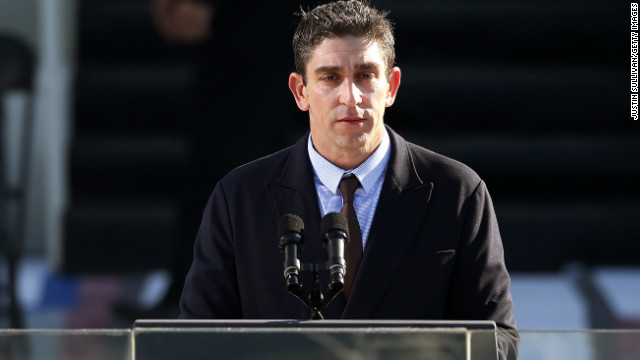 He immigrated from Cuba to America 45 days after he was born. 44 years later, he stood in front of America and recited the inaugural poem for President Obama’s second inauguration — viewing himself as an American rather than a Cuban-American for the first time in his life.

Richard Blanco stood in front of a large creative writing class in Tucker Theater at the College of William and Mary Oct. 29, telling his story and giving advice to students about careers in poetry.

Blanco described the process of being selected as the inaugural poet as “very mysterious.”  One day, he was called and asked if he was interested in taking on the role. His response came readily.

“I’ve been working my butt off for 25 years writing,” Blanco said. “So I showed up.”

Standing before the students, the poet exhibited a relaxed vibe. The top two buttons on his dress shirt were unbuttoned and he wore no tie, his golden necklace appearing near his collar. Blanco’s sport coat had leather elbow patches and he had gel spiking his hair, peppered gray with age.

He described the uncertainty he initially felt when he was asked to recite his poem at the inauguration. Blanco shared his original thoughts with the students in the third person, referring to himself saying, “America isn’t you.”

Blanco described his feelings of being asked to write a poem about a country that he did not quite feel he was a part of, although he had dual citizenship.  One theme in his poetry is his status as a “child of exile” as a gay immigrant. His poems have traditionally been narratives of his life and the lives of his immigrant family living as Cubans in America.

“We’re Cuban, and we love to tell stories,” Blanco said.

Blanco read his poem “Betting on America” — a work about his family watching the Miss America pageant. The family bets small amounts of money on the winner, throwing sums up to $2 in the pot, and compares the American beauties strutting across the stage to the typical Cuban beauty.

As he read his poetry he closed his eyes as if taking himself back to his childhood. He rolled his r’s and almost sang each word, especially when quoting his family.

“Papa refused to bet on any of the Misses because Americanas all have skinny butts,” he said. “There’s nothing like a big culo cubano.”

Blanco emphasized his poem with gestures, tracing curves in the air when saying “culo cubano.”

Chelsea Blanco ’17 attended both the writing workshop and public reading.

“I am Cuban as well and can relate [to] a lot of things he said,” Chelsea said.

In the creative writing class, Richard Blanco discussed giving up the comfort of writing about himself and his family.

He wrote his inaugural poem, “One Today,” intending to incorporate everything that is America, not just the part that was his immigrant family. He incorporated people who lived in the north and the south, people who have worked at grocery stores and nine-to-five jobs.

“I think his ability to talk about his identity as a gay Cuban-American through poetry was amazing,” Ashley Williams ’16 said.

Blanco compared poetry to a mirror, saying that on the other side of the mirror is the author and beside the author is the reader.  As the reader looks into the mirror he sees a blur of lines and lives. People understand something about themselves through reading poetry.

“Hopefully, you will see your life as well as mine,” Blanco said. “I don’t think a poem is complete until it is read and connected to another person.”

“One Today” is an example of this approach. He found a way to stand beside America in front of the mirror.  In the poem, Blanco switched places with the readers and realized that his story was like the readers. It took Blanco reading “One Today” in front of all of America to realize he has always been American.

As he stood before America during the inauguration, Blanco described finally feeling able to expand his writing style from narratives about himself and his family to narratives about the country as a whole.

“Here is your country, this is your story, here is your home,” Blanco said. “I’ve been home all along.”