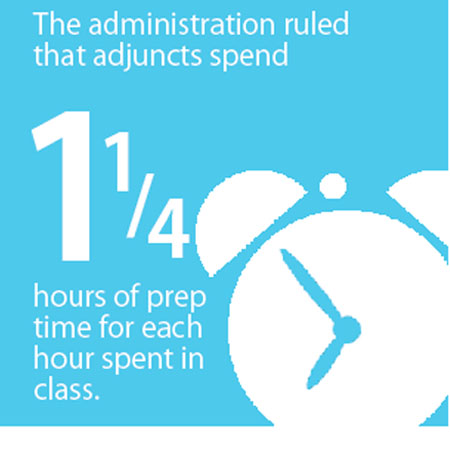 Full -time adjunct professor of English Laura Friedman spent nearly three hours Sunday answering emails as students prepared to turn in their papers Monday. In addition to rereading the material for her classes and planning lessons, she noted that she often spends more than an hour preparing for classes.

Quantifying the amount of work that part-time adjunct professors perform both in and out of the classroom has become a topic of discussion among higher education leaders and public officials.

The Obama administration ruled in early February that colleges and universities should account for preparation time when determining how many hours part-time adjunct professors should work during an average week to see whether the professors are eligible for health insurance under the Affordable Care Act.

Based on recommendations by the U.S. Department of the Treasury and the Internal Revenue Service, the administration ruled that part-time adjuncts should be credited with 1.25 hours of preparation time for each hour spent in the classroom, in addition to credit for office hours and required meetings.

The Affordable Care Act requires that employees who work 30 hours or more per week receive health insurance and allows full-time employees to apply for the Commonwealth’s health benefits plan.

In response to the act, former Gov. Bob McDonnell, R-Va., proposed an amendment to the Commonwealth’s Manpower Control Act, requiring that any part-time state employees work 29 hours per week on average.

The College of William and Mary, as a public entity in Virginia, must limit the work of part-time employees to fewer than 29 hours per week on average. Questions arose about how to calculate time for part-time adjunct faculty members, who typically teach two courses at the College.

“Although I really applaud the recognition that it takes time to prepare for class and assignments … I don’t think it reflects the amount of work adjuncts do,” President of the Faculty Assembly Suzanne Raitt said.

The calculation included time for office hours and required meetings, but Raitt noted that the definition of office hours is more flexible nowadays, especially with email communication between students and professors.

“We spend time with students that isn’t strictly part of an office hour, but what we owe to them as educators and advisors,” Raitt said.

“I think that obviously it’s really hard to make one rule that applies to everyone,” Friedman said. “If you’re teaching a new class that you haven’t taught before, it probably takes you an hour or two hours just to reread everything that you’ll be teaching.”

Keeping track of those hours also becomes complicated, as departments have various guidelines on hours worked by adjuncts. For the government department, adjuncts are expected to work for 40 hours per semester teaching in class in addition to the time spent holding office hours and attending required meetings. The department, however, does not officially track hours.

“We expect courses taught by adjuncts to be well-prepared and up to date, just as we do for a course taught by any faculty member, but we do not count those hours,” John McGlennon, chair of the government department, said in an email.

Raitt, however, did applaud the recognition that classes require more preparation time than just the hours spent in a classroom.

“As those federal guidelines recognize, the hours outside the classroom far exceed those spent in the classroom,” Raitt said.