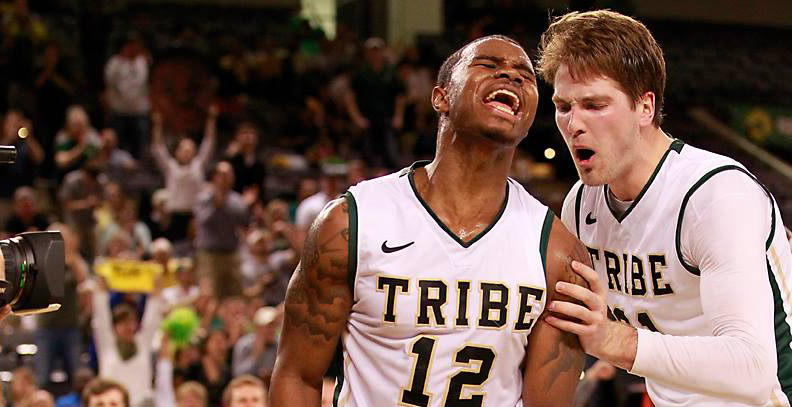 The final score of William and Mary’s 70-59 victory over the College of Charleston in the quarterfinals of the Colonial Athletic Association belies a hard fact: the Tribe’s cause seemed hopeless at the start of the second half.

Head coach Tony Shaver motioned for a timeout less than a minute into the second period with the Tribe down 14 points, and it was easy to believe that the game was out of reach. After all, Charleston’s defense had strangled the life out of the Tribe offense in the first half and early plays indicated that the second wouldn’t be much different.

Whatever Shaver said to his players during that timeout produced immediate results. Seemingly at a loss for answers against the Cougars’ size and intensity, the Tribe surged to a 9-0 run behind a newfound defensive energy that was sorely lacking in the first half.

“We started the half like we played the first half. We did not execute our opening play, had a turnover, and let them drive up the middle of the lane for an uncontested layup,” Shaver said. “I was pretty sure at that point that we weren’t going to win if we continued that process, so I did challenge the guys a little bit there. It’s one thing for the coach to challenge, and it’s another thing for the kids to accept. They bottled it up and played a tremendous 18 minutes from there.”

Senior guard Brandon Britt made it evident to the Baltimore Arena crowd that he wasn’t ready to end his college career. After being the Tribe’s sole beacon of resistance in the first half, Britt led the comeback charge in the second, scoring 16 points. His performance tied that of junior guard Marcus Thornton for the game-high.

“I think the guys did a good job of not keeping their head down,” Britt said. “And everybody just came out in the second half and played hard, did what we needed to get the win.”

Britt and Thornton paced the attack, but the Tribe’s comeback featured multiple players, each stepping up when the situation demanded their efforts.

Sophomore guard Terry Tarpey led the team with eight rebounds to go along with nine points, including 7 of 9 shooting from the free throw line. Besides providing stellar defensive support, freshman guard Daniel Dixon scored seven points — none more important than his deep three-pointer to finally draw the game even at 53 with 8:15 left.

Even with the Tribe’s much-improved play in the second half, auspicious Charleston misses made an undeniable difference. After hitting 6 of 13 in the first half, the Cougars didn’t convert a single three-pointer in the second. Playing against a revitalized defense and shooting abysmally from long-distance, there was little the Cougars’ offense could do to counteract the Tribe’s comeback.

The double-digit victory, made possible by a 21-point scoring differential in the second half, seemed almost routine, even inevitable.

However, the Tribe won’t have long to celebrate the improbable win. Sunday’s semifinal matchup pits the College against Towson, a team that swept the regular season series. Tipoff is set for 5 p.m. in Baltimore.