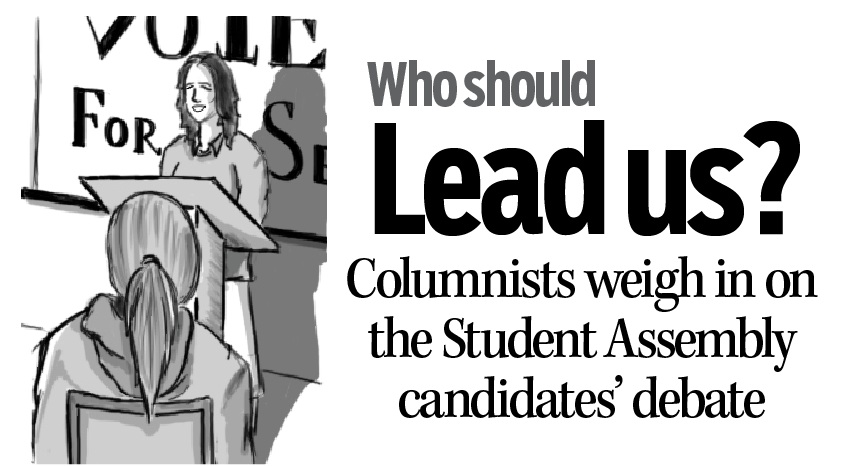 One of the most significant issues raised in the recent Student Assembly debate was the matter of funding student organizations and services given the restrictions of the budget. This question illuminated stark differences between the platforms of Carlton Smith ’15, Colin Danly ’15 and Trevor Parkes ’15.

Perhaps the greatest variance in platforms came up between Smith and Parkes. On the one hand, Smith offered a leveling solution when it came to the budget. He proposed using some of the funds from large, more popular student organizations in order to fund smaller and lesser-known clubs.

In contrast, Parkes suggested prioritizing student clubs and organizations based on their influence on campus. Based on which groups affected the greatest number of students, Parkes’s platform recommended greater subsidies allocated toward more active student groups. In essence, Parkes and Smith are on opposite sides of the spectrum on the issue, with one promoting efficiency and the other advocating redistribution.

Danly advocated a broad approach to the issue, suggesting increased funding for student clubs and organizations across the board. This, he noted, means suggesting reforms to the SA budget as a whole.

Given these solutions, Danly’s method would appear to be the most moderate tactic of the three, as it refrains from prioritizing certain groups and organizations over others.

However, it is also apparent that the platforms of Parkes and Smith would have a much more immediate impact on the allocation of SA monetary resources in the 2014-15 academic year.

In all, each of the candidates put forward a strong case for their distinct approaches to the issue.