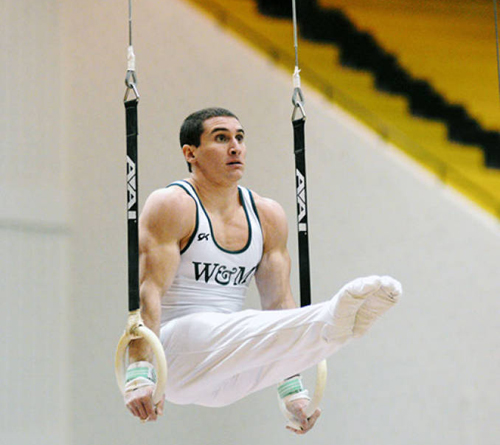 William and Mary concluded its historic season at the only place that could quench its ambition — the National Collegiate Athletic Association Championships in Ann Arbor, Mich.

A pair of brilliant individual performances punctuated the program’s first team trip to the NCAA Championships. Senior Landon Funiciello finished fourth overall in the rings competition, good for his third All-American honor. Funiciello tied for the most in program history. Sophomore Neal Courter fell just out of All-American status in the vault competition, finishing 11th.

The Tribe finished last in the first session of the team competition Thursday. William and Mary garnered a final team score of 415.350, while Oklahoma won the session with a score of 440.000.

Junior Michael Deltz recorded the Tribe’s top score in the high bar with a 13.95. Sophomore Keaton Ackerman led the team during the pommel horse with a score of 14.2.

Funiciello’s score in the rings dipped slightly Saturday, as he scored a 15.60. Nevertheless, the performance was good enough to solidify his place in the event finals and earn him another All-American honor. Courter and Patterson fell short of qualifying for the finals in the vault and the parallel bars, respectively. Courter finished sixth in the vault last year and fell just shy of repeating as an All-American.

Oklahoma’s Michael Squires repeated as national champion in the rings with a score of 15.80. Funiciello, who finished second behind Squires at the competition last year, earned a score of 15.45 Saturday, good enough for sixth but below his normal scores. Funiciello’s sixth place finish ties his finish freshman year. The end of the NCAA Championships marked the conclusion of one of the most decorated gymnasts’ careers in program history.