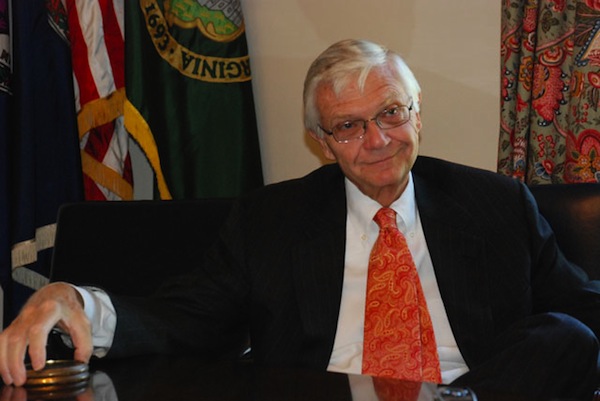 College of William and Mary President Taylor Reveley likens his introduction to college life to drinking water out of a fire hose — so if moving in, starting orientation and saying goodbye to family seems overwhelming for just one day, that’s because it is. It’s not uncharted territory, though. In his six years as president of the College, Reveley has seen thousands of students face the same challenging situations, and draws on his own experience to help guide new students in the right direction.

“The most important thing I had to deal with initially was, there was a huge amount of information coming at me, and it was almost like trying to drink out of a fire hose,” Reveley said. “Just this torrent of information about the school and everything going on on-campus, not just academic. [There are] all sorts of new people to meet, all sorts of places to figure out, like where you find food. Just a whole lot coming at you, and how do you sort your way through it? What do you need to deal with immediately? What can wait a while?”

When your academic, social and home lives are all on one campus, it can be difficult to sort out what needs to get done first. Barring varsity athletes whose class, study, extracurricular and social schedules more or less make themselves, most students need to put the pieces together on their own. Reveley recommends starting with academics and filling in the blanks from there.

“Just focus on what matters the most right up front, and I think that will be — from an academic standpoint — what courses are you taking, where do they meet, and how do you get into gear with those courses, number one,” Reveley said. “And number two — it’ll be getting to know your roommates, getting comfortable in the room, in fact, figuring out where you go to eat, and just getting the living arrangements nailed down and reasonably comfortable. And third, start making some friends. A lot of people will come to campus knowing very few, if anybody, else. That’s a great opportunity, but it’s also a somewhat daunting experience, so you need to work on that. Then you can begin to figure out, out of the extraordinary, rich array of an extracurricular nature and a co-curricular nature, what else you might want to do.”

Once you have registered for classes, attended the student activities fair, and gotten to know your hallmates through one-too-many icebreakers, it may become clear that prioritizing is easier said than done. For extra support, Reveley said academic advisers are the primary resource to turn to for help in the realm of classes, and the Dean of Students Office can address more serious problems.

Basic time management, however, comes down to the individual. For Reveley, the biggest “freshman don’t” is embracing the new freedom that comes with college life without accepting the responsibility on which it is contingent. The balance between the two is different for everyone, but the first step toward finding it is deciding to try.

“There’s no template. There’s no guidebook,” Reveley said. “It’s a matter of understanding yourself and understanding in the first instance that you do need to think about managing your time. It won’t manage itself.”

That being said, Reveley acknowledged that students at the College often get wrapped up in little things. Being conscientious and ambitious is one thing, but Reveley’s advice is not to obsess. A perfect GPA should not be the goal if achieving it involves sacrificing a class you would love to take but might not do well in. Similarly, no student — much less a freshman — should be worried about making lots of money in the first year after graduation, Reveley said. He added that he would rather graduates walk away with lasting relationships and the ability to think rigorously and communicate effectively, than with a 4.0 and lucrative job prospects.

“I think that if you have a really powerful and good undergraduate experience, it in large part sticks with you for life,” Reveley said. “They always say ‘William and Mary is not for the time you’re on campus,’ simply; it’s for life.”