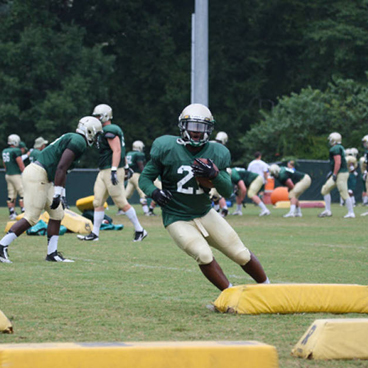 William and Mary fans have gone home wondering what might have been if the College had clinched unlikely victories over Football Bowl Subdivision programs. A 7-6 loss to Maryland in 2012 and the more recent 24-17 loss at West Virginia last season have shown the Tribe’s ability to flirt with upsets.

“Oh, it’s a tremendous challenge to our players but it ought to be a terrific atmosphere,” Laycock said.

The College will look for the upset again this season, as the Tribe faces National Collegiate Athletic Association Division 1-A Virginia Tech in Blacksburg, Va. Saturday at 4 p.m. While the College has shown both tenacity and ability to compete with FBS teams in season openers, the Hokies have had greater success than both Maryland and West Virginia. Nonetheless, here’s the breakdown of Saturday’s matchup.

Running back, however, is a unique position for the Hokies. Tailback coach Shane Beaner commented that “each guy has a unique skill set” in reference to his six — that’s not a typo — six running backs. For most of the past decade, Tech has found success in the ground game thanks to athletes like Kevin Jones, David Wilson and Ryan Williams.

But the Hokies have had no feature back and relied upon the 6’6”, 250 pound Logan Thomas — another NFL draftee — since 2012. With a new quarterback and an unsettled running back situation, the Hokies’ offense may struggle. It ranked No. 102 in total offense in the NCAA last season.

The Tribe, however, have four reasons why the Hokies’ punter may be taking the field early and often. With four preseason all-conference players on a defensive unit that ranked eighth nationally in total yards allowed last season, look for junior linebacker Luke Rhodes and senior linebacker Airek Green to shore up the inside of the defensive unit. In the secondary, junior cornerback DeAndre Houston-Carson offers a strong pass deterrent. Senior defensive end Mike Reilly, who led the Colonial Athletic Association in sacks last season with 11.5, said he feels confident in his unit.

“I know we have playmakers on our side of the ball, and we can come of there with a win,” Reilly said.

Senior receiver Tre McBride appears primed for a strong season. A preseason all-conference pick, McBride may provide the necessary spark for an upset.

Virginia Tech remains one of the best programs in the Atlantic Coast Conference, with the fourth best defensive unit in the nation. Defensive coordinator Bud Foster has built a defensive powerhouse over the years, and won’t make Tribe sophomore quarterback Steve Cluley’s job any easier.

Laycock said that Cluley is, “going to have to rely on players like tight end Bo {Revell} and Tre McBride and running back Mikal Abdul Saboor.”

Though the College has a solid veteran in preseason all-conference junior center Andrew Jones, the left side of the offensive line will be comprised of first-time starters. Freshman left guard Connor Hilland  and freshman left tackle Chris Durant have size and strength, but no game experience.

Special teams-wise, the Hokies special teams are renowned for big punt returns and blocked kicks. McBride won’t have an easy time as a returner, and Tech returner Kendall Fuller is primed to break a long return.

Virginia Tech head coach Frank Beamer, though, doesn’t discount the chance of an upset. “We’re in for a dogfight [against William and Mary,]” Beamer said. “Get ready for it.”