Home Opinions Columns Sororities should not be bumpin’ 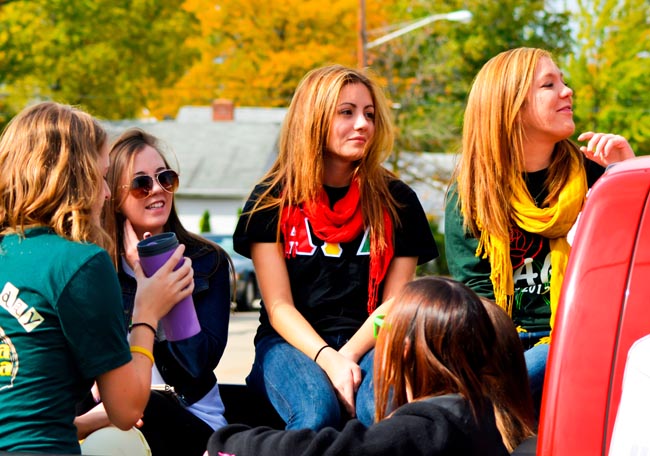 It’s week two at the College of William and Mary, meaning fraternities are mid-rush, and this coming Friday, sororities will be too. Regardless of whether you’ve been through the whole rush ordeal or not, you’re probably aware that much of the process is very superficial — looks, attire, ability to make meaningless small talk: they’re all taken into consideration.

After all, many of these same superficialities are how we choose our friends, regardless of circumstance. However, there is one aspect of sorority recruitment that I just recently became aware of, and which makes me uncomfortable: “bumping.”

According to Sororitygirl101.com — which I hopefully will never again have to use as a source — “bumping is a process used during formal recruitment to allow a smooth transition between the sorority girl who initially has picked up the PNM [potential new member] at the door and the next sister who has come into the conversation.”

Bumping is not exclusive to the College, as sororities all over the country practice it. It makes sense: Sororities are big, and bumping, I’m sure, makes getting to know PNMs much more efficient. But that this process has a name, and that sororities spend time practicing their bumping, is a bit discomforting, even though it is not entirely surprising. It feels like something taken out of  “The Stepford Wives.”

Besides the chill that the word sends up my spine, the problem with bumping and, more generally, with intricately planning social interactions, is that it doesn’t leave much room for the spontaneity in which the magic of friendships lies. Rather, bumping is indicative of the part of Greek life that I most dislike: the commodification of friendships.

Abstractly, rush is a period in which each Greek organization aims to make more new friends and friends who are in some nebulous way better than the new friends every other Greek organization is making. Bumping strikes me as a commonly held business practice in which PNMs become anonymized objects, spinning along a paisley — or perhaps better read as “pasty” — conveyor belt. And the irony is that the process is one with a purported purpose of getting to know individuals who might be right for the club.

But how is it possible to get to know someone if you can only talk to them for minutes before someone bumps you out of the conversation? Why not just digitize the whole process? It could be like Greek Tinder, where sisters look through a few high quality mirror selfies, read a bio, chat a bit and ultimately either swipe left or right.

Besides being more efficient, Greek Tinder would spare sororities and PNMs all the uncomfortable parts of rush, from dressing up to remembering names. And perhaps best of all, as long as each sister has the app, there would be no need to bump another sister out of a conversation; instead, each sister could have autonomy over her own swiping.