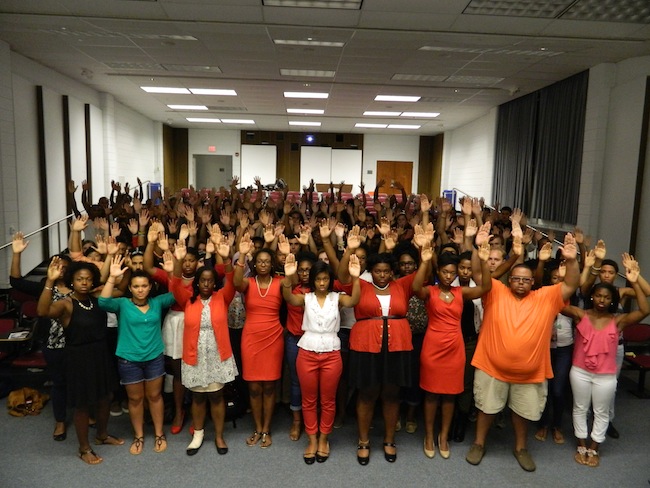 This Friday, the Mu Upsilon chapter to Delta Sigma Theta hosted “#HandsUp: a Memorial,” an event that aimed to educate students about police brutality and encourage activism against it. The event was held in response to the recent shooting of Michael Brown, an unarmed African American teenager, by a police officer in Ferguson, Mo., as well as recent similar shootings of unarmed African American men in America by law enforcement.

#HandsUp included musical performances by the American Sign Language Club and Ebony Expressions. It also included statements on the issue of police brutality against African American men by a variety of clubs, including the Muslim Student Association, which spoke about perceived injustices against Muslims by the police in America.

The event culminated with a forum during which a microphone was passed through the audience and students and faculty took turns sharing their thoughts. Several participants expressed their anger about police brutality and what they perceived to be an inadequate response among their peers and the media.

One comment that was reiterated throughout the group discussion originated from a personal statement from Student Assembly vice-president Kendall Lorenzen ’15.

“We are starting a conversation that is not going the end here,” Lorenzen said.

Lorenzen also urged participants not to forget about the shooting of Michael Brown.

According to Johnna Moore ’16, a member of the Delta Sigma Theta sorority, that thought inspired the #HandsUp event.

“Because [the shooting in Ferguson] happened this summer, I had this anxiety that people would forget Ferguson or just be like, ‘Okay this happened, we are really upset,’ and then once we get to school no one continues the discussion,” Moore said.

Another Delta Sigma Theta member, Rae-Mischel Cooper ’16, mentioned that she doesn’t feel that many students want to discuss issues of race or police brutality, but she emphasized that that discomfort was reason to encourage conversation.

Like Moore, Cooper emphasized the importance of the event that transpired in Ferguson.

“There are things that each of us can do to make sure that it doesn’t stay a moment but becomes a movement,” Cooper said.

Chantell Tait ’16 was glad that the event focused on initiating change, instead of simply discussing police brutality.

“The Deltas did a great job of creating an event that was less of a memorial and more of a place to come together and think about how to bring this issue into the national conversation in a sustainable way that creates real change,” Tait said. “I really liked the idea of the ‘pledge hands,’ because it forced the audience to make a commitment that they could hold themselves to.”

According to Moore, the “pledge hands” were meant to be a community activity, where everyone “[received] a paper hand and [could] make the pledge themselves” by writing a personal pledge on the hands.

“It’s kind of a desperate plea because we had the ‘black power’ movement, where it was closed fists, and now we have open palms to show that sequence of events,” she said. “We’re taking that narrative and making it of empowerment.”

The president of Delta Sigma Theta, Brielle Welch ’16, described the reasoning for hosting this event.

“We are dedicated to letting the world know, and letting people know … I feel the women in this chapter are dedicated to making sure that the William and Mary community and the Williamsburg community know that we are here to serve them,” she said, “I think that #HandsUp is a great opportunity to take an issue that has plagued our nation and for us, the Mu Upsilon chapter, to take a stand against it.”

Rachel Cook ’16, saw the event as a way to bring together students who feel strongly about stopping police brutality. It’s somehow comforting, she said, to see so many others who came together after the events in Ferguson.

“I think events like the #HandsUp memorial are important because they not only address issues of racial profiling and violence, which people often don’t want to talk about, but also because they bring people together to show us that we aren’t alone in our anger,” she said, “Seeing so many people in a room is a kind of comfort but is also a reminder of how much there is still to do, considering how many empty chairs there were, which I think can be either inspiring or discouraging. I’m going to go with inspiring.”