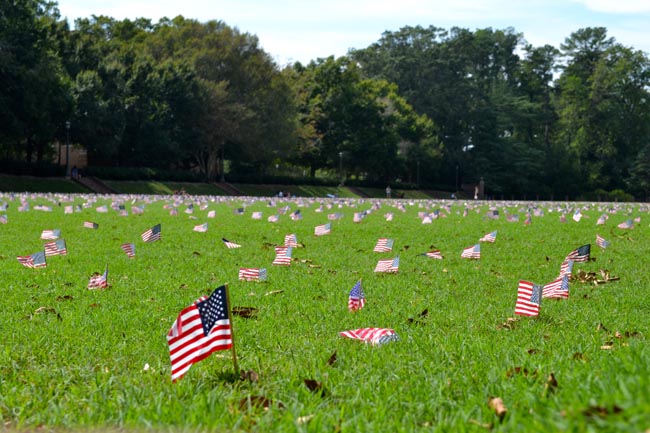 It isn’t etched into memory by routine, like the Pledge of Allegiance. It isn’t faintly recollected, like the Constitution’s Preamble or the Declaration of Rights.

It is entirely ignored.

It is the first chapter of Title IV of the United States Code, and it deals with the American flag. The College of William and Mary showed its utter disregard for ten sections of that chapter last week, disrespecting the American flag in the process.

The Young Democrats and College Republicans filled the east end of the Sunken Garden with American flags last week, paying tribute to those lost Sept. 11, 2001. When coupled with the Queen’s Guard at the head of the Sunken Garden, the scene leaves passers-by with strong emotions. It’s a high-quality, well-executed operation and deserves due credit.

The scene the following day, however, demands accountability. Shreds of the flags sat in the grass. Heaps of the miniature flags sat discarded in piles. What had instilled pride and patriotism now left a bitter, sour taste.

A flag that unified a country hours after the Sept. 11 attacks lay abandoned. The flags planted each year in the Sunken Garden, which supposedly pay tribute to nearly 3,000 victims, are tossed aside as if a hindrance.

Of course, the flags can’t stay on the Sunken Garden indefinitely. Removal is necessary, but disrespect for the American flag is not. The College disagrees, though, finding no issue with running afoul of the U.S. Code in the process.

Practicality excuses some practices of the Sunken Garden tribute. Processes of raising and lowering the flag, for instance, are moot. Other practices violate the U.S. Code.

4 U.S.C. § 8a states: “the flag may be displayed 24 hours a day if properly illuminated during the hours of darkness.” Streetlamps don’t cut it.

4 U.S.C. § 8b reads: “The flag should never touch anything beneath it, such as the ground, the floor, water, or merchandise.” The Sunken Garden counts as ground, no way around it.

There’s even a line about disrespect. The preamble of 4 U.S.C. § 8 begins: “No disrespect should be shown to the flag of the United States of America.”

Proclamation 2605, 9 F.R. 1957, 58 Stat. 1126 (1944) notes that, among other items, the U.S. flag “is universally representative of the principles of the justice, liberty, and democracy enjoyed by the people of the United States.” That same flag was unceremoniously tossed aside hours after Patriot Day.

I am guilty. I passed by the flags and swallowed my disgust. The College is guilty. Regardless of who initially tore up the flags, everyone who passed by and took in the disgraced flag is guilty.

If not guilty of outright disrespect, then all involved are guilty of inaction. Heaping the flags into scattered piles deserves no less shame than those who idly observed. The standard you walk past is the standard you accept.

The Sept. 11 tribute planning and organization must not end Sept. 12. Just as the days, weeks and months following the attacks must not be forgotten, the proper removal of the American flag must not be an afterthought.

Pay tribute to those victims, but not at the expense of the American flag. Show the flag as much respect as flights 11, 175, 77 and 93 deserve. Show the symbol of our nation the same respect the victims of the 9/11 attacks deserve.