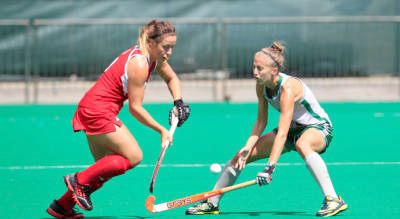 Duke gained a stranglehold on the match by burying two goals in the opening 10 minutes. The Tribe (1-7) was unable to score, despite a good fight for possession throughout the game and a few close shots on goal.

Duke (7-1), of the Atlantic Coast Conference, came to Williamsburg to shake off the first defeat of their spotless season, as the Blue Devils fell to Virginia Friday. Duke redeemed itself, shutting out the Tribe.

Blue Devil forward Ashley Kristen scored the game’s first goal, and her second goal of the season, four minutes and 41 seconds into the first period. She scored on a high shot that junior goalkeeper Meredith Savage couldn’t reach. The ball slipped past Savage’s glove and into the back of the net, granting the Blue Devils an early advantage. Blue Devil forward Martina Chichizola expanded Duke’s lead with another goal just three minutes later, using the same technique after a pass from Kristen.

Tribe head coach Tess Ellis attributed the loss to a lack of focus during the first quarter.

The Tribe couldn’t respond to Duke’s early lead or keep pace offensively. Duke out-shot the Tribe 9-2 in the first period. Despite the somewhat even possession, the Tribe couldn’t break through the Blue Devil’s defensive line. The College also failed to capitalize on several goal opportunities, specifically on the four penalty corners.

“[Blazing’s] very good. … I had actually spoken to the coaches at ODU and they said the difference [between Duke and] ODU was their goalkeeping,” Ellis said. “We got shots on them, which is great because I’ve watched film of other schools that certainly didn’t threaten their goalkeepers; whereas she had to come up with some big saves.”

Blazing made a total of three saves during the game, two coming in the second period. Savage alleviated the magnitude of the Tribe’s loss with some powerful stops of her own. Savage tallied nine saves, helping to keep Duke’s total from increasing even more.

Chichizola added another point to Duke’s score off a rebounded save near the post, just three minutes before the finish to make it 3-0. The Blue Devils finished the game having outshot the Tribe 18-4.

Ellis remains positive about the team’s status despite the lopsided record.

“The girls are still in a really good place … it’s not that they can place and go ‘Oh well we’re playing No. 3 in the country, or a team who won the National Championships last year,’” Ellis said. “They’re angry with themselves, which is a great sign because it gives us something to work on at practice this week.”

“I think a few people in conference are probably going to hopefully underestimate us and I’m fine with that,” Ellis said. “I don’t mind being the underdog coming into our first conference game. We got ranked sixth in conference for the pre-polls so I’m ready to show people that they underestimated us from pre-season right until now.”

The Tribe plays at Appalachian State and Davidson Friday and Sunday, respectively. The College will face Towson at home Oct. 3.