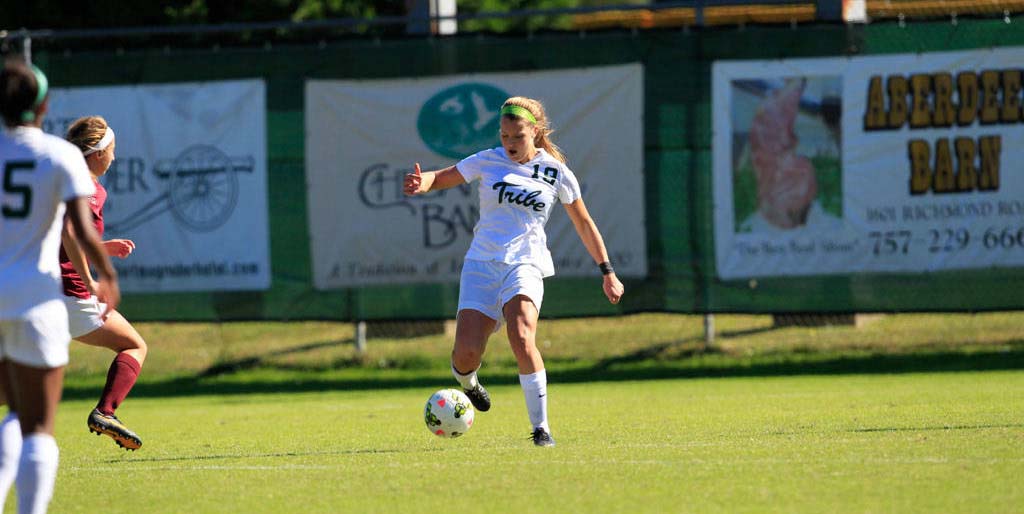 William and Mary — after a few tough weeks of shutouts and fluke goals — overcame an early deficit and stormed back against Drexel for a 2-1 victory in the first round of the CAA playoffs. On a windy Sunday afternoon at Martin Family Stadium, the Tribe (12-5, 5-4 CAA) secured a playoff victory and a semifinal date with Northeastern.

The College powered through a rough streak of dropping three games out of four — two of which were shutout losses to CAA opponents, the other an overtime 3-2 loss at home to Drexel. To make matters worse, the previously high-powered offense looked to be sputtering out right at the final stretch of the season. Backing into the playoffs, it was looking like a one-and-done for the Tribe

“It’s been difficult … especially when we lost our most dangerous and fastest forward [in junior forward] Samantha Cordum,” Daly said. “But we had an outstanding effort. … [Junior forward] Leci Irvin was outstanding today.”

For the majority of the first half, the Tribe dominated time of possession, keeping the ball entirely on the Dragons’ half. Freshman back Haley Kent, playing up in the midfield, and senior forward Emory Camper alternated in crossing the ball into the Drexel goalie box throughout the half. Although there were a number of close calls, the Tribe’s attack couldn’t quite hit home.

Then disaster struck. In the 13th minute, junior goalkeeper Caroline Casey dove sideways to bat away a shot off of a header, and the ball bounced just outside the goal box. Two Tribe defenders converged from different angles and tried to clear the ball away, but instead counteracted each other’s efforts. The ball skidded awkwardly to the side, and a Drexel attack flew in for the goal. With flashbacks to the 1-0 loss due to the fluke goal at JMU, the Tribe found itself down 1-0, much to the dismay of Tribe head coach John Daly.

“I just stood there on the sideline hoping that wouldn’t be the goal to end our season,” Daly said after the game. “It would’ve been heartbreaking.”

The deficit did not last long, however, as Irvin struck for the game-tying goal in the 41st minute. Junior midfielder Meghan Musgrove crossed in a high ball from the far sideline, as freshman forward Sammi Grasso jumped for the header. Grasso barely mistimed the jump, and instead of sending in the goal, the ball continued its lateral trajectory. But Irvin sprinted up to head the ball, securing the equalizer and tying the game 1-1. When asked what was different in the match as opposed to the Tribe’s loss against Drexel in October, Irvin didn’t hesitate.

“It was a new mentality, with a new offensive format,” Irvin said. “We wanted it today.”

In the second half, the new offensive scheme, which Irvin summarized as Camper playing farther forward as a distributor to the midfielders, really began to pay off. In the 63rd minute, senior midfielder Aly Shaughnessy broke free down the near sideline with a pass from Irvin, but her shot narrowly missed the far goalpost.

Just a minute later, Camper dusted her defender as she raced down the near sideline, rocketing a cross to a diving Baxter and nearly missing the goal. With momentum on its side, the Tribe attack was honing in, hungry for the lead.

In the 67th minute, junior midfielder Nicole Baxter, Camper, and Irvin raced down with the ball, each with a defender to beat. Baxter, on the far left, crossed the ball to Irvin in the middle. Instead of kicking it, Irvin let the ball slip through to Camper, who had a step advantage on her defender. Camper fired a clean strike past the goalie to take a 2-1 lead with her 10th goal of the season.

“When I saw the pass, I called Leci to leave it,” Camper said. “Then I got the clear shot, bottom corner off the goalie’s fingertips”

With 23 minutes to play, the Dragons fought valiantly to tie the match. But Casey had other plans. Although Casey registered five saves on the match, that number doesn’t really reflect her defensive effort. In the final eleven minutes, Casey interfered to punch away or catch crosses from Drexel five different times.

“Caroline did very well coming out for balls. … She had a terrific game” Daly said.

With the quarterfinal victory, the No. 4 seeded Tribe advances to CAA semifinals against No. 1 seeded Northeastern (12-4-3, 7-1-1 CAA) in Boston Friday at 6 p.m. This this game is crucial to the College if it is to advance to the NCAA tournament, as Daly told the Virginia Gazette that winning the CAA is likely the only route into the tournament for the Tribe.