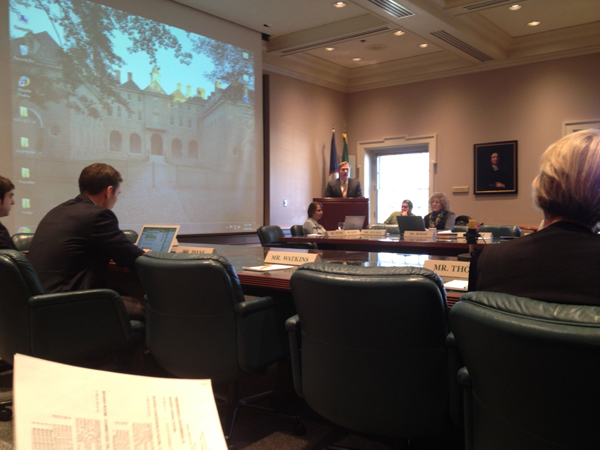 The Board of Visitor’s Committee on Student Affairs met Thursday afternoon. Vice President for Student Affairs Ginger Ambler shared an update on the College’s Task Force on Preventing Sexual Assault and Harassment.

“I wanted to give you a brief update on where we are and also to highlight that this issue continues to be in the forefront of the national dialogue both in higher [education] and in our society at large,” Ambler said.

Ambler described the task force as dedicated. It meets monthly and discusses issues in subcommittees. She went on to highlight several initiatives on campus related to sexual assault.

Last Monday, the College ended the National Sexual Misconduct Survey – developed by the National Student Conduct Officers Association – with a 31 percent response rate. The data is just beginning to be assessed, and Ambler hopes to be able to have more information about the campus climate and sexual assault by the committee’s next meeting.

Earlier this semester, the task force released its proposed changes to the College’s sexual misconduct policy for comment.

Now, it is beginning to review that feedback. Ambler also discussed two successful panel discussions on the topic of sexual assault held by the Women in Law Society and the task force, respectively.

Ambler also highlighted the Haven, a new space in the Campus Center dedicated to supporting and answering questions for students who have concerns about sexual violence. She emphasized that the Haven offers confidentiality, which makes it one of a few centers on campus to offer confidential reporting. The other two centers are the Counseling Center and the Health Center.

Ambler also mentioned HOPE’s Red Flag Campaign and the It’s On Us Campaign, launched by the White House to emphasize bystander education. Mallory Tucker ’15 and President of the Student Assembly Colin Danly ’15 have attended two meetings at the White House to discuss the campaign with other students.

“I really appreciate our students coming back and saying it’s a great idea, and that bystander intervention is important, but we need a message that suits our campus, that speaks to our community, who we are, and will send a William and Mary message that will be heard and received the way we want it to be,” Ambler said.

Ambler also shared the recently released “One Tribe, One Family” video made by Katherine Ambrose ’17 with the Board of Visitors.

Rechter explained that under the social change model, leadership is more of an action than a title.

Brew and Rechter shared several ways in which the College is applying this social change model to student leadership, including the No Title Needed initiative, Authentic Excellence initiative and SECon, a social entrepreneurship conference.

Overall, Brew and Rechter emphasized the benefits of the social change model can bestow upon students.