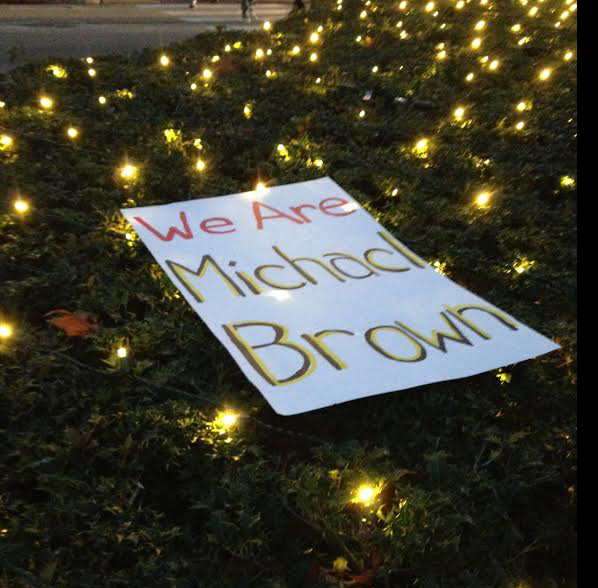 After several speakers addressed those gathered, the march began in front of the College of William and Mary bookstore, traveled down Richmond Road, passed the Sadler center and ended at the Sir Christopher Wren Building.

Travis Harris, a first year American studies Ph.D candidate, opened the protest with 4 minutes and 30 seconds of silence, in solidarity with protests around the country, to commemorate the 4 hours and 30 minutes that Michael Brown, fatally shot by an officer earlier this year, lay in the street. Harris organized the entire event with a future event in mind, tentatively planned for the spring.

“My goal is to have a candid conversation on race here in Williamsburg,” Harris said. “My hope is that by having this conversation, each side is going to understand each other better. My end goal is racial reconciliation and peace.”

The countrywide protest movement was sparked by the Nov. 24 St. Louis grand jury decision not to indict Darren Wilson, the white police officer who shot Brown, an unarmed, 18-year-old black male. The shooting occurred Aug. 9 in Ferguson, Mo., a suburb of St. Louis. The Williamsburg protest was just one of hundreds from New York to Los Angeles, and stayed peaceful, unlike some others.

“I was devastated,” Harris said of the decision in an email. “But I found hope in the diversity of the crowd. The protest was a protest in and of itself that went against all of the barriers that are up in American society. Sadly, this country has a 400 year history of violence towards Blacks. From the brutality of slavery to lynching during Jim Crow. Our contemporary problem is the shooting of Blacks while the White cop or security guard get away with it. State sanctioned violence, simply put. White college students can experience White Privilege and go on with their lives but this issue is colorblindness or a lack of awareness will lead to perpetuating the problem.  The College students of today will be leaders tomorrow.  Hopefully they will not make the same mistakes.”

In addition to Harris, multiple speakers addressed the crowd. They varied from members of the religious community, College students and NAACP members.

While the protest was peaceful, a senior from the College of William and Mary stood alone nearby with two signs reading, “Stop race baiting now,” and “Police lives matter.” A few protestors engaged the man in conversation, but the focus remained on the speakers.

Harris said that the turnout for the protest encouraged him and that it was a movement. He repeatedly highlighted the diverse array of people present which included representatives of many different age, racial and ethnic brackets. Some participants traveled far to attend the Williamsburg protest. One such protestor was Sarah Hogg, a senior from James Madison University.

“We have access to the kinds of jobs that people need to be in to change policies and create policies that will hold police and the justice system accountable” Harrington said. “We have the obligation to use our privilege to do that, especially for people who do not have access. People need to be in the streets with us to show their support — that was something beautiful that I saw in the protest that happened here. It was a huge mix of people, many of whom have never had experiences with racial profiling or police brutality and probably never will, but they stood in solidarity with us.”

“One of the reasons I did this is just because instantly with the responses I was moved,” Ladson said. “I have black brothers and a black father and cousins and I’m hurt and I’m shocked and I’m angry, and something needs to be done about it.”

Family was a driving factor for many of the protestors. One sign, held by an older white woman, read, “He was my son too.” Hampton, Va. resident Marci Williams made her stand because of her son, also present at the protest.

“I have a biracial son,” Williams said. “One day he’s going to grow up to be what the world will see as a black male and basically I want the world to stop seeing his blackness as a weapon. I’m just really interested in getting the word out that this isn’t a black problem, this isn’t a white problem; this is an everybody problem.”