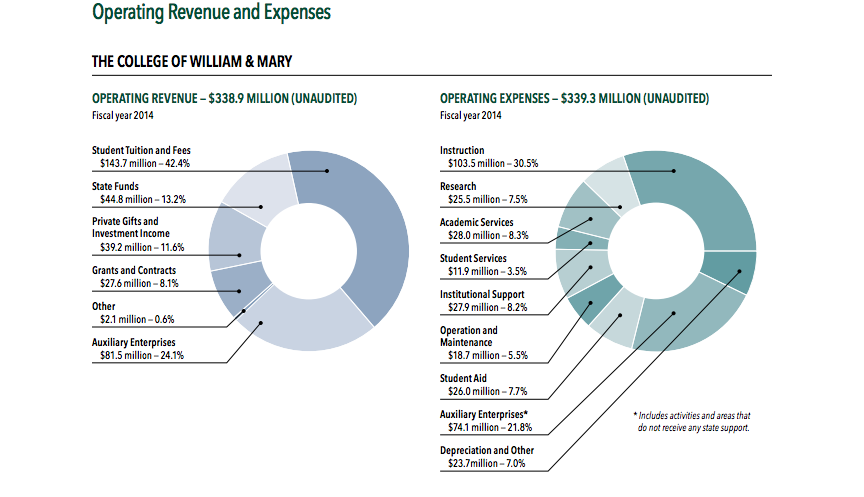 The College of William and Mary President Taylor Reveley released his report Jan. 5. The 2014 President’s Report is comprised of a message from Reveley summarizing the past year at the College, a financial update from Vice President for Finance Samuel Jones ’75, MBA ’80, and a series of highlights from the year. The report also featured two stories — one about a student, the other about a professor.

In the President’s Message, titled “Another Great Year at the Alma Mater of the Nation,” Reveley praised the College’s new general education curriculum, COLL, which will take effect for the entering class in fall 2015. The changes will affect about 25 percent of the undergraduate curriculum, he wrote.

“[COLL] will extend over four years of the undergraduate experience and provide more interdisciplinary and international work than has ever been the case before, as well as renewed emphasis on written and oral communication,” the message reads. “There will be a significant research component for all undergraduates from their freshman to their senior years.”

2014 also saw high numbers of students receiving Fulbright Awards, as well as a nearly 50 percent undergraduate participation rate in study abroad or institutionally-supported research. Additionally, nearly 100 varsity athletes graduated in the Class of 2014, giving the College the best varsity athlete graduation rate in the CAA and in the state.

While commending students, faculty, staff and alumni on their achievements, Reveley also discussed other issues, including sexual violence. He mentioned the creation of a task force headed by Vice President for Students Affair Ginger Ambler ’88 Ph.D. ’06, which is currently examining the campus’s climate with the goal of making recommendations as to how to both educate students about and prevent instances of sexual violence.

Jones analyzed the College’s financial progress in the President’s Report. Jones emphasized the success of the William and Mary Promise, a new operating model that aims to preserve affordability for Virginia students as tuition increases and state support does not.

As the economy rebounds this year, the College saw state support decrease only by 0.2 percent this fiscal year. The percentage of state funds has steadily decreased since 1980, when 42.8 percent of the College’s budget depended on federal funds.

In the President’s Message, Reveley emphasized four components for the College’s economic success: efficiency and cost reduction on campus, tuition from in-state and out-of-state students paired with significant financial aid to ensure education despite circumstance, alumni engagement, and support from the Commonwealth. Together, Reveley wrote that he believes these will provide support for the College’s continued success.

In addition, Standard and Poor’s gave the College an “AA” credit rating in July, and although it has no debt of its own, the College is working to pay off $238.6 million issued by the state for the construction and renovation of various auxiliary buildings.

In regard to fundraising success, this is the second consecutive year that the College has been able to raise $100 million. This year’s “One Tribe One Day” event marked the most money raised in a single day, during which 1,700 people donated over $150,000.

Although the financial report analyzes students’ financial support, it does not emphasize faculty and staff’s finances.

“Despite a pervasive lack of salary increases for state employees since the Great Recession hit in 2008, we have been able to make progress on compensation for our faculty and staff,” Reveley wrote the report. “For the second year in a row, we were able to provide meaningful merit-based increases.”

The report contains a series of highlights at the College, including academic, financial and state developments. In addition to further analysis of the COLL requirements and the sexual task force, the highlights include the discovery of a 300-year-old brewery, the Board of Visitors’ master plan update, the 25th anniversary of the Wendy and Emery Reves Center for International Studies and the celebration of marriage equality in Virginia.

Among the highlights was the First Young African Leaders Initiative. Leaders spent a month and a half at the College, working closely with AidData Center for Development Policy, the Institute for the Theory and Practice of International Relations and the Reves Center for International Studies. The students concluded the Initiative with a ceremony in the Wren Chapel, where Botswana’s ambassador to the U.S., Her Excellency Dr. Tebelelo Mazile Seretse, delivered the keynote address.

The first story follows Jackie Iannucci ’16 in her decision to come to the College after visiting for only an hour.

“I loved how beautiful and historical everything was, and the sense of community,” Iannucci said. “It was a gut decision that worked out perfectly.”

A native of Rhode Island, Iannucci said she finds that the College allows her to unite her many passions in one community. She is able to be both a lab manager in Associate Professor of Psychology Robert Barnet’s behavioral neuroscience research laboratory and a soccer coach while pursuing her studies.

The second featured story highlights the Frances L. and Edwin L. Cummings Associate Professor of History and Africana Studies Robert Vinson, who studies the continent of Africa and the African Diaspora at the College. According to the report, Vinson feels supported in his research at the College.

“I feel like the powers that be at the university understand the importance of the research,” Vison said. “They go beyond the lip service by helping to provide some of the resources that are needed to do that work.”