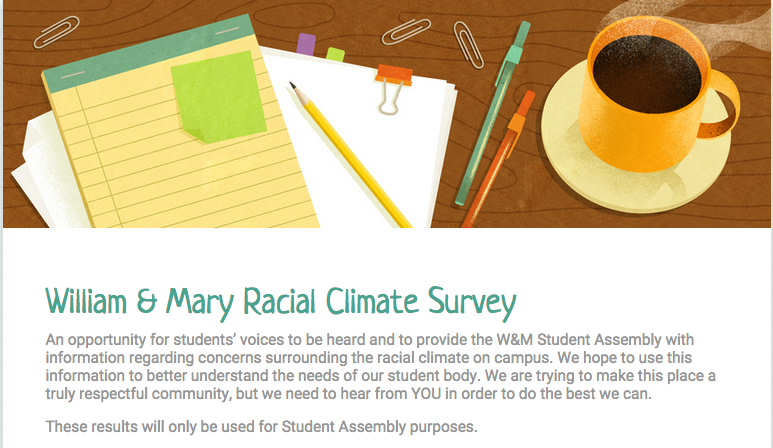 In early December, the College of William and Mary’s Student Assembly launched William and Mary Listens, a new campaign that aims to gain feedback from students about the campus climate.

Student Assembly President Colin Danly ’15 said the campaign is a reaction to some students’ feeling they weren’t always heard.

“There was a feeling that people weren’t listening and there wasn’t an outlet for people to share their beliefs in a way they were being heard,” Danly said.

Secretary for Diversity Initiatives Hannah Kohn ’15 explained that the Student Assembly’s goal with this campaign is to gain a better understanding of how students are feeling about the campus climate so the SA can provide better programming and resources to meet students’ needs.

“What we are hoping to do in the next couple of months [is] primarily to create more dialogue opportunities for students to share and listen,” Kohn said. “Listening is a really huge part of dialogue, and dialogue is really this exchange to build human relationships. And that’s what we are really hoping to focus on this semester.”

The campaign kicked off with a video, a student-wide email from Danly and a corresponding hashtag campaign, #WMListens. The hashtag offers students a channel to voice their thoughts about the campus climate.

Thus far not many students have used the hashtag, but Student Assembly Vice President Kendall Lorenzen ’15 expressed hope that as students are back on campus for spring semester, the hashtag will be utilized more and garner more student responses.

Danly linked the origin of the campaign back to the release of the Campus Religious and Spirituality Climate Survey in the spring of 2014. William and Mary Listens is a larger initiative coming out of the SA, as it is aimed to understand the campus climate more broadly.

The campaign was launched in conjunction with the William and Mary Racial Climate Survey, which gives students an opportunity to voice their feelings about the campus’s racial climate. The survey will close Feb. 1.

“We are doing [the survey] with the hope that we can share these results if people are willing and start more of a discussion on race,” Lorenzen said. “I think a lot of problems really start when we don’t create opportunities for discussion.”

Kohn said that she considers it very important to explore race at the College and maintain discussions about race on campus.

“[Race is] really relevant right now,” Kohn said. “It’s part of the national dialogue, and so I think at William and Mary it needs to be a part our own dialogue to figure out how we can grow as a campus together.”

Lorenzen emphasized the importance of discussion, which is the key goal of both the William and Mary Listens campaign and the campus racial climate survey.

“We always use the phrase ‘One Tribe, One Family,’ and it’s great, I love it, and everyone really seems to like it, but the thing that’s a little bit problematic about that is there’s a lot of different types of families,” Lorenzen said. “We need to be a part of a family that’s open and honest and has the ability to help each other grow so we can grow along side of each other. I think that we need to create opportunities to have these discussions so we can move forward.”