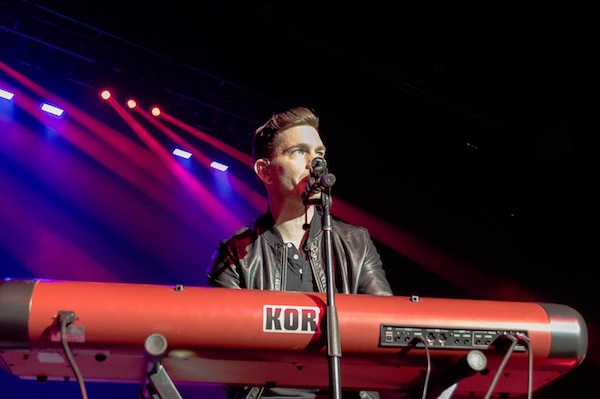 Some artists — generally of the boy band persuasion — do a strange thing in their music videos: They smile while they mouth their words. It looks cheesy, like they’d be better off kicking the act, and just flashing their pearly whites for a series of still-shots.

Andy Grammer is one of those artists. Except with him it’s different. If you’ve watched Grammer’s video for his 2011 hit single “Keep Your Head Up,” you’ve probably noticed that he’s a bad lip syncer. He smiles too much and opens his mouth wide enough to inspire some crude jokes.

After interviewing Grammer Friday night and watching him open for Ludacris Saturday, I’m not sure that he’s actually a bad lip syncer. I think that he may be the rare person who is actually and genuinely always happy, always smiling. Indeed, he smiled while he sang on Saturday; he smiled when a chorus of female voices echoed his simple love-themed lyrics; he even smiled at his own hokey jokes: “I started as a street performer, so now I like to tell people that I came from the streets.”

Grammer spent Friday in Los Angeles doing promos and radio interviews. When I sympathized with him for having to do more press, he rejected the notion that doing another interview — with a college newspaper, no less — is a chore. “I’m psyched, man; let’s do another one,” he said with the vigor of an over-enthusiastic varsity captain who relishes the opportunity to do more laps at the end of practice.

Grammer defies the trope of the moody musician; his persona is much closer to that of a happy-go-lucky jock. A sensitive jock, who really digs the type of contemporary rock — soft and stadium — that dominates the radio. Asked what he’s listening to these days, he said, “I know I’m really late on the train, but I’m really digging into the Bastille record. I just started digging into some of the new Imagine Dragons stuff — it’s pretty cool.”

Although he was born in 1983, Grammer’s influences barely predate his favorite current acts. In an interview with the Hollywood Reporter, Grammer cited three types of influence: guitar guys like Jason Mraz, John Mayer and Jack Johnson; piano influences like Coldplay, The Fray and One Republic; and hip-hop acts like Common, Lauryn Hill, Jay-Z and Kanye.

“I didn’t get super geeked into music until high school,” Grammer said.  “Like, I was sort of a jock. I was really into basketball. I was on the varsity team, and was pretty intense with it. So right around high school was when I started really digging in.”

Since then, he’s gone back to some older stuff that he would hear as a kid, mostly in the background on family car trips.

“I have since gone back and really started digging in — like, oh man, Billy Joel’s incredible, Paul Simon, a bunch of the good old stuff. But, yeah, a lot of the ones that really affected me were more recent.”

This is someone with no reservations about embracing the mainstream.

A few minutes past 8 p.m. Saturday night, the lights in Kaplan Arena dimmed. Purple spotlights illuminated Grammer’s band — a drummer, guitar player, keyboardist and a bassist who would look like Drake but for his dreads. Everyone in the band looked as happy as Grammer when they played.

Grammer skipped onto the stage as the first few notes of his 2011 hit “Fine By Me” sounded. He dressed like a greaser — his hair gelled, his chin stubbled, and a black leather jacket covering a dark Henley — but he looked like an H&M model. Every female in the auditorium screamed as if Grammer were Elvis circa 1956 or the Jonas Brothers circa 2007.

“It was the loudest I’ve ever heard for an opener,” said AMP’s Music Committee Chair Arvin Alaigh ’15.

The reaction would make any heterosexual man grin, but Grammer is married, and being fawned over by younger girls is fairly inconsequential to his always cheerful demeanor. “You look good, I will not lie / But if you ask where I’m staying tonight / I gotta be like oh baby, no baby, you got me all wrong baby / My baby’s already got all of my love,” he sings in his performance of his newest country-pop single “Honey, I’m Good.”

The only time Grammer got worked up in our conversation is when I asked him how he stays so upbeat. He explained to me that, “It’s such a lucky job, man. I get to go around to where people like the kind of music that I like and pretty much every night get to play with a bunch of friends.”

But there’s got to be more to it than that. No one I’ve ever met is as “psyched” as Grammer.

“Did you hear what I just said? You’ve got to be kidding me!”

Grammer’s most impressive performance is “Holding Out,” a reggae-tinged love song. He began the song singing and playing acoustic guitar — his guitar strap is black with white lightning bolts. He proceeds to play the cymbals and the trumpet.

My guess is that Grammer works this shtick into all of his shows. He plays the three instruments — four if you include singing — in a single song, effortlessly, like he had done it a million times before. And yet, he was still grinning. He seems like the type of guy who could play Go Fish over and over without getting bored.

“My favorite show is when I show up and everyone is psyched and ready to go. I don’t care where in the world that is, if that’s the situation then it’s great.”

“Ugh. Isn’t this guy the worst?” I said to the two girls standing behind me. They had told me earlier that they had come for Ludacris. When Grammer began they were scowling.

“I think he’s pretty good,” one of them said. The other agreed.

They’re right. Grammer is a good performer, maybe really good. Students filed into Kaplan throughout his performance, but that didn’t matter to Grammer. The previous night he told me, “When it’s four people and you’re really connecting to them, it’s the same as when it’s 2000.” He wasn’t being facetious. Grammer and his band of exceedingly good guys could energize any room.

They were even a hit backstage. Grammer posed for selfies, recorded a rapchat, and jammed with a few lucky fans.

“It was like my 11th or 12th concert and I think he’s like the nicest guy I’ve ever worked with,” Alaigh said. “His whole band was so nice when we were helping them set up with their sound check and everything. These guys, like, remembered our names, were cracking jokes the whole time, telling stories — it was just phenomenal.”

If Grammer’s got some big secret behind his personal pumpkin-spiced flavor of bubbly kindness, I’ll probably never discover what it is. I think that maybe he’s just genuinely content with his amazing life.

“I just generally have a take on life that everything makes you stronger. Even if you’re happy. You just kind of grow from everything.” Grammer said. “Right now my life is incredible. I really don’t have a reason to be upset, ever.”

Grammer’s attitude, his American Idol-finalist persona, his upbeat music — it’s all a little nauseating. But it’s also a little bit inspiring. I don’t know what to think — about Grammer, about life, about anything. I almost forgot that it was a Ludacris show.