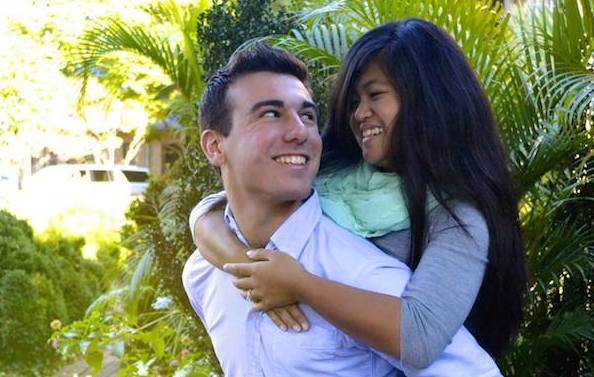 Although Yates Hall is the butt of most orientation and dorm jokes, Catherine Acio ’16 and Eddie Lichter ’16 were brought together by the air-conditioned brick fortress.

“A couple [of] friends from my high school lived in Yates, so I often went over to meet them, and she was there,” Lichter said.

Both from Northern Virginia, they each had ties to Thomas Jefferson High School, a fact which brought them together as friends and ultimately into a committed relationship.

Acio and Lichter have been together for 16 months. They got engaged in the Sir Christopher Wren Building Chapel on Oct. 10, their one-year anniversary. Lichter explained that he “had to book [the Wren Chapel] a month ahead of time” to execute his ideal proposal, which he planned as a surprise.

“Getting the people to help was hard because I didn’t want to tell them what it was for … I was afraid word would get around to her,” Lichter said.

“I had my hunches, knowing [Eddie] would probably do this or that. But he would just say, ‘I don’t know!’ He knew my tricks and shot them down,” Acio said.

Getting married at an early age is a bold choice for many, but Acio and Lichter emphasize the fun in being able to share the big moments in life together, such as starting a career.

The couple has already decided on an outdoor venue in Charlottesville and will be married in June 2016.

“It’s an experience to grow together. It’s going to be a challenge figuring out careers and stuff, but being able to do it together and [have] a support system while you do it is special. You have an opportunity that not many people get,” Acio said.

Acio admitted that she initially struggled with the decision to get married because of what others may think or how she might be judged. However, she says she ultimately realized, “When you’re in love with someone, it doesn’t actually matter.”

Part of the success of their relationship may be attributed to the couple’s complementary personalities. Acio and Lichter share a lot of the same interests, ranging from music taste to the original “Star Trek” series. Acio describes herself as “very type A,” but Lichter is “calming and brings [her] back to Earth.”

Neither Lichter nor Acio view marriage as something that will change their lives. Because they frequently spend time together and are already very open with one another, they both see marriage instead as a way of “putting [their commitment] in stone.”

The couple has already decided on an outdoor venue in Charlottesville and will be married in June 2016. In ten years, Lichter and Acio hope to be doctors — although in different fields — and live in California with a child or two.

They haven’t thought about their first dance yet, but the orchestral version of “Marry Me” by Train is in the running, as it was the song playing during Lichter’s Wren Chapel proposal.

“Marriage is about love, and if you reduce it down to what people think or how much money you have, it strips the meaning of what [it] really means,” Acio said.