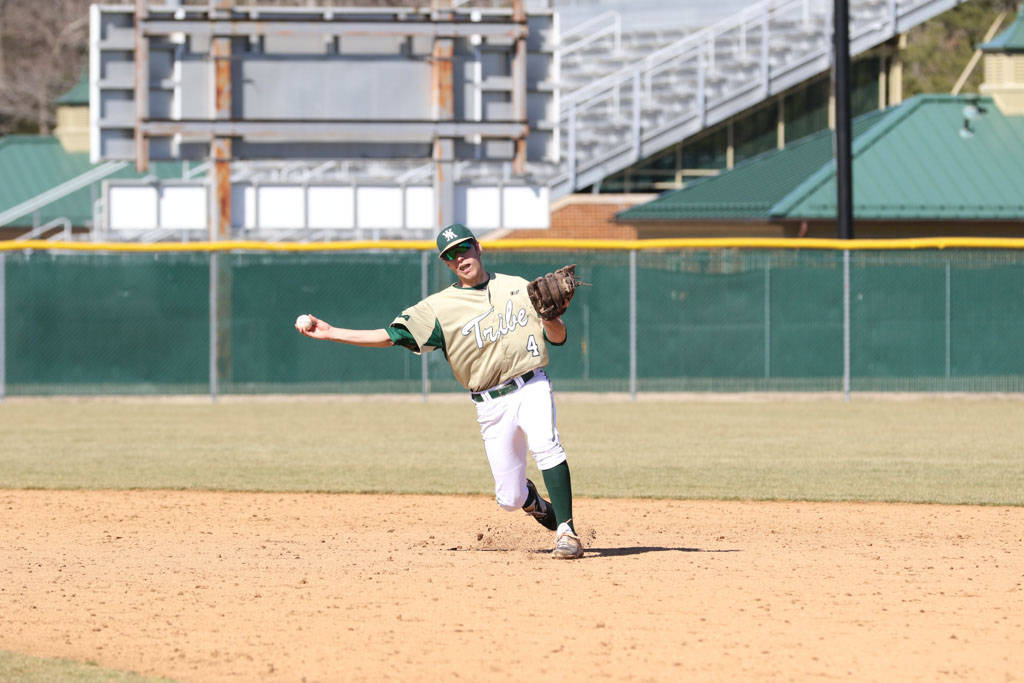 William and Mary opened its Colonial Athletic Association schedule with a bang over the weekend, taking two of three on the road against Hofstra at Mitchel Field in Uniondale, NY, including a 21-12 slugfest Sunday afternoon.

The Tribe (10-5, 2-1 CAA) took an early lead in the first leg of the doubleheader Friday afternoon, scoring two runs in the top of the second inning via a sacrifice fly from junior center-fielder Josh Smith and freshman second baseman Cullen Large’s subsequent RBI single. However the Pride (3-8, 1-2 CAA) responded immediately, scoring three unearned runs in the bottom half of the inning off of junior starting pitcher Jason Inghram.

After the Pride tacked on another run in the fourth off an Inghram wild pitch, the College countered with a scoring-run of their own in the top of the fifth. Smith doubled to start the inning, eventually scoring on senior third baseman Willie Shaw’s groundout after advancing to third on a sacrifice fly. Hofstra’s Brett Johnson responded with a solo home run in the latter half of the inning, increasing their lead to 5-3.

The Tribe bats came alive in the second game of the doubleheader. Smith got the scoring started in the top of the first with an RBI double to drive in Large, crossing the plate himself later in the inning on a single by junior first baseman Charley Gould.

The College continued the offensive onslaught in the third inning. Freshman outfielder Zack Newell scored on an error, Large crossed home plate on a double play, and Shaw drove in Smith with a double, extending the Tribe lead to 5-0. The lead grew to nine in the fourth inning, with Newell, Large, Smith, and junior catcher Ryan Hissey all driving in a run apiece.

Hofstra scratched a run across in the bottom of the fourth, but that’s all the Pride could muster as the College cruised to an 11-1 victory. Sophomore Nick Brown pitched six quality innings for his third win of the season, allowing one run on two hits while striking out three. Freshman Michael Toner earned the save with three shutout innings to close out the ballgame.

Rain postponed the third game of the series to Sunday, but both teams made up for the delay with an offensive explosion. The College got the scoring started in the top of the first with a Shaw double driving in two runs. The Pride followed with a run in the bottom half of the inning, as Johnson’s fielder’s choice scored Dalton Rouleau.

The floodgates opened in the second inning. The Tribe plated four runs, three of which came across on a Gould home run. Hofstra responded with four runs of their own, as Mat Annunziata smacked a two run double, and Johnson followed with a two-run bomb to cut the Tribe lead to 6-5.

The Tribe scored five more runs in the third, including a Hissey three-run long ball, and didn’t stop scoring, finishing the game with 21 runs on 20 hits. Every Tribe starter recorded at least one hit, and six finished with at least two runs batted in. Hofstra’s 14 hits produced 12 runs, nine of which were driven in by Annunziata and Johnson.

Freshman Charlie Fletcher earned the win for the College, pitching 2.1 innings in relief, allowing one earned run on three hits and two walks. Starter Alec Eisenberg took the loss for the Pride, giving up six runs in an inning and two-thirds.

Tribe baseball returns to Plumeri Park Wednesday, March 18, for a matchup with Connecticut. The game is scheduled to begin at 7 p.m.