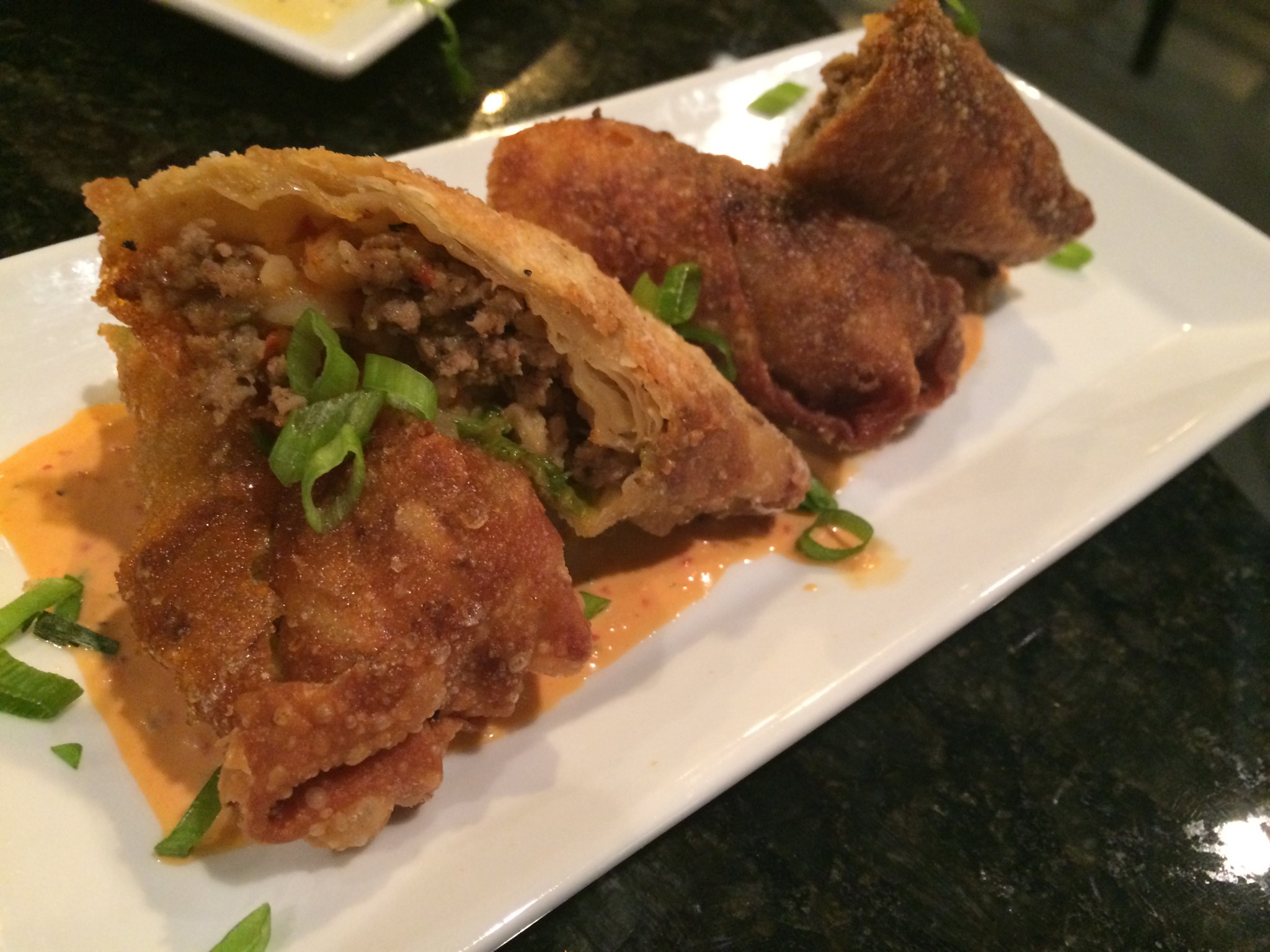 Nothing says cocktail hour and hors d’oeuvres quite like the silhouette of a martini glass cradling a solitary olive. The image evokes the suavity of grand parties seen in black and white films starring Katherine Hepburn, but the simplicity of the triangle on a stem resonates with modern edginess. Such is the black, white and red sign above the door to the Triangle, a small plates restaurant, bar and music lounge on Prince George Street.

Entering the establishment is like stepping into a motif of fun nouveau, something familiar infused with a riff of liveliness. Dark floors and walls stand in contrast to long curtains as crimson as Chanel’s “Pirate” lipstick. A well-stocked bar sits along the back wall facing a bandstand platform surrounded by glossy and smooth, wooden planks for dancing. A sea of plushy booths and big tables to accommodate large parties separates the two.

The entire space craves the tinkling of ice in glasses, the chirp of multiple conversations, the click of pumps against the dance floor, and the late-night energy of unbridled enthusiasm. The menu parallels the concept encouraged by the design of the space.

The entire space craves the tinkling of ice in glasses, the chirp of multiple conversations, the click of pumps against the dance floor, and the late-night energy of unbridled enthusiasm.

A long cream-colored stiff paper denotes almost two dozen options for small plates. Each dish would be at home in your mother’s kitchen, but it would feel a little overdressed, more sophisticated than the average fare. Ordering a smattering of menu options facilitates conversation as groups discuss what to share. Conversation sparks again sporadically as each dish makes its way to the table. The affair revolves around trying one thing, then another, and deciding to order additional plates to compare. Meanwhile a live musician with bright red hair played in the background as my companion and I began to taste forkfuls of pasta coated with creamy sauce.

Macaroni and cheese carries high expectations and bubbles with gooey nostalgia from childhood memories. The white cheddar sauce clings to the curls and ridges of the cavatappi pasta, but the recipe lacks much of the unctuous texture that additional cheese would create as the satisfying strings of melted cheddar intertwine with the fork tines.

A refreshingly acidic arugula, fennel, radish and orange salad cleanses our palates between the carb-rich pasta and fried eggrolls. The eggrolls, cut to resemble the restaurant’s namesake, won my vote for favorite dish of the night. Four little wedges waded in a shallow pool of what the menu termed “Baja sauce,” a balanced spicy and velvety take on a traditional red pepper romesco. Each packet contains house-made chorizo sausage and shrimp. The piquant chorizo almost overwhelms the delicate flavor of the shrimp, but biting into a cream-dipped brittle pastry with a meaty interior fulfills an important textural requirement.

Next we turned our palates to Mahi-Mahi fish tacos. A stripe of roasted red pepper ornamented bright green cabbage atop the pieces of fish. Wedges of lime adorned the square plate, and the dish benefited from the stimulation of the citrus juice for an extra layer of flavor. The fish itself had a tender, flaky texture and did not fall willy-nilly from the taco during the journey from plate to mouth.

Thus, to a reasonable tune of about $30.00 for the four dishes, we enjoyed an evening of delightfully portioned samples, civilized music and nimble conversation stemming from our surroundings. Despite a few minor snafus — our interactions with the hostess were brusque and awkward — I would return for a casual meal with a large group eager to try dishes on the cusp of their comfort zone. New restaurants tend to experience a phase of uncertainty before they find their pace, before wait-staff and kitchen function effectively and before designers have added enough downy surfaces to balance acoustics. The Triangle’s atmosphere, menu and bar appear well-placed in a college town, and it has potential to become an establishment for an unflagging late-night crowd.