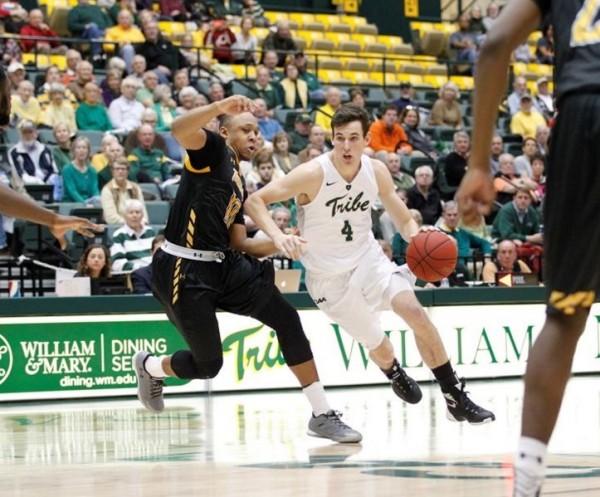 William and Mary (9-4,1-1 Colonial Athletic Association) opened its CAA division play and rang in the new year in a disappointing fashion Dec  31.

Coach Shaver stressed the importance of toughness to his team, likening the rest of the season to a war.

“We got out-toughed by Townson” Shaver told Tribe Athletics.

Judging by the Tribe’s performance in their next game vs. Charleston( 9-4, 1-1 CAA), his emphasis on a new mentality  paid huge dividends.

Coming into the bout with Charleston, rising star Omar Prewitt referred to the game as a must-win. The team responded by unleashing one of their most dominant first half performances of the season. The Tribe caught fire in the opening twenty minutes from beyond the arc, shooting a scorching 54 percent from the three point line. The College’s touch from behind the arc also transferred to the field  as they tallied 60 percent from the field.  The dominant half gave the Tribe a 19 point cushion that they would never relinquish.

Omar is capable of playing like this every game.He just needs to learn to do it consistently.

For the entirety of the game, junior forward Omar Prewitt let his actions speak louder than his words. He was unafraid to take it to the basket against defenders, and was rewarded with fifteen attempts at the charity stripe. Prewitt converted 10 of his 15 attempts from the stripe along with a fantastic field goal percentage from the field.  While the everyday observer may not have expected this from Prewitt, Shaver was unsurprised.

“{Omar} is capable of playing like this every game.” Shaver said to Tribe Athletics “He just needs to learn to do it consistently.”

While William and Mary was in firm control in the first half, the second half was dicey. In the opening moments of the second, the Tribe got their lead up to a game-high 22 points. The Cougars were resilient, however, and managed to pull off a 9-2 run of their own cutting into the Tribe’s cushion. All nine of Charleston’s points during the run came from Maquise Pointer and Evan Bailey.Once again, the physical play of the Tribe paid off, as Prewitt used four trips to the foul line to end Charleston’s run and put the game out of their reach for good.

The win bumps the College up to 9-4 for the season and 1-1 in CAA play and knocked Charleston down to an identical record . Up next, the Tribe faces Drexel in Philadelphia Jan. 7, tip off at 7 p.m.