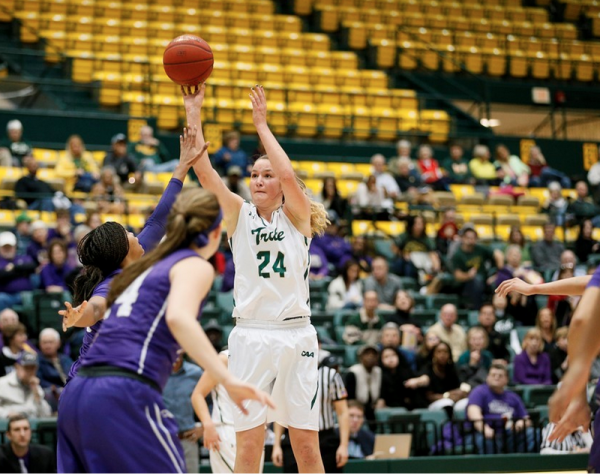 In the midst of a three-game slide in the Colonial Athletic Association after starting the season 11-2, William and Mary was provided with a rare opportunity to break the losing streak and regain control of the season in a favorable home matchup against CAA bottom-dweller North Carolina — Wilmington Jan. 22. The College took the victory 77-65 at Kaplan Arena.

“It was like the Super Bowl for me,” head coach Ed Swanson said. “You [‘ve got to] win your home games to have a chance in this conference, [it was] a must-win early in this season.”

Despite trailing for all but five minutes of game-time, the Seahawks put up a strong fight against the Tribe, particularly off the boards where UNCW won the rebound battle 40-34, including an 18-7 advantage in offensive rebounds.

Though the Seahawks had an abundance of second-chance opportunities and consequently managed an 82-69 advantage in number of shots, UNCW consistently failed to finish shots, with just a 32 percent shooting conversion. Sophomore center Abby Rendle played a huge role in that statistic. While the incoming snowstorm paralyzed traffic in Williamsburg, Rendle shut down the Seahawks offense inside of Kaplan to the tune of 10 blocks, five times the number of blocks by the entire UNCW team.

Rendle’s defensive success in the paint propelled her to a historical performance, as the sophomore registered the first triple-double in the history of the Tribe women’s program with a superb stat-line of 24 points, 15 rebounds, and a suffocating 10 blocks.

“Over the past couple of games, our team chemistry has really improved, which helps me a lot in the post,” Rendle said. “The outside players have been able to get the ball inside to me more, and I [shoot] or I pass it out so that team chemistry plays a part in [the triple double].”

Swanson, though pleased with Rendle’s performance, had a slightly different take on the stat-line.

“I wish Abby wouldn’t have as many blocks, because I feel she’s blocking players who are going by our guards,” Swanson said. “She’s blocking for shots, which takes her out of position to rebound. We have to a better job guarding on the perimeter so Abby doesn’t have to block.”

I wish Abby wouldn’t have as many blocks, because I feel she’s blocking players who are going by our guards

The College defense put up 16 blocks on the game overall, a usual area of dominance for the team as William and Mary is the top-ranked blocking team in the conference. However, the Tribe’s usual success in creating turnovers while limiting their own, as it still holds the No. 1 rank for turnover margin in the conference, was not part of the storyline Friday night. Both UNCW and the College posted 15 turnovers.

As a result, the Tribe never distanced itself from UNCW, and the pattern of the game began to emerge with hardly any runs.

UNCW’s only lead at 6-2 disappeared midway through the first quarter, as the Tribe shot 50 percent both from the field and from the arc for the first half of play. The opening 10 minutes ended with a 22-14 advantage for the Tribe. Fueled by 11 points off turnovers, the College notched the highest scoring quarter for either team.

The second quarter started to get interesting as UNCW cut the Tribe lead down to 25-22. However, the College offense had other ideas, regaining the lead 38-28 behind the efforts of freshman guard Bianca Boggs. Boggs finished her night nearly perfectly, notching 16 points via a perfect 3 of 3 from the arc and 5 of 5 from the field. Only a free throw blemished her shooting percentage.When asked how she was able to shoot so well against the Seahawks, Boggs credited her teammates.

“I think it was to keep my confidence up.” Boggs said. “Especially after not shooting well in the last couple of games, [I] just kept shooting the opportunities I was given, especially the skips, and [I tried] to be ready.”

The Tribe concluded the first half with a 41-33 lead.

Although UNCW narrowed the gap to just three points early in the third quarter, the College stayed ahead the rest of the night. When Boggs fouled out, Swanson was forced to put in two point guards at the same time. Sophomore guard Jenna Green is usually not on the court at the same time as junior guard Latrice Hunter.

Poor shooting by the Seahawks combined with solid late free throw efforts by the Tribe put the game away in the fourth quarter. The College went on to win 77-65. The Tribe is now 6-0 in games where the team has hit 70 or more points.

Up next for the Tribe is a CAA road matchup against Delaware on Jan. 26, postponed from the weekend due to Winter Storm Jonas. Delaware is currently the No. 4 team in the conference. Tipoff in Newark, Del. is set for 7 p.m.