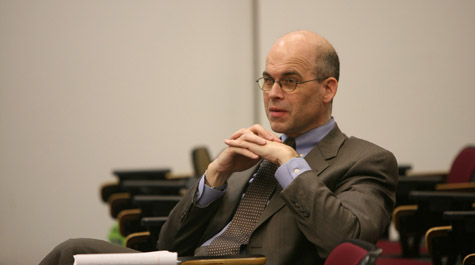 The Board of Visitors Committee on Academic Affairs discussed potential legislation regarding credit given for Advanced Placement scores, admissions procedures and faculty matters during its meeting Thursday, Feb. 4.

“No other institution — public, private or indifferent — has won as many of these awards as we have,” Halleran said.

Other faculty matters discussed included the board’s extension of benefits such as disability and maternity leave to non-tenure eligible faculty and the expansion of the faculty handbook to become more compliant with Title IX.

“I think we will have not only a Title IX compliant policy, but a better policy,” Halleran said. “The existing practice, even putting Title IX aside, is a clunky process.”

Faculty Liaison Committee Chair Liz Barnes said the proposed amendments to the faculty handbook will likely take effect in March, once they are passed by the Faculty Assembly.

Halleran said that the changes will not only make the handbook compliant with Title IX, but will also improve policy overall.

“I think we will have not only a Title IX compliant policy, but a better policy,” Halleran said. “The existing practice, even putting Title IX aside, is a clunky process.”

Barnes also mentioned that the board was also looking into making faculty and students more aware of the mental health services available on campus.

“We felt that we didn’t really know; we faculty aren’t aware of all of the different resources and maybe the students aren’t either,” Barnes said.

Much of the committee’s meeting focused on legislation being considered in various states that would require state institutions to follow a set standard for giving credit based on Advanced Placement or International Baccalaureate test scores.

“No matter how marginal or how weak the application, at least two individuals read the whole darn thing,” Halleran said.

According to Halleran, this type of legislation originated in Florida, and some forms require students who get a score of three or above on AP exams to receive college credit wherever they go to school. Halleran said that this legislation is being actively advocated for by the College Board and would require the College to lower its standards.

“Our legislature is not nearly as Draconian or ill-informed, but they want us to make our requirements easier,” Halleran said. “I think it’s a case of legislators solving a non-problem.”

The discussion of giving academic credit for AP and IB exam scores prompted the Board to discuss admissions policies.

In addition to the requirement for a rigorous course load that comes with the College’s high standards for giving AP credit, the Board discussed the holistic requirements for being admitted.

Halleran said that an important aspect of admissions at the College is the fact that every application receives careful consideration.

“No matter how marginal or how weak the application, at least two individuals read the whole darn thing,” Halleran said.

Barnes brought up a concern from the faculty that faculty members whose children apply to and are rejected from the College suffer from major morale issues.

Associate Provost for Enrollment and Dean of Admission Tim Wolfe said that in addition to the concrete admission requirements, the College also takes into account the love of learning a student demonstrates, as well as any connections they may have to the College.

The committee moved into a closed session for the remainder of their meeting in order to discuss personnel matters.