Home Student Life Dining What is this, a soda machine for ants? 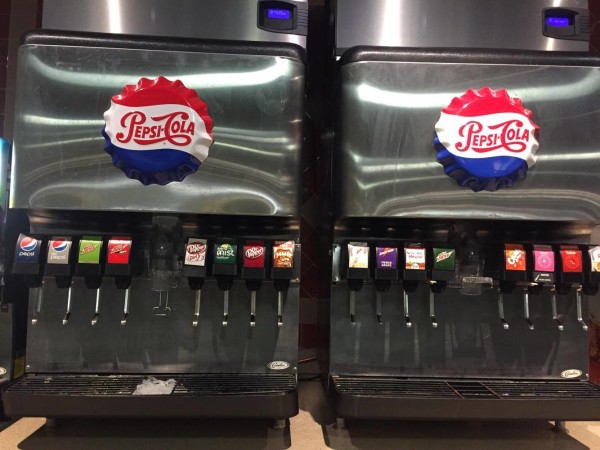 Feb. 19, the soda machine nearest the dish return at the Commons had an “Out of Order” sign attached to its side. For Emily Williams ’18, the machine seemed to work just fine. That is, until she discovered about six ants swimming in her orange soda.

“I drank and then noticed. I was grossed out,” Williams said. “I knew I should probably say something.”

That same afternoon, she created a post on the Facebook page “Overheard at William and Mary” warning students to be wary of the machine infested with ants.

Williams said she did not notice the “Out of Order” sign because it was located on the machine’s side. However, despite the sign, the machine was still turned on and functioning.

Ant infestations are an occasional occurrence in kitchens and dining facilities everywhere, and Williams works at Cosi, which she said had a similar problem with ants in the past. In addition to the area in which sandwiches are prepared, Cosi features a soda fountain near the tables in Lodge 1. She said that the ants in Cosi were drawn from the kitchen area to the soda machine.

According to Williams, Cosi shut down its soda machine for three days so the staff members could clean it thoroughly. She said a similar cleaning process will be needed to control the ant population at the Commons.

“People think ants are attracted to food first. They’re attracted to water first,” Williams said. “To me, the ant problem looked to be far enough along that the machine should’ve been shut down.”

Williams was not the only student who encountered the ants at the same soda machine. Last week, Tina Chang ’16 had already consumed some of her carbonated water before noticing there were ants in it. Chang also did not see the “Out of Order” sign placed on the machine’s side.

Dining services workers are aware of the ant problem and are taking measures to contain it. While the infested soda machine previously had one sign on its side, it now has two more signs on its front. The spouts have been partially dismantled for cleaning. According to a Sodexo employee who asked to remain anonymous in order to discuss company policy, the machines are cleaned every night and spot-cleaned throughout the day.

“Being a place of food service we always have to battle nature and are successful daily. But every once in a blue moon, something gets through our cleaning methods,” the worker said in an email. “But be assured, we are doing everything in our power and more to correct the problem, we just ask for a little time. Ants can’t be flushed out in one day.”

Resident District Manager Jeff McClure said that throughout the day the machines are cleaned four times and are checked constantly, especially during this time of infestation. He also said that the affected machine has been taken apart and the insides have been cleaned.

“[The ants] are an issue throughout the entire area and are drawn because of the weather,” McClure said. “This is a large issue.”

This past weekend, the machine was rendered out of use so dining services workers could clean it thoroughly. Despite her experience with the ants, Chang said she will continue to use the machine after it has been cleaned.

“I’ll revisit the machine, but I’m going to check my drink,” Chang said.

As of this past weekend, the affected soda machine remains dismantled. According to McClure, PepsiCo itself had to repair portions of the machine.