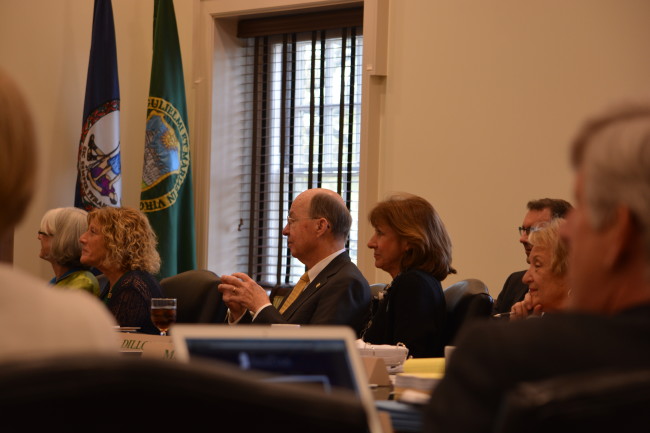 When a group of students representing 16(IX)3 arrived at the Board of Visitor’s Audit and Compliance committee meeting Thursday morning, they learned there would not be enough room for them all to sit in the  meeting. Following the committee meeting, a group of the organization’s representatives spoke with Rector of the Board Todd Stottlemyer ’85.

16(IX)3, an organization founded in response to the ongoing Title IX investigations at the College of William and Mary, has been drafting a petition over the course of this academic year. This petition includes recommendations to change the ways the College handles sexual assault prevention, education and policy.

The petition urges administration to endorse and use the Callisto reporting tool which saves time-stamped reports of assault and reports them directly to a Title IX coordinator, improve sexual violence education during freshman orientation and beyond, develop a highly-trained case determination panel, define and codify relevant vocabulary, extend sanctions beyond graduation, reinstate a peer advisory program to help students through the reporting process and send notifications to the campus community when a sexual assault occurs on or off campus.

The group launched the petition March 19, and has been gathering signatures from community members in preparation of the Board of Visitors meeting. According to 16(IX)3 co-founder Francesca Maestas ’17, it was hurtful being turned away because all of the organization’s members were very passionate about attending the committee meeting.

“We felt that the biggest thing was that we all woke up really early and organized this as a group because we were told even by administrators that this was public,” Maestas said. “We all have a vested interest, we were all passionate and wanted to sit in and silently listen to what they were going to say. Those of us who ended up outside had this feeling that if we weren’t allowed to go into a public meeting, then it obviously wasn’t a public meeting.”

When members of the group were asked to wait outside, they went to College President Taylor Reveley’s office to speak with some of his staff members. Upon arriving, they were put in contact with Assistant to the President and Secretary to the Board of Visitors Michael Fox who scheduled a meeting with Stottlemyer and member of the board Lynn Dillon ’75.

At the time of this meeting, Stottlemyer and other board members had not yet read through the petition, but spoke about the general requests the group was making.

“I met with four students, listened to them and they gave us information,” Stottlemyer said. “They had a number of recommendations related to campus climate specifically on sexual violence, both on prevention and process recommendations, to provide clarity and recommend changes. We talked about that and got a chance to listen to them have them walk through and highlight some of the things they were proposing.”

I met with four students, listened to them and they gave us information,” Stottlemyer said.

Stottlemyer said that he would make sure to engage with administrators regarding these issues, and told the group that the board would follow up with them about their recommendations.

Following this recommendation, 16(IX)3 co-founders Maestas and Abbey Childs ’17 sent the board an electronic copy of their proposal with a letter attached. In this letter, they emphasized the relevance and importance of their petition.

“We continuously devote ourselves to the improvement and discussion of policies and programs, important as they are, but we must not forget that during this time, individuals in our community are being severely affected by the impact of sexual assault,” Maestas and Childs said in the letter. “For this reason, we would like to express the necessity of making this issue a top priority at our school. We hope that you will consider our proposal in your discussions in the interest of strengthening our community values of trust and respect.”

We continuously devote ourselves to the improvement and discussion of policies and programs, important as they are, but we must not forget that during this time, individuals in our community are being severely affected by the impact of sexual assault,” Maestas and Childs said in the letter.

Also at the meeting, Chief Compliance Officer Kiersten Boyce updated members of the board with this academic year’s Title IX statistics. This year, there were 53 reports by students, faculty and staff, although this number could reflect double counting. Out of these reports, 15 administrative investigations were started, and 13 were concluded. Seven investigations found that at least one policy had been violated, and the decisions of the other six investigations were appealed.