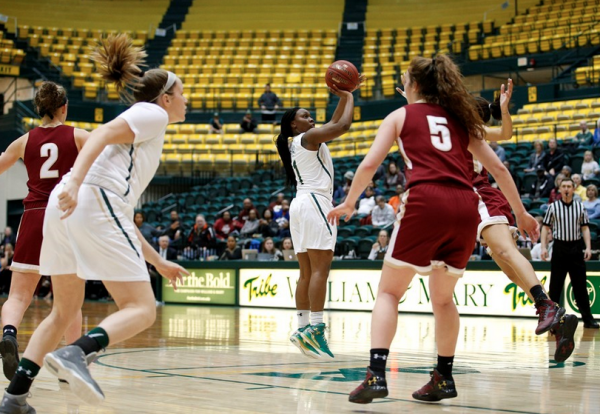 As the last few seconds ran off the clock on senior night at Kaplan Arena Friday, all four William and Mary seniors were on the floor. Guards Latrice Hunter and Marlena Tremba and forwards Kasey Curtis and Alex Masaquel led the way in a back-and-forth, run-filled game, capturing a 58-52 victory over UNC-Wilmington in the second to last Colonial Athletic Association matchup at home.

The win was hard-fought for the Tribe (18-10, 8-9 CAA). Neither team shot the ball or executed well on offense, with the Tribe shooting 40.0 percent and the Seahawks (10-18, 5-12 CAA) shooting 38.6 percent. The College hit well-timed shots and got stops when they needed them, resulting in a Tribe lead for almost the entire second half.

“The second half, we really played lockdown defense,” head coach Ed Swanson said. “Our defense was really fantastic … our team really came out with energy and fought hard.”

The Tribe started the contest strong, scoring the first 13 points of the game. Masaquel and Hunter combined for 11 in the stretch, while the Seahawks turned the ball over four times. Despite the large number of turnovers, UNC-Wilmington controlled the back end of the first quarter, cutting the Tribe lead to just 18-17 at the break.

The Seahawks continued to dominate the pace of the game well into the second quarter, as a 32-7 run in the span of just over 10 minutes of game time put UNC-Wilmington up by 12. The Tribe fired back with two consecutive threes by Hunter and Tremba, followed by a bucket in the paint to close the gap considerably. The College entered halftime down 34-33, a one-point lead for the Seahawks.

“We always say we want the first run, the last run and the longest run,” Swanson said.

“We always say we want the first run, the last run and the longest run,” Swanson said.

The second half started similarly to the first half. The Tribe initiated a 10-2 run to start the third quarter. That push, started by a Curtis layup, gave the Tribe a lead that they held onto for the duration of the game. The Seahawks cut the lead to one with a jumper by guard Jasmine Steele, but the Tribe held a 45-42 lead at the end of the quarter, thanks to a layup by sophomore guard Bianca Boggs.

The pace of the game slowed considerably in the fourth quarter for both teams. UNC-Wilmington cut the College lead to one on three separate occasions but could never tie the game or steal the lead. Clutch buckets by Masaquel and junior guard Jenna Green, the latter a three-pointer from the corner with the shot clock winding down to push the Tribe lead back up to four, ensured a victory for the College.

Hunter had one of the best games of her career on senior day, shooting five of eight three-point attempts and scoring 17 points. Masaquel added 14 points, while Green contributed nine, seven of which were in the fourth quarter. On defense, the Tribe held UNC-Wilmington’s leading scorer of the season, guard Madison Raque, to only seven points.

The Tribe outscored the Seahawks 30-24 in the paint, while shutting UNC-Wilmington out in fast break points 12-0. The Seahawk bench contributed much more than the College’s, scoring 27 points compared to seven.

Masaquel and junior center Abby Rendle led the Tribe defense with two blocks each. Hunter, Tremba and Green each contributed two steals. Green also led with five assists, trailed by Masaquel with four and Hunter and Tremba each with three, accounting for all 15 assists of the match.

The Tribe travelled to Harrisonburg Sunday to take on James Madison in the penultimate game of the regular season. They will finish off the campaign with a home make-up game Mar. 1 at 7 p.m. This matchup against Drexel will be the final CAA game before the CAA Championship in Harrisonburg Mar. 8 through 11.