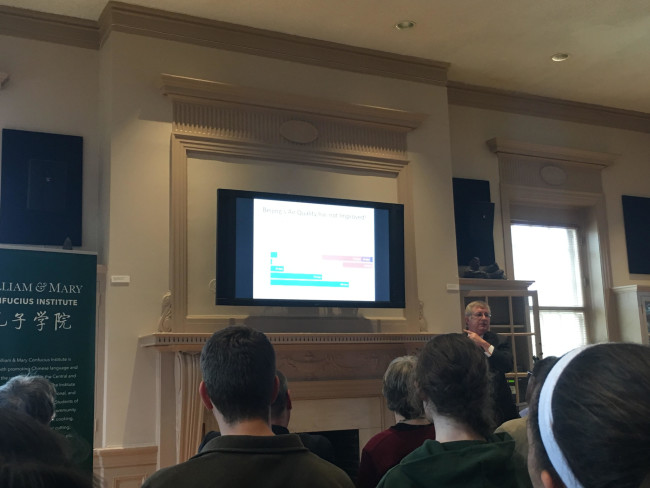 The College of William and Mary Confucius Institute hosted a lecture on the role the Chinese government plays in the Chinese economy. Professor Barry Naughton gave the talk.

Director of the William and Mary Confucius Institute and Provost for International Affairs Steve Hanson introduced Naughton as a distinguished Chinese economy scholar.

“Barry Naughton is the Sokwanlok Chair of Chinese International Affairs at the School of Global Policy and Strategy at UC San Diego,” Hanson said. “He is one of the world’s most highly respected economic economists working on China. An authority on the Chinese economy with an emphasis on issues related to industry, trade, finance and China’s transition to a market economy. His recent research focuses on regional economic growth in China and its relationship to foreign trade and investment.”

Naughton began his lecture by defining China’s version of socialism, on which Deng Xiaoping, the paramount leader of the People’s Republic of China from 1978 until 1989.

“Deng Xiaoping said we’re going to take the idea of socialism and just narrow it into economic development,” Naughton said. “So, it’s interesting to me that we face a situation where the Chinese government has been consistently promoting an idea of socialism and yet the content, the meaning of that motion, has changed dramatically. … The ideal of socialism may or may not be real, but it has an important place in the constitution of Chinese society. It represents a set of common objectives that everyone should pay at least good service.”

Throughout his lecture, Naughton proposed four criteria he determined were essential to deciding whether China is socialist.

“It seems to me that we could legitimately advance four criteria to examine the nature of the Chinese economy as it’s evolved,” Naughton said. “To me the striking thing is going to be that in each of these criteria we see very, very striking changes over the past forty years.”

Naughton determined that the first of the four criteria is capacity, which can only occur when a government controls a sufficient amount of the economy’s resources.

“How much capacity does the government bring in terms of its ability to shape economic outcomes?” Naughton said.
China faced fiscal reforms starting in the 1990s, which led to the firing of approximately 50 percent of worker in state-owned institutions and the laying-off of almost 80 percent of workers in the “urban collective.”

Naughton said one of the major indicators of the Chinese government’s capacity to shape economic outcomes, especially after the major fiscal reforms, was its entry into the World Trade Organization.

“It’s not just a question of the government, it’s a question of the Chinese economy as a whole,” Naughton said. “Right after 2001, China goes into the World Trade Organization. … As the reforms start to sink in, the economy reaccelerates and in the first decade of this century Chinese economy actually grows faster than it happened 20 years. It grows 10.5 percent instead of 9.8 percent. … After taking care of these initial problems, they unlocked this additional source of productivity growth.”

Naughton determined the second criterion as intention. He defined it as the government’s intention to shape economic outcomes that would be different than if the government were not to intervene.

The Chinese government has shown its intention of lessening income inequality, which has grown substantially since the 1980s by instituting programs designed to help its poor. The government has been increasing funding for education and developing programs such as health insurance, a minimum wage.

“It’s hard to imagine a country calling itself socialist unless they intervene with forms of intervention that are designed to help those less advantaged, reduce income disparities and provide some sort of social charities,” Naughton said.

“You talked a lot about how government revenues have been increasing as a share of GDP, but now we’re facing slowing economic growth as well as the increased need for social policy and social welfare,” Thorpe said. “So, how do you foresee the lower economic growth effecting the necessary reforms or if there are even going to be reforms in social welfare policies?”

Naughton answered by saying that the government’s determination to maintain the growth rate is making the reforms harder and that he’s still unsure what reforms will be implemented.

“It’s a tough issue because what we see in the short run is with the government’s determination to try and prevent the growth rate from slipping, it’s making it harder to reform,” Naughton said. “They’re saying we’ve got to keep growth at 6.5 percent, we’ve got to keep investment high in order to make that happen. They have an extremely ambitious target to eliminate poverty and to expand these social nets to provide real universal coverage. So, I think there is a built-in conflict there that they haven’t quite resolved. So, we just don’t know how it’s going to play out.”

Naughton determined the final criterion for determining whether China is socialist as responsiveness. He defined it as the government’s responsiveness to the views and opinions of the population and their incorporation into public policy.

Naughton said that determining whether China is socialist or not is not a particularly important question compared to simply understanding its economic and political policies. However, he said that it’s still important to question such things and look at them from a new perspective.

“This presentation today is really based on the idea that new questions are worth asking,” Naughton said. “Even if we can’t always answer them, sometimes it really makes sense to ask the question from a new standpoint. … It’s a way that sort of encourages us to look at China as undergoing an arc of transformation that involves, in some ways, moving towards something and moving back.”