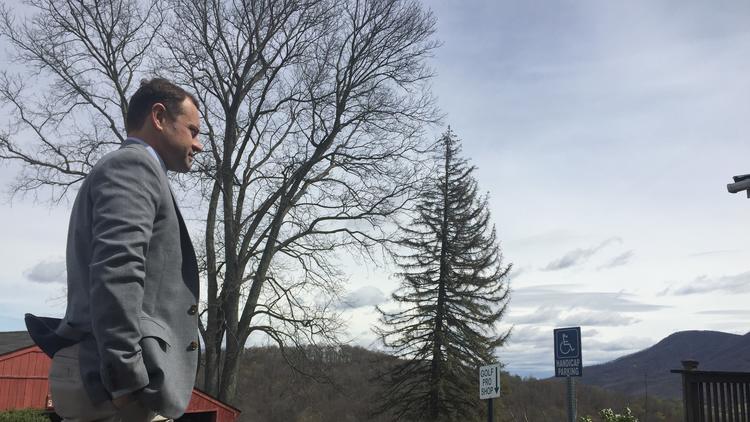 Friday, April 14, at an event co-hosted by the Young Democrats and VOX, Virginia gubernatorial candidate Tom Perriello said that he would not have chosen to run had Donald Trump not won the presidential election.

A former U.S. representative of the 5th congressional district of Virginia, Perriello spoke of forming an opposition to hate and creating a positive agenda for change.

I think we also need to not just resist, we also need to offer a positive vision that will leave no one behind,” Perriello said. “We always want to continue to work on transformation of hearts and minds.”

“I think we also need to not just resist, we also need to offer a positive vision that will leave no one behind,” Perriello said. “We always want to continue to work on transformation of hearts and minds.”

A self-described pragmatic populist, Perriello’s last-minute campaign has excited crowds and garnered national attention. He received the endorsement of Bernie Sanders April 4, and he continues to lead a tour around the Commonwealth, including in coal country. Meanwhile, his opponent, Lieutenant Governor of Virginia Ralph Northam, has received the endorsement of nearly every Virginia elected official. The two will go head-to-head in the primary June 13.

The reason for Sanders’ endorsement became clear as Perriello described his plans for economic and educational change in Virginia, including a $15 minimum wage, two free years of community college or career and technical training and a detestation for trickle-down economics. He also emphasized that he wants to invest more in people, green energy and infrastructure, and he did not shy away from mentioning the possibility of raising taxes.

“We should wake up in the morning with a sense of urgency,” Perriello said. “We have a system right now that’s not investing in people.”

Perriello also spoke about Virginia’s outdated criminal code. He said that the Commonwealth has a code that is 50-60 years out of date, underpaid public defense attorneys and extremely high bail levels, all of which lead to extremely high numbers of imprisoned people. He said that Virginia needs to focus its resources on crimes that  actually threaten public safety.

“In Virginia we make it a crime to be poor,” Perriello said.

Faisal Alami ’20 raised concerns about the Affordable Care Act and how Perriello would go about helping the uninsured.

“Many people are still underinsured or uninsured because private healthcare companies carry a lot of power,” Alami said.

Perriello agreed and said he believes fights like this can be won not in Richmond but in Lee County and Wise County and areas that are not as populous and powerful as Richmond. He also emphasized that he wants to treat addiction as a disease and not as a crime.

“Hopefully if the circus about whether or not to keep the Affordable Care Act is over we can focus on how to strengthen it,” Perriello said.

Perriello discussed gerrymandering and how he would veto any gerrymandered proposals for redistricting, even if they were bipartisan. He also spoke about voting laws in Virginia and said that they make voting extremely difficult.

“We are the birthplace of American democracy; we are also the birthplace of slavery,” Perriello said. “Why on earth are we still voting like it’s the 18th century? I’ve literally been in war zones with easier and more efficient voting than here.”

When asked about money in politics and how he can bring other progressives in on his coattails if he wins, Perriello said he believes the House of Delegates is in play, and that he would much rather have a slate of more diverse candidates than more money. He said the amount of money in politics is “ridiculous” and “corrupt,” yet admitted to benefitting from it himself.

Perriello said that any reform in Virginia would be a step forward, and that it is possible right now because of the momentum progressives currently have.

“We can win this thing because all the intensity is on our side,” Perriello said. “When I talk to Trump supporters now there’s not a lot of fist-pumping, no ‘He really stuck it to the refugees today.’”

Haley Arata ’17 said she also feels the excitement of Perriello’s campaign. The Virginia gubernatorial race has traditionally been a test of the new president, as it is the first election to follow any president’s inauguration.

Arata volunteered on Perriello’s campaign for Congress but said that she especially feels the momentum of this race given current events.

When Perriello announced his candidacy it was like a breath of fresh air,” Arata said. “This is what democracy is about.”

“When Perriello announced his candidacy it was like a breath of fresh air,” Arata said. “This is what democracy is about.”

Perriello said that given the extremism of the White House, now is the time to capitalize on traditionally Republican voters. He said he believes that given the choice of voting party-line or voting for the needs and well-being of their families, Virginia Republicans will switch over.

“People don’t identify with the extremism,” Perriello said. “We need to stand fiercely in opposition to hate.”

When asked about his controversial vote for the Stupak-Pitts amendment to the Affordable Care Act, an amendment which would prohibit the use of federal funds to pay for abortions except in special cases, Perriello said that he had made a commitment to his constituents at the time to not support any health care reform bill that allowed for public funding of abortions.

Perriello said he has always been pro-choice and that this vote was a mistake. He also said that he has evolved on the issue of public funding for abortion and now understands the structural inequalities that it encompasses.

“I won’t just continue to veto attacks on women’s rights but we will have to make sure we are fighting for women’s rights,” Perriello said.

Perriello also addressed another controversy: the fact that he once had an A rating from the NRA and that it had endorsed his reelection campaign. He said that it had become a “nut job extremist” organization and was not what it was in the past.

Talia Schmitt ’17 asked how Perriello was planning on uniting an extremely diverse and disparate state.

Perriello said that his campaign is visiting many red counties for this reason. He said he hopes to unite the commonwealth over shared family issues because the two groups most likely to use the community college system he is promoting are people in rural communities and people of color, the two groups Trump wants to set against each other.

“I believe this year is about something exciting, not just about holding onto the governorship,” Perriello said. “I want to build a coalition not just across parties but across regions and reduce human suffering.”

President of the Young Democrats Sahil Mehrotra ’17 said he was grateful to have had both Democratic candidates for governor on campus and that he is glad students had the chance to question both about their platforms and what they want to do for Virginia.

“I think it’s just great that we can have valuable conversations about what it means to be a Democrat and be a part of the Democratic Party and what the future of the party is,” Mehrotra said.