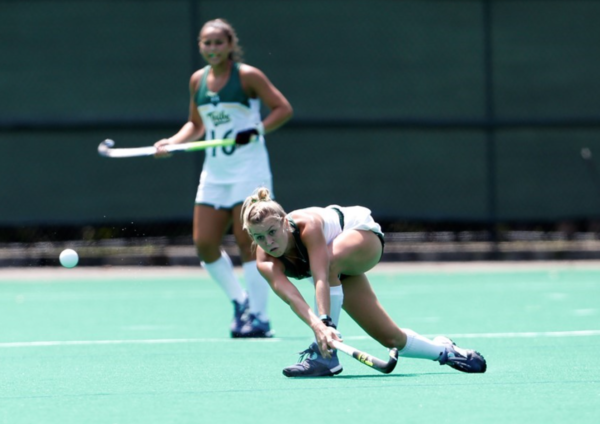 William and Mary played two matches this past weekend and was able to secure victories in both. The College played at home Friday night against Monmouth before traveling to Charlottesville for a neutral-site match Sunday morning against Columbia. After losing a match to the nationally second-ranked powerhouse Duke, the Tribe has won three consecutive matches to improve its record to 3-1 on the year.

Friday, the College (3-1) welcomed Monmouth (2-1) to Busch Field. Neither team was able to score in the first half, but both teams had quality chances in the last few minutes of the half. With less than five minutes remaining in the first half, the Tribe nearly took the first lead of the match. Senior midfielder Booter Ellis fired a shot toward the goal, but the ball deflected off of the post and bounced harmlessly away. Just minutes later, the Hawks fired a shot on goal, forcing sophomore goaltender Morgan Connor to make a save to keep the match tied at zero.

At the beginning of the second half, the College was finally able to score, taking a 1-0 lead. Senior midfielder Emma MacLeod fired the ball into the back of the net off an assist from senior forward Cammie Lloyd to spur the Tribe to a one-goal lead. However, the Hawks fought back with an equalizing penalty-stroke goal with less than 10 minutes remaining in the match. With under three minutes remaining in regulation, the College scored a dramatic match-winning goal. Sophomore forward Woodard Hooper blasted the ball into the net off an assist from Ellis. The Tribe was able to hold on in the final minutes to secure the victory.

Sunday, the College took on Columbia (0-2). The Tribe was able to overwhelm the Lions with a barrage of shots on goal, outshooting its opponents 25-9, including 15-3 in shots on goal. The College jumped out to an early lead just over 10 minutes into the match on an unassisted goal by sophomore forward Cata Days. The Tribe took a 2-0 lead before halftime on a goal from Lloyd. Senior midfielder Katelyn Rennyson got the ball to Lloyd, who finished it off for a goal that padded the lead before the half.

Early in the second half, Lloyd added her second goal of the match — this time without the benefit of an assist — pushing the Tribe’s lead to three goals. Although it was unable to score another goal in the last 30 minutes of the match, the College was able to secure a victory due to a continued strong effort from its defense. The Lions fought to put pressure on the Tribe’s defense for the rest of the match but were denied time and time again. The match concluded 3-0 in favor of the College.

With lots of momentum following a successful weekend and three straight victories, the Tribe will travel to Ann Arbor for two matches next weekend. The College will take on Michigan Friday before squaring off with California-Davis Saturday, looking to maintain its winning record and strong out-of-conference performance.