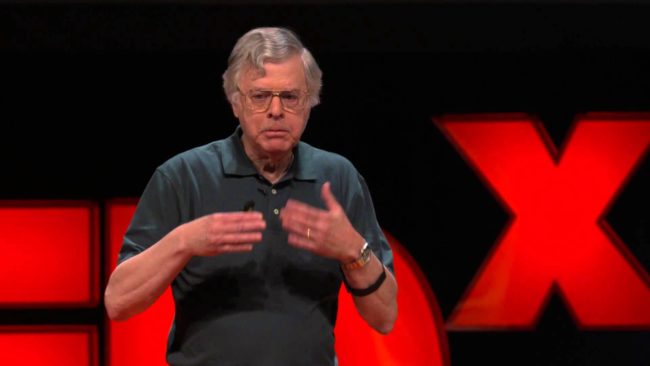 Tucked under the brand-new Integrated Science Center, applied science professor Joel Levine’s office lies somewhere between the sprawling modernism found in NASA’s Langley, Va., office, which was his workplace of 41 years, and the quaint brick facade of McGlothlin-Street Hall, where he’d been teaching since arriving at the College of William and Mary as an adjunct professor in 1990.

We have a long history at the College,” Levine said. “My daughter was an English major here, and my wife got her master’s and her Ph.D. here.”

“We have a long history at the College,” Levine said. “My daughter was an English major here, and my wife got her master’s and her Ph.D. here.”

From 1990 on, during his tenure at NASA, Levine served as an adjunct professor, teaching courses on planetary and atmospheric science in the evenings, after working full-time at the headquarters of extraterrestrial research. He was the first climate science and policy professor at the College.

When Levine retired from NASA in 2011, he accepted a full-time position in the department of applied science, one of the only departments at the College that does not provide bachelor’s degrees. Seeking to work more with undergraduates, Levine said he advocated to teach a course on planetary science through the geology department to students seeking their bachelor’s degree.

As a past co-chair of NASA’s Human Exploration of Mars Science Analysis Group (HEM-SAG), Levine wanted to incorporate some of this research potential into the new undergraduate geology class.

“We wanted 25 percent of the grade [to be] based on … really independent and publishable research,” Levine said. “There are 58 potential landing sites on Mars, selected by the panel I co-chaired, picked because of their scientific interest. I suggested that we divide the students into teams … and have them look in detail at each site, and then identify how an astronaut landing at the site would explore the area. In other words, make up a field trip.”

Each student’s research is published online and is included as part of a published and presented research paper by Levine, who said he couldn’t choose just three teams of co-authors, as he was planning to do as an incentive when he first offered this research challenge.

“I formed a committee of myself, Professor [Christopher] Bailey and three of the top Mars engineers [whom I called at NASA to come help evaluate] … and they all came to [each student’s session],” Levine said. “No team got below an A, and so I presented the paper with 75 co-authors at a big NASA conference at George Washington University.”

Later that year, Levine organized for a few of the Mars mission planners from the Johnson Space Station in Houston to come to the College and spend the day with the students who had co-authored the paper.

Because of Levine’s push to teach younger students, the first astronauts on Mars could walk a route developed at the College by undergraduate researchers.

“I think it’s good for the students because a lot of them are really interested in NASA-related work,” Levine said. “They’re interested in planetary missions, comets and meteors, so I’m a good resource. Everyone in the class was extremely supportive of NASA, of sending humans to Mars … and I went to Washington and spoke to the NASA administrator [about their support].”

Levine also managed to find partial funding for some of his undergraduate students to participate in a conference on Mars dust, one of the Mars Exploration Program’s “long poles,” or critical but difficult steps in any project or mission. Because some of the atmospheric dust on Mars is as pervasive and toxic as it is small, space suits and machines must be equipped to protect human explorers and their gear from its harmful permeation.

I personally find William and Mary students outstanding,” Levine said. “I get questions in my class that I really have to think about. After 41 years of worrying about budgets and different administrations cutting programs, it’s refreshing to be with a group of very bright, young people.”

“I personally find William and Mary students outstanding,” Levine said. “I get questions in my class that I really have to think about. After 41 years of worrying about budgets and different administrations cutting programs, it’s refreshing to be with a group of very bright, young people.”

Aside from being a devoted supporter of undergraduate education, Levine and his wife, Arlene Levine, who is also a NASA scientist, are dedicated to increasing racial and gender diversity at NASA and in the science, technology, engineering and math fields.

“Whenever you see a rocket launch and you see the NASA control room, you see about a hundred middle-aged white men,” Levine said.

Levine and his wife, who retired from NASA on the same day, decided to do something about this. His wife began investigating the lack of gender and racial diversity in the NASA space program. Despite NASA’s attempts to hire more diversely, it wasn’t able to fill gender and racial quotas. The preparation of students at the elementary level was key, Arlene determined. And so, in 2004, she and Joel developed a series of interactive television programs through NASA and the National Alliance of Black School Educators (NABSE) to talk about topics in space science once a month.

“We did that for six years,” Levine said. “I was the lecturer and she was the director. I spoke for 45 minutes and then we had questions transmitted back to us in the NASA studio live … and when we ran out of our 60 minutes, they would email them, and sometimes I would spend a day the next day answering questions.”

In addition to working with young black students in elementary schools, the Levines also worked with Native Americans living on reservations, developing a summer program for young Native-American students interested in space and science through the American Indian Science and Engineering Society (AISES).

Levine’s adamant promotion of getting children interested in science early comes in part from the initial support he received when he expressed a fascination for the cosmos as a young boy in Brooklyn, N.Y.

“My grandmother and aunt bought me a telescope, but then my grandmother saw me pursuing this, and said ‘how can you make a living by looking at Mars?’” Levine said. “My parents had no problem with my going into science … although they didn’t think I’d make a living.”

From a sixth-grader looking at the first color pictures of Mars in the 1950s to a member of the NASA Hall of Honor in 2017, Levine has many titles and roles, and being a continuing educator at the College is one of them.