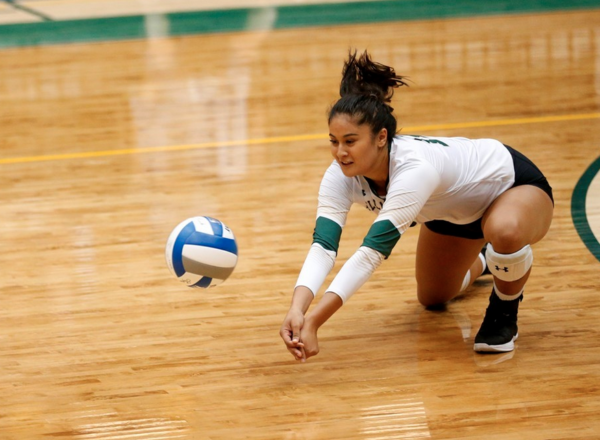 The Tribe dropped a close first set 25-20; however, it came back with a 27-25 victory in the second set. The final three points of the set came from a kill by Brown, Biniak and sophomore hitter Casey Foote, respectively, each off a Brenner assist. The Tribe had the longest streak of the set, going on a five-point run thanks to three consecutive attack errors by Delaware’s outside hitter Maria Bellinger, as well as a kill and block each for Brown and freshman hitter Kate Dedrick.

In the third set, despite an early 6-1 lead, the Tribe could not keep up its momentum. The Blue Hens quickly tied the set up 9-9 and then proceeded to take the lead, which they maintained through the set. The College dropped the set 25-19. Again, jumping into an early 2-0 lead, the Tribe managed to follow through with its energy this time. Brown dominated a five-point run with three kills and a block, broken up only by a kill by Biniak. The College won the fourth set 25-23, the final two points coming from attack errors by Delaware’s outside hitter Brooke Robertson and middle hitter Daria Robinson.

The fifth and final set of the contest was controlled by the Blue Hens. An early four-point run put them ahead 4-1, and the Tribe never got a chance to tie or take the lead. The College dropped the final set 15-9, resulting in a 3-2 loss to Delaware in the first CAA matchup of the season.

Brown scored the College’s only ace of the match. Biniak was in the lead with 14 kills, followed by Pippus with nine and Foote with eight. Brenner contributed 19 assists to junior setter Katie Kemp’s 18.

The Tribe dropped the first set 25-14, never taking the lead after tying the match 5-5 early on. The final point for the College came from a kill by Brown off a Kemp assist. The Dukes dominated the second set, starting with an early nine-point run, putting them up 9-0. The Tribe’s first point of the set came off a service error by the opposing team. The College never got within three points of the Dukes.

An unforeseen energy emerged from the Tribe in the third set as it took an early 5-0 lead over JMU. Not once did the College relinquish its lead, resulting in a 25-21 victory. The closest the Dukes came was tying the set at 16 points.

Unfortunately for the Tribe, it could not maintain the energy exhibited in the third set, ultimately dropping the fourth and final set of the contest 25-16. Half of the points from this set came from Biniak attacks.

The Tigers outscored the Tribe in total points (59-33), kills (48-28), blocks (8-4), assists (41-28) and digs (38-36). Biniak, although leading the College offense, contributed only 10 kills. Brown again scored the Tribe’s only ace, as well as contributing two blocks. Kemp contributed 12 assists, followed by Brenner with nine.

By far the most competitive, the Tigers came out victorious 25-22 in the first set. Towson maintained its lead for the entire set, but the Tribe came close after a five-point run, closing the gap to 18-15.

In a less competitive second set, the Tribe fell 25-13. Two four-point and two five-point runs by the Tigers made it impossible for the College to take the lead after tying the score at 3-3. The third and final set was dominated by a six-point run by Towson; the Tribe neither tied the set nor took the lead once. The College dropped the final set 25-14, resulting in its third consecutive conference loss.

The Tribe will hit the road again this weekend to challenge Elon in another CAA matchup.