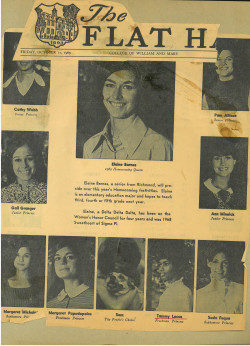 When it was time to start thinking about colleges, my parents took me on the typical college tour trip. We didn’t go too far from my hometown of Richmond. We visited Hampton University, Virginia State, Fisk in Nashville and North Carolina Central — all members of the HBCU (Historically Black Colleges and Universities) network.

Predominantly white schools were also in the mix, having only recently become a significant option for black students. Some rose to the top from stories told by recent high school grads who came back to share their experience. I learned of others from my high school quarterback boyfriend who was aggressively recruited by many white schools across the country. When it came time to make that important decision, I chose the College of William and Mary in Williamsburg, Virginia – also the boyfriend’s choice.

It is interesting to note the reaction that decision elicited then and now. While my parents were not enamored of the boyfriend, they were of my college choice. At the time, not only my parents, but also my parents’ friends, and every adult with whom I shared the decision was proud. Virginians knew that William and Mary liked to refer to itself as the Ivy League of the South. It was, and is, a small, state school with a well-regarded reputation for academic excellence. Being accepted into William and Mary was prestigious for a white student. Acceptance was regarded as even more extraordinary for a black student. At that time, there were just a handful of black students on campus. The first was accepted in 1967, only two years before my freshman year.

Acceptance was regarded as even more extraordinary for a black student. At that time, there were just a handful of black students on campus.

When people learn that I graduated from William and Mary, the reaction is characteristically divided by race. White people, particularly white Virginians, nod their heads positively. Usually, this fact elevates me in their hierarchy of intellectual excellence. Many black people, on the other hand, shake their heads questioningly. Why did I forego an education grounded in the richness of black culture at an HBCU to attend predominately white William and Mary? They sometimes ask outright: “Did you get a scholarship?” And when I answer, “No,” they either ask me, “Then why did you go there?” or they silently wonder.

The answer has many layers, but at its core, you must consider the times.

My grades were excellent. While not in the top 10 of my high school graduating class, I was in the top 15, a member of the National Honor Society and active in everything from student government to the school yearbook. It was never actually said to me, but I had been groomed to be one of the first. I knew that I was expected to walk through doors as they opened for blacks. Attending William and Mary was one such door. It was seen as a stepping stone, especially in Virginia, to other career opportunities that would not have been possible just a few short years previously. I sincerely felt it was my responsibility to accept when William and Mary accepted me.

Now, in hindsight, the adult me has regretted this decision. College choices back then truly were black or white. I can think of no school, at the time, which was well integrated. While I received an excellent education, I do not have rich memories of campus camaraderie or of Greek life in the sisterhood of a sorority.

Even though the student body voted me onto the homecoming court three out of my four years (the first black homecoming princess at W and M), I’ve only returned to homecoming twice.  And while I made a few good friends and have no recollection of racism while there, overall when I think back on college, there is just an emptiness, an experience devoid of the oh-so-important social fabric of college life.

I know that my life’s trajectory would have been different – quite different – had I made another choice. Better? I’ll never know.

This article was originally published as a blog (daughtersofthedream.org) (October 1, 2017) . Email Tamara Copeland at cozybaycottage@gmail.com.