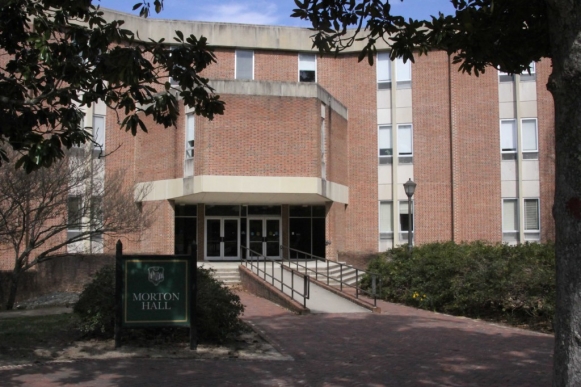 Flyers displaying some commonly held political beliefs propagated by the Trump administration were posted in Morton Hall Monday, strategically next to flyers from departments with an opposing viewpoint. One may argue that under the First Amendment, opposing viewpoints are important and the backbone of an effective democratic society. For the most part, I would agree with these people. However, those principles do not apply in this case, as these posters were spreading dangerous misinformation.

One flyer indicated that affirmative action was “government-mandated racism.” Most people with this view believe that color-blind policies are more effective and that white students are disadvantaged by these policies. These people are wrong. Glenn Loury and Roland G. Fryer, two economists whose research partly specializes in labor market discrimination, wrote a paper for the National Bureau of Economic Research in 2005 debunking the myths of affirmative action, including those that overstated its benefits. Two of the myths they addressed were the ideas that white students are disproportionately hurt by affirmative action, and that color-blind policies were more effective. They disproved both using basic economic theory and empirical evidence.

Another flyer protested the idea of a gender wage gap, arguing that it does not exist because of the caveats with the “77 cents on the dollar” statistics. It is quite ironic that the posters used data to back up their claim in this poster while ignoring it in the last one. Nonetheless, even though the statistics are correct, the interpretation of them is so misleading and egregious that they might as well be seen as lies. Although it is true that 77 cents on the dollar statistic doesn’t necessarily mean there is gender discrimination in the labor market, it also does not mean that there isn’t. The economic literature is mixed on how large it is, but no matter what is controlled for, there is almost certainly an “unexplained” gap in wages between men and women, for which it is perfectly reasonable to hypothesize discrimination. Additionally, the idea that men simply select higher wage industries, and that that fact alone debunks the wage gap, is hilariously misinformed. It ignores unobservable factors, most notably societal discrimination against women, that may have led to them choosing certain industries over others. Data that is not put into its proper context is meaningless and nothing more than propaganda.

But perhaps the most dangerous and infuriating flyer was the one calling on citizens to report crimes by immigrants to the ICE. There is no need for any statistics or research in opposing this flyer. It is morally reprehensible to post such a thing, knowing that there are undocumented students at this school, and students with undocumented family members that are directly threatened by such a flyer. Alarmism surrounding undocumented immigrants is based on racist caricatures of Hispanic people as criminals, propagated to justify the building of “the wall.”

Transparent dialogue and discussion surrounding the issues are important. However, anyone who had the idea to post these flyers is clearly not interested in discussion of any sort. There is a difference between having opposing viewpoints and spreading information that is either dangerous or flat out wrong. The people who posted these flyers do not deserve any kind of platform, and it is our duty as human beings to detest them.