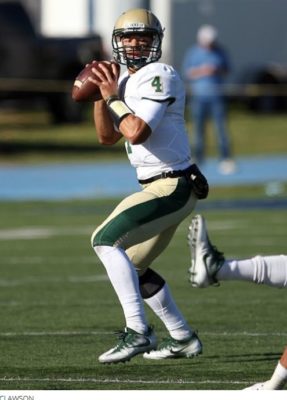 William and Mary remains winless in Colonial Athletic Association play after falling to Maine 23-6 on the road Saturday, the defeat extending the College’s losing streak to five.

“We got outplayed,” head coach Jimmye Laycock ’70 told Tribe Athletics. “We didn’t take advantage of some opportunities we had at the beginning of the game which we really should have, and then as the game wore on, they pretty well outplayed us. Couldn’t get anything going offensively … running or throwing, and we didn’t play as well as we have been defensively.”

Mitchell’s next pass, on 3rd and goal from the six-yard line, was intercepted by Maine’s defensive back Darrius Hart, the Tribe squandering its best starting field position of the game. After a quick Black Bears three-and-out and a short punt, the offense once again started inside the Maine 30-yard line, but could only move the ball forward five yards. Sophomore kicker Kris Hooper nailed a 41-yard field goal to give the Tribe a 3-0 lead, but the advantage could have been much larger.

Hooper’s field goal was notably the only time the Tribe has scored in the first quarter of a CAA game so far this season.

The 3-0 lead lasted less than five minutes, the Black Bears driving deep into College territory and benefitting from several Tribe penalties. Maine stalled at the two-yard line, however, and Black Bears kicker Brandon Briggs knotted the score at three with a 19-yard field goal.

Mitchell and the Tribe offense failed to score again in the first half. Missing senior wide receivers DeVonte Dedmon and Daniel Kuzjak, as well as senior offensive lineman Chris Durant, the College found it difficult to move the ball past midfield as halftime approached, Mitchell completing just one of 12 pass attempts.

Maine went ahead 6-3 midway through the second quarter, Briggs converting a 43-yard field goal attempt, after which the Black Bears never relinquished the lead. The Tribe deficit grew to 10 just before halftime, Ferguson finding Maine tight end Drew Belcher on a nine-yard touchdown toss to cap off a six-play, 69-yard drive.

Laycock and his coaching staff replaced Mitchell with junior quarterback Tommy McKee to begin the third quarter. McKee immediately gave the College offense a spark, the Tribe driving to the Maine 17 before settling for a Hooper field goal attempt. Unfortunately for the College, Hooper’s kick from 34 yards out sailed wide right, the Tribe’s best drive of the game up to that point resulting in no change on the scoreboard.

McKee once again put the Tribe in a position to score, and this time Hooper drilled a 25-yard field goal to cut the deficit to seven, the College seemingly starting to seize back the momentum from the Black Bears.

“He did alright, he’s in a tough situation,” Laycock said of McKee’s performance to Tribe Athletics. “Shon was really struggling there in the first half, just really struggling making decisions and pulling the string on a couple throws. Tommy’s a good runner, that’s the one thing we know about him. He can run the ball on the read, and he made a couple really good throws under pressure.”

The offense having made it a one-score game, the Tribe defense failed to stop Maine on its next possession. The Black Bears put together a 10-play, 75-yard drive, and Maine running back Josh Mack, the CAA’s leading rusher, polished it off with a two-yard touchdown run. Mack led all rushers Saturday with 99 yards on 24 carries.

A quick Tribe three-and-out gave the ball right back to the Black Bears offense, which once again drove deep into College territory. Briggs converted his third field goal of the afternoon, this time from 23 yards out, giving Maine a commanding 23-6 lead with just over eight minutes to play.

The College got one last shot to put points on the board, but the drive stalled at the Maine 43, the Tribe turning the ball over on downs after a McKee incompletion on fourth down. Mack and fellow Black Bears running back Jo Fitzpatrick ran the ball effectively against a weary College defense, allowing Maine to retain possession and run the clock out on a 23-6 win without any further incident.

The Black Bears outgained the Tribe by nearly 150 yards Saturday, the College generating less than 200 yards of offense for the second time this season. McKee completed five out of 10 passes for 43 yards after his introduction, finishing as the Tribe leading rusher with 47 yards on seven carries. The Tribe has now failed to score 20 points or more in all five of its CAA games this season, losing all five contests, and is averaging just 14.4 points per game in 2017.

The Tribe will try to end its losing streak upon returning to Zable Stadium next Saturday for a matchup with CAA foe New Hampshire. The game is scheduled for a 2 p.m. kickoff.