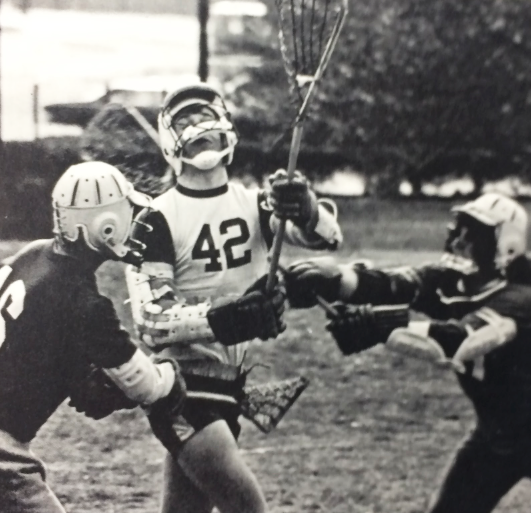 The morning of Jan. 3, 1984, former head coach of the varsity men’s lacrosse team Clarke Franke ’76 M.Ed. ’79 received a phone call from his boss, former men’s athletic director Jim Copeland, letting him know that his upcoming season with the team would be his last. That morning, Copeland and women’s athletic director Millie West announced that six varsity sports would be cut, and men’s lacrosse would be one of them.

Franke, who had been on the team himself for three seasons prior to graduating, had worked as the head coach since 1979. The morning he found out that the men’s lacrosse program was getting cut, he was at his main job, working as a teacher at Lafayette High School.

“I will never forget, it was a Tuesday morning in early January in 1984, and Jim Copeland was the athletic director at the time,” Franke said. “I was at the high school before the school started, and they paged me to the English office to take a phone call, and I found out they were cutting some of the men’s programs [at the College].”

The 1984 decision was the result of budget cuts. At the time of the announcement, West said that she and Copeland had been approached by the Board of Visitors in the spring of 1983 regarding their budget, because expenditures and revenues were not balancing out. They initially tried other methods, like raising the student athletic fee and working to balance their respective budgets. However, when Copeland and West realized this was not possible, Copeland said they began to decide which sports would be cut.

Men’s lacrosse was just one of the sports to go — men’s fencing, swimming and riflery as well as women’s golf and fencing were cut, and the sub-varsity programs for women’s field hockey and lacrosse were also discontinued. The cuts in total amounted to $100,000.

Now, over 30 years later, men’s swimming and women’s golf have returned to Tribe Athletics, but men’s lacrosse remains just a club team at the College of William and Mary. Additionally, varsity programs have been established for women’s field hockey and lacrosse. For some like Franke, this has tinted memories of collegiate experiences and reshaped careers.

The men’s lacrosse team at the time of the budget cuts had not rounded out its second decade of existence, and the sport was just gaining traction in Virginia.

Tom Doughty ’70 was one of the team’s captains during its first years as a varsity sport. For him, lacrosse was a large part of his experience on campus.

“The lacrosse program was a big part of my life while I was a student,” Doughty said. “I was a supporter of the team and a fan after I left. I know a lot of people down through the years because I stayed at William and Mary to go to law school, and I was the assistant coach while I was there. I was really disappointed to see it go.”

Doughty said that during his freshman year at the College, lacrosse was still fairly obscure, especially in Virginia. He said that it was more popular at Ivy League universities, but that there were still other students who had grown up playing it in his freshman class.

During the mid-1960s, a physical education coach, Jim Carpenter, agreed to coach a club men’s lacrosse team. As it grew in popularity, the College promoted it to a varsity sport, and Carpenter stayed on as the head coach until 1972.

“There was an immediate upgrade in the quality of competition. We switched from a schedule that played some other club to one that played other, better varsity teams,” Doughty said. “We were attracting and recruiting much better, and the quality of the team improved.”

Following Doughty and Carpenter’s careers with the men’s lacrosse team, Tribe Athletics Associate Director of Development Al Albert ’69 began his tenure coaching for Tribe Athletics. Albert went on to serve as the head coach from 1972-78, and eventually left to begin coaching the men’s soccer team.

Albert said that one of his biggest challenges during the years he was coaching was recruiting out-of-state athletes without scholarship money.

“We had a lot of success in the early 1970s recruiting in Baltimore and Long Island, and we were successful, but with limited scholarship money,” Albert said. “Back then, there weren’t in-state kids playing lacrosse, and we didn’t know it was going to take off in Virginia. It was looking pretty tough to recruit kids without much scholarship money.”

When Albert was at the College, he too played on the team from his sophomore to senior seasons, but while the team was still considered a club sport. The year the varsity team was founded was the year after Albert graduated, but Carpenter stayed on to coach the team.

The lacrosse program was a big part of my life while I was a student,” Doughty said. “I was a supporter of the team and a fan after I left. I know a lot of people down through the years because I stayed at William and Mary to go to law school, and I was the assistant coach while I was there. I was really disappointed to see it go.”

“I was a student, so I don’t know what went into the decision of starting lacrosse, but at that point in the mid-60s, the team began to expand and there were a number of sports added,” Albert said. “There was no master plan for how we were going to pay for all of those things, nobody really knew how much athletics in college would grow. And of course, at that time, there were two separate [athletic] departments, and we didn’t have the impact of gender equity.”

One part of the budgetary problem arose from Title IX, which was established in the Education Amendments of 1972. It mandated that no student should be denied the benefits of athletics or discriminated against in an athletic program, and it required colleges to have equal opportunities for male and female athletes. Additionally, Albert said there was a recession hitting the College in the early 1980s.

“That’s really when things started to come apart,” Albert said. “You had the combination of starting to spend more money on the women’s side, but also having less money. It was basically the perfect storm.”

While Albert was working as the head coach of the men’s soccer team, Franke stepped up as head coach, reshaping his career for the first time around lacrosse.

“I fully expected when I graduated that I would go back to the Baltimore area and teach school and coach lacrosse, and I had a job in one of the local school systems in the Baltimore area to do that,” Franke said. “Al asked me to stay on instead as his assistant. I had a great time at William and Mary and I got to stay in Williamsburg. … For me personally, that was a lot of fun. I love living and working in Williamsburg and at William and Mary, but when the team got discontinued, one of the reasons I was going to stay was gone.”

Franke said that one of his favorite memories from coaching was during his first year, when the team had its best record in 1979. At the time that the team was cut, its 17-year record was 94-89-1.

He too felt the challenge of recruiting talented players, although by the late 1970s, he said there were growing programs in Norfolk and Richmond.

“Obviously, you dealt with admissions and the in-state and out-of-state thing,” Franke said. “That’s changed dramatically in the last decades; lacrosse has grown drastically and there’s lots of outstanding programs in Virginia now. We struggled to get five or six guys a year that could get through the admissions process and come to William and Mary. We had outstanding students in our program, we were a Division I team, but we didn’t have any scholarship money. Guys had to pay the full bill to go to school, and that was a hindrance to out-of-state students.”

For Franke, the phone call he received in 1984 led him to pack up and move back to the Baltimore area. At the time, he believed that his spring season would be the very last one that the team would play. However, in the following months, Copeland and West worked to accommodate freshmen athletes who had been recruited. Those freshmen could transfer without NCAA penalties, but for lacrosse, Franke and Copeland reached a compromise where if the team could come up with a skeleton budget, the team could continue until the members of the team graduated.

Alumni contributed money to fund the skeleton budget, and the College agreed to match what the alumni group came up with. Franke said that the team existed as essentially a club team in 1986, when the athletic department announced that it wanted to end the program officially. For those last two years, Bill Devine J.D. ’86 coached the team.

Now, the question of bringing back the men’s lacrosse team is not an easy one, Albert said. Because of Title IX stipulations, to add a men’s team, the College would have to add a comparable women’s sport and be able to pay for both of them.

“Lacrosse was a huge part of my college experience, it can’t not be,” Doughty said. “I am very thankful that I had the experience and very sorry that I do not have the team now. William and Mary is a natural place for a lacrosse team. Its peer schools all have men’s lacrosse.”

For Franke, it still is disappointing to him that the College does not have a men’s lacrosse program.

“It still hurts to this day,” Franke said. “I grew up here in Baltimore, I am now 63 years old, and I played lacrosse starting when I was five. It is very close and near and dear to me. I absolutely loved being at William and Mary, I loved playing lacrosse at William and Mary. I will tell you that when I found out that morning, it was like getting the wind knocked out of you. … I think most people feel like there’s a hole in the fabric of their William and Mary experience. I love the school, I promote the school … but I feel like there is something still missing from my little part of that world, and that was losing lacrosse.”