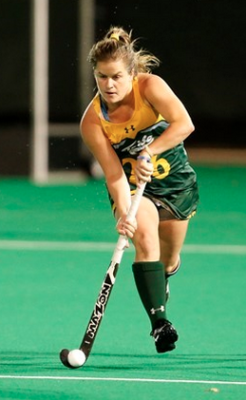 Last weekend, William and Mary traveled to Newark, Delaware for the Colonial Athletic Association tournament. The top four teams in the conference, Delaware, James Madison, the Tribe and Northeastern qualified for the semifinals Nov. 3. In the first semifinal, the top seed and four-time defending champion Blue Hens defeated the Huskies, 3-1. Then, the College upset the 15th-ranked Dukes, 2-1, coming back from an early deficit to advance to the championship. Nov. 5, the Tribe came up short of earning an automatic bid to the National Collegiate Athletic Association tournament. The Blue Hens erupted for three second-half goals to claim a 3-0 victory over the College and win their fifth-straight CAA championship.

Friday, the Tribe (13-7, 5-3 CAA) played its second-straight match against its archrival, the Dukes (12-6, 5-2 CAA). In its regular season finale at home on senior night, the College took a first-half lead in an evenly played match against James Madison. However, the Dukes used two second-half goals, including one in the final five minutes, to claim the second seed in the CAA tournament.

In last weekend’s match in Delaware, the host site for the tournament, the Tribe fell behind in the first 10 minutes to the Dukes. After a couple of early shots by senior midfielders Cammie Lloyd and Emma MacLeod, the Dukes converted on their first shot of the match. Just over seven minutes into the match, midfielder Miranda Rigg scored an unassisted goal to give the Dukes an early 1-0 advantage. She blasted a low shot into the right corner of the goal that sophomore goalkeeper Morgan Connor was unable to save.

Four minutes later, the College had an opportunity to bounce back and even the match at one goal apiece. The Tribe earned a penalty corner, and sophomore forward Cata Days lined up to take it for the College. She passed the ball to senior midfielder Booter Ellis. who fired a shot on goal, but goalkeeper Sara Kraeutler made the save to keep the Dukes in front. Most of the next 15 minutes were played away from each teams’ goals, as there were no shots and very little chances until much later in the first half. The Tribe had the next shot, off of the stick of junior midfielder Jenny McCann with 7:32 remaining in the half. This time, the Tribe was able to convert on its scoring chance. Lloyd had the ball to the side of the net and fired a cross in front of the goal. McCann was able to get her stick on the ball and redirect it into the goal to tie the match, 1-1. The College earned its second penalty corner of the half a couple minutes later. Once again, Days took the corner and this time ended up getting the ball back to take the shot herself. However, her shot flew harmlessly wide of the goal. Neither team was able to get another shot before halftime, and the match went to the break tied, 1-1.

Just over two minutes into the second half, the Dukes threatened to reclaim the lead. Midfielder Corey Mayer had two consecutive shots. Her first shot was saved by Connor, but rebounded back toward Mayer to give her another chance to score. However, her second shot was blocked and did not get all the way to Connor. Just two minutes later, the Tribe nearly took its first lead of the match on a shot by freshman midfielder Ella Donahue. Midfielder McKenzie Ridgely made a defensive save for the Dukes to keep the match tied and prevent Donahue from scoring the second goal of her career. With just over 25 minutes remaining in the half, the Dukes earned their second penalty corner of the match. Rigg took the corner, got the ball back and fired a shot towards Connor. However, the Tribe’s defense stayed strong once again and blocked the shot.

After the Dukes’ penalty corner, the College started to take control of the match momentarily, earning a penalty corner less than a minute later. Off of the corner, Days found Ellis, who fired another shot on goal for the Tribe, but Kraeutler kept the match tied with a big save. However, the rebound came to sophomore defender Christie van de Kamp. She ripped a shot at Kraeutler, but she was up to the task again. With about 20 minutes left in the match, the College was able to convert on a penalty corner for the first time all match. Days passed to Ellis again, but as Ellis hit the ball toward the goal, Hooper was able to tip the ball over Kraeutler. The Tribe took a 2-1 lead on the goal. Most of the action in the final minutes was dominated by the Dukes. Rigg had three shots in the 12 minutes after the Tribe’s goal, one of which hit the post, but the College still clung to a 2-1 advantage. As the match came to a wild finish, the Dukes had five penalty corners in the last five minutes, but Connor made saves on both of the shots that resulted from them. The Tribe held on for a 2-1 victory, setting up a championship match with the Blue Hens.

Looking to avenge another regular season loss, the College took on the Blue Hens (15-4, 8-0 CAA) in the CAA championship Sunday. The Tribe held most of the possession in the first half and limited the Blue Hens’ chances. Senior midfielder Estelle Hughes and Lloyd each created shots in the first 10 minutes of the match. Hughes’ sailed over the top of the goal and Lloyd’s was saved by goalkeeper Emmeline Oltmans. Despite controlling most of the first-half possession, the College was outshot 7-2 in the half and gave up four penalty corners, while earning none of its own. Many of these chances for the Blue Hens were in the last 10 minutes of the first half, but Connor and the rest of the Tribe defense stood tall and kept the score even.

After the College failed to capitalize on a lot of possession in the first half, the Blue Hens made the Tribe pay with a three-goal outburst in the second half. The scoring started in the first minute of the half, with forward Taylor Lister breaking the scoreless tie. She knocked a loose ball into the back of the goal to give the Blue Hens a 1-0 lead that it would not relinquish. The College threatened to even the match in the following minutes, but was once again unable to convert. Lloyd nearly scored, but her shot was stopped on a defensive save by defender Sarah Horgan. Just two minutes later, sophomore midfielder Annie Snead took the Tribe’s first and only penalty corner of the match. However, sophomore midfielder Cassidy Goodwin’s shot off of the corner was not on target. After these two chances, the momentum swung back to the Blue Hens until they were finally able to extend their lead. On their seventh penalty corner of the match, the Blue Hens finally converted. Forward Greta Nauck, CAA player of the year, scored her 23rd goal of the season to put the match nearly out of reach for the Tribe. Just five minutes later, Nauck scored off another penalty corner to put the Blue Hens up 3-0. The College was unable to cut into this lead, and the match ended with Delaware winning the CAA championship, 3-0 over the Tribe.

The College is unlikely to make the National Collegiate Athletic Association tournament with an at-large berth, so the Tribe is most likely done for the season. The Blue Hens will continue to play in the NCAA tournament as an automatic qualifier, where they will represent the CAA. They will be looking to defend their title from last year, when they won the national championship. The NCAA tournament begins with the play-in games later this week.

Last week, the CAA announced its selections for first and second team honors for the 2017 season. The Tribe was well represented, with six players earning honors. Lloyd, MacLeod and senior midfielder Erin Menges were named to first team all-conference. Menges was also selected as the defensive player of the year in the CAA. Hughes and Ellis were chosen as second team all-conference. Finally, freshman forward Melanie Strik was named to the CAA all-rookie team.