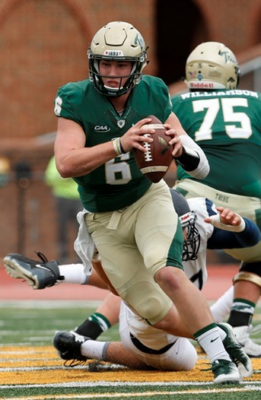 After a 23-6 loss on the road against Colonial Athletic Association opponent Maine, William and Mary (2-7, 0-6 CAA) returned home to take on 21st-ranked New Hampshire (6-3, 4-2 CAA) for another conference matchup. The College was able to move the ball some in the first half, but failed to convert in the red zone. The Wildcats were able to use their high-powered pass attack to take an early lead and cruise to a 35-16 victory at Zable Stadium. Saturday’s defeat was the College’s sixth in a row; it has yet to pick up a win in conference play this season.

The Wildcats jumped ahead early by scoring on their first drive of the game. After receiving the opening kickoff, the Wildcats started their first possession at their own 25-yard line. Picking up a total of seven yards after two straight running plays, the Wildcats were faced with a third down, needing to pick up at least three more yards. Quarterback Trevor Knight found running back Evan Gray for an eight-yard gain, giving the Wildcats a first down. Three plays later, the Wildcats converted on third down again. Knight’s 11-yard strike to wide receiver Kieran Presley put the Wildcats into Tribe territory at the 46-yard line and gave them a fresh set of downs. Two plays later, the Wildcats executed on the first of several successful long passing plays in the game. Knight hooked up with wide receiver Neil O’Connor for a 48-yard touchdown. Less than four minutes into the game, the Wildcats seized a 7-0 lead. They would never relinquish this lead.

The Tribe’s first drive lasted over six minutes, but ultimately ended in a punt by freshman Will Michael. Junior quarterback Tommy McKee, who played all 60 minutes as quarterback, was effective on the opening drive. After two completed passes, McKee scrambled for nine yards to pick up the first down at the Tribe 39-yard line. McKee picked up another first down with his legs three plays later, gaining three yards this time. After another third down conversion, the College stalled at the Wildcats’ 35-yard line. Michael’s punt bounced inside the five-yard line and was downed at the one by redshirt freshman wide receiver Zach Burdick.

Despite starting their second drive in the shadow of their own goalposts, the Wildcats were able to put together another scoring drive. Early in the drive, the Wildcats faced two more third downs, but picked both of them up. The Wildcats broke into Tribe territory at the 49-yard line when Knight completed another long pass, this time to tight end John DiCaro. The catch and run totaled 43 yards and set the Wildcats up with a first-and-goal from the six-yard line. Just two plays later on the first play of the second quarter, Knight found running back Donald Goodrich to extend the Wildcats’ lead to 14-0.

However, McKee and the College were able to fight back and cut into the deficit on their next drive. On the second play of the drive from the Tribe’s 39-yard line, McKee completed a pass for six yards to junior wide receiver Isaiah Kinder, who drew a 15-yard personal foul penalty on the defense. This penalty moved the ball to the Wildcats’ 40-yard line, where the College’s drive continued. After picking up two yards on first down, McKee found freshman tight end Nick Muse for a 30-yard pickup. This put the Tribe inside the 10-yard line. McKee finished off the drive for the College with two straight runs, including a two-yarder to cut the deficit in half, 14-7.

On the next Wildcats drive, once again, the College’s defense was unable to stop the Wildcats’ air attack. After starting at the 10-yard line, long passes helped the Wildcats move down the field. Knight completed a 37-yard pass and 19-yard pass to set the Wildcats up at the Tribe’s 25-yard line. After a pass interference penalty against the College, Knight threw his third touchdown pass in as many possessions, this time to wide receiver Nick Lorden. The extra point sailed through the uprights, giving the Wildcats a 14-point lead again, 21-7.

“Defensively we had a very difficult time. We’ve been playing really good defense up to this point. For one reason or another we were not able to react, especially to their passing game,” head coach Jimmye Laycock ’70 said.

The final two possessions for the College were crucial in preventing it from having a chance to come back for its first CAA victory. With 7 minutes, 53 seconds remaining in the half, the College took over at its own 44-yard line. After a first down, McKee took a shot downfield looking for Burdick. While the ball fell incomplete, Burdick was able to draw a pass interference call against the Wildcats, moving the ball to the Wildcats’ 30-yard line. Three straight rushing plays by Evans, sophomore running back Albert Funderburke and McKee set the College up in the red zone at the 10-yard line. However, McKee threw two straight incomplete passes on second and third down and the drive stalled. Nevertheless, sophomore kicker Kris Hooper was able to make the 27-yard field goal to cut the lead to 21-10. After the Wildcats moved into Tribe territory once again on the next drive, the College finally stopped them on third and fourth down, allowing the Tribe offense to take over at its own 29-yard line with 1:30 left in the half. McKee completed several passes to move the Tribe down to the Wildcats’ 11-yard line, but the drive stalled again. Hooper came in for a 28-yard field goal as the first half ended, but he missed it, and the Wildcats took a 21-10 lead to the half.

“We did not convert like we needed to,” Laycock said. “It was encouraging on offense, but it certainly was not good enough.”

After a McKee interception and a punt by each team, the Wildcats were able to extend their lead even further with another touchdown pass by Knight. With 4:22 remaining in the third quarter, Knight found Presley for a touchdown for the second time in the game. With the touchdown, the Wildcats took a three-possession lead 28-10. In the fourth quarter, the Wildcats scored their fifth touchdown of the day before McKee rushed for his second score of the day, bringing the score to 35-16 after Hooper’s extra point bounced off the upright. However, with just under 2:00 remaining, the Wildcats simply knelt down three plays in a row and let the clock run out.

With this 35-16 loss, the Tribe will continue to try to earn its first conference victory of the season with two games left. It will host Towson for the final game of the year at home Nov. 11 before traveling to archrival Richmond Nov. 18 for the season finale at Robins Stadium.