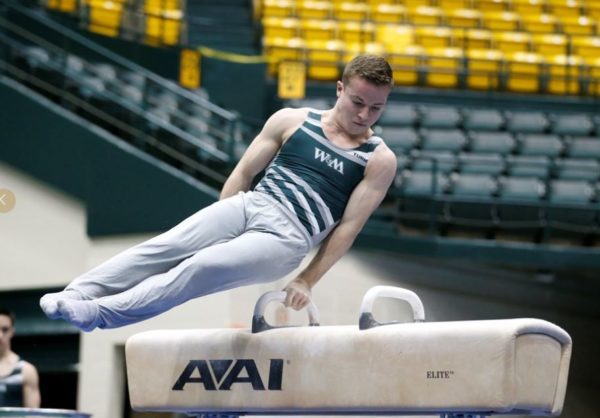 Saturday, the William and Mary men once again traveled to Annapolis, where they faced off against Navy and Temple and took second place in the tri-meet. The Tribe posted a season-high score of 389.3, trailing the host Navy (396.4) and beating out Temple (242.05).

On pommel horse, junior Jacopo Gliozzi placed first with a 13.25 score. Freshman Spencer Schrandt’s career-high 12.1 also added to the College’s season-high score of 60.9 in the event.

The Tribe posted a season-high 69.6 on vault, with sophomore Tim O’Neill leading the way with his first-place score of 14.35. Junior Jack Hasenkopf posted a 14.1 on vault, which added to his score of 73.9 in the all-around. He was the Tribe’s only all-around competitor and took second place.

In addition to the College’s successful performances on parallel bars, pommel horse and vault, it also had athletes on the podium for high bar and floor. McReynolds took third on high bar, posting a career-high 13.25 and contributing to the Tribe’s season-high 63.8 in the event. On floor, where the College scored a total of 66.7 points, O’Neill and fellow sophomore Tomas Palma posted matching scores of 13.75 to tie for third place.

Gliozzi, McReynolds and junior Peter Makey competed on rings, adding to the Tribe’s season-high team score of 64.2. The three each scored 13.150 points in the event. Junior David Watkins posted a career-high 13.05.

The Tribe will be back in action Feb. 4 when it competes in the New England Championships hosted by Springfield.