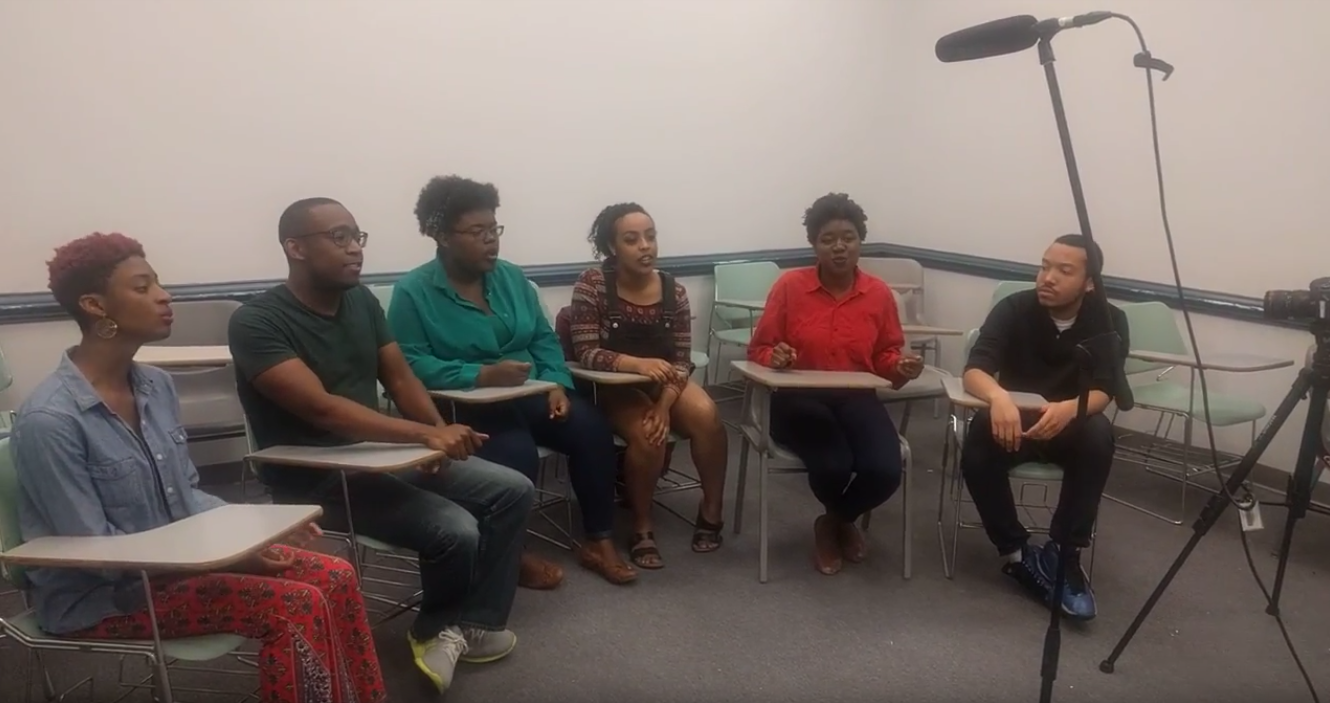 This piece was a collaboration between The Flat Hat Variety Editor Heather Baier and The Black Voice Editor-in-Chief Camryn Easley.

When Lynn Briley ’71, Janet Brown’71 and Karen Ely ’71 arrived at the College of William and Mary in the fall of 1967, 274 years after the College was chartered, they set down their bags in the basement of Jefferson Hall and breathed in the musty air of their new dorm room. They arrived on an almost 300-year-old campus as the first African Americans in residence; the College has been celebrating the 50th anniversary of their arrival last fall and this spring.

Former President of Ebony Expressions, Jasmine Brown ’17, said the group was founded so students had a safe place to worship and celebrate their Christianity.

“It was founded by a group of African American students who were trying to get more clubs of interest that they could go to and have a safe place,” Brown said. “They were also all Christian obviously because it’s a gospel choir and they wanted a place where they could feel comfortable to worship but also have a group of like-minded people with them.”

Brown grew up in church, enchanted not by the preacher’s sermons but by the words that flowed from the choir. Whether upbeat or slow and melancholy, she has always found a source of comfort and inspiration in gospel music.

“I grew up in church, so I knew how gospel music can really effect you emotionally so that’s the reason I joined,” Brown said. “It’s just a good way to release stress, come together with people that you consider family and talk about things that are going on, and we can pray for each other and be there for each other.”

During the Jim Crow Era and the arrival of the African Americans in residence and the civil rights movement, it was a source of hope for everyone that embraced the music.

Though not always stable in numbers, Brown said the choir has persisted throughout the years as a way for those who love gospel music to spread that enjoyment to others, regardless of race or ethnicity.

From notable beginnings performing for Maya Angelou, Ebony Expressions now congregates with other choirs from all across Virginia and performs during services in one of the first African American churches founded in the United States, First Baptist Church in Williamsburg, Virginia.

Reginald Fox, the director of music at First Baptist Church for the past 14 years, said Ebony Expressions is directly involved with the church. Using gospel as a way to connect, the church has always encouraged College students to particle in the choir and other areas of the church.

“One of the main connections we’ve had was directly with your gospel choral group Ebony Expressions,” Fox said. “I actually played for Ebony Expressions when they were in need of a musician. So we use gospel music as a way to connect and showcase how gospel music has been influenced by spirituals, by jazz, by blues. All of those genres that are secular had a direct influence in the music of the church. … Gospel music is a way to connect with social issues that are happening in the community.”

Fox said that besides Ebony Expression, he has started a small hand bell group that he encourages College students to join.

Hoping to connect with student and community members through gospel, Fox said he has been working with other parishes in the Williamsburg area to bridge the gap between different denominations.

“We’ve been able to connect with, for example, Bruton Parish Church and Williamsburg Presbyterian,” Fox said. “We’ve used gospel music as a way to bridge the gap across our denominations. … We just did a Martin Luther King program together. We combined our groups and did both a spiritual and a gospel piece.”

Harris made his hip-hop debut with a short CD when he was 16. Deciding that rapping was better left to professionals, Harris remained an avid fan of hip-hop music and eventually discovered two artist, Trip Lee and Tedashii, while in seminary.

With lyrics that not only touched upon but explored the identity of Jesus Christ and other deep theological concepts, Harris formed his graduate research thesis by listening to these artists explore religion and faith in their music.

Harris said that after his childhood where everyone he knew had a CD and hip-hop was an integral part of life in his neighborhood, his identity has been formed by the music itself.

“To me, it’s also part of that identity formation,” Harris said. “So, I can say that I am hip-hop, right? So, my ontological, okay my way of being, my daily life, my existence, the way I talk influences the way I dress, so all of these that shape my identity.”

Having brought in a third element to his analysis of hip-hop, Harris has begun exploring the connections between the music and social justice for African Americans.

“An argument that I raise is religion can equal freedom, so how is it that you can obtain freedom especially within the context of the African American freedom struggle,” Harris said. “So that’s where hip hop and justice comes in.”

Harris said that hip-hop can provide a voice for marginalized groups while fighting systemic racism and provide an identity for those who relate to the music. He said his music is often received poorly and through his research he strives to create a better understanding of the issues hip-hip artists tackle in their lyrics.

As a previous organizer for Black Lives Matter, Harris said that hip-hop is always a part of his identity, no matter what job he holds.

“I’m trying to deal with the misconceptions of hip-hop. … It provides identity, motivation, perseverance and a voice for people to proclaim who they are, right? But even further there are those who I can say I am hip-hop even though I’m not like one of the elements, I’m not an MC or a rapper or beat boy but I’m hip-hop but I’m also active in fighting systemic racism,” Harris said.

“I can do something with this”

Ka’myia Gunn ’19 grew up in a musical household and began singing as a child. As she grew older, she became increasingly interested in writing her own music. Initially, she would come up with short choruses about the events of her day. Then, in her senior year of high school, she began writing multiple stanzas of lyrics and putting them to music.

Gunn said she remembers thinking, “Okay, I can do something with this,” when she listened to the playback of her first song.

She then let a friend who wrote and produced his own music listen to her song. He was very impressed and encouraged her to continue to write and foster her talent.

Gunn describes her style as a fusion of rhythm and blues, hip-hop and gospel. Her lyrics are inspired directly from her personal experience and the experiences of those around her.

“When there’s an emotion or story that I can’t truly explain in words, I just turn to singing,” Gunn said.

Last spring, Gunn had an impromptu performance with members of Students of Hip Hop Legacy and with several jazz musicians, during which they improvised a song about empowering women who are victims of domestic violence. In the future, Gunn aims to become consistent with releasing her projects. Overall, she said her goal is not to become the next Beyonce; she just wants to feel content with the quality of her work.

To this day, music remains an ongoing and constant presence in her everyday life. Gunn says that she relies on music as a form of support and part of her identity. Historically, black people have used music as a coping mechanism and means of self-expression. Slaves, Civil Rights activists and congregations all sang songs of hope and unity. Gunn emulates these messages in her own music.

At a young age, Jordan Gilliard ’18 was able to sing along with the gospel music her parents played in the car. By her senior year of high school, she was able to seamlessly combine baroque and renaissance training with her jazz and R&B background to create unique melodies and “open-minded” music. Her lyrical content ranges from personal experience to protest music to abstract instrumentals.

“As long as I have something with a good beat and really nice harmonies … that’s all I’m interested in creating,” Gilliard said.

Oftentimes, a random melody will come into her head, and she will rush to Earl Gregg Swem Library to record it.

“I can spend hours on it,” Gilliard said. “I can spend six hours and it feels like 30 minutes. That’s how I know I’m meant to be doing this.”

As a freshman at the College, Gilliard recognized that there were several biases taking place towards minorities in the a capella community.

“I started realizing there were some issues, some inequities, going on, biases regarding race and microaggresive stuff,” Gilliard said.

She was not content with the limitations of the music they were singing and felt like she couldn’t be herself.

Instead of giving up on a capella, Gilliard showed initiative and started her own group Featuring Lyrics of Our Worlds, or FLOW, along with Yemi Zewdu ’18.

“[FLOW is] a music group that was intended to be a safe musical space for those who want to sing underrepresented genres on campus, such as R&B, gospel and underrepresented sounds,” Gilliard said.

Through arranging and singing with FLOW, Gilliard said she wants to want to make sure her culture is accurately presented in her music.

“[I want to] make sure that [my] cultural origins are properly demonstrated and honored. … I want our art to survive the cultural appropriation and whitewashing of R&B,” Gilliard said.

Dec. 7, FLOW had its first showcase on the Christopher Wren Building stairs. The audience was comprised of members of different racial and musical communities. After the show, a student came up to Gilliard and told her that the showcase was the first time a group made her feel something during a performance.

“Someone at the end [of our performance] who was part of the a capella community they were just like, ‘You know, that was the first time I really like just felt from a group,'” Gilliard said.


This compliment encouraged Gilliard and let her know that her decision to create FLOW was making a difference at the College.

You can catch Gilliard humming along (or singing if she’s feeling extra self-confident) to one of her many Spotify playlists while walking around campus, or you can catch her at the FLOW auditions Friday, Feb. 9. FLOW auditions are an open call to all singers and vocalists of all musical backgrounds and skills. See @flowatwm on Instagram and Facebook for details.

“In a previous version of this article, the article incorrectly stated that Jordan Gilliard was the sole founder of FLOW. Yemi Zewdu is also a founder of the group which was incorrectly listed an an instrumental group, but has since become an acapella group. Jordan Gilliard was also misquoted at the end of the piece. The correct quote should read “Someone at the end [of our performance] who was part of the acapella community they were just like, ‘You know, that was the first time I really like just felt from a group.'”